It Does Have Something to Do with Me

Thank you for joining us on the High Plains Public Radio Station. My name is Jessica Sadler, and I am a Science Teacher and STEAM facilitator in Olathe, Kansas. I am here with the other book leaders to discuss The Beekeeper of Aleppo by Christy Lefteri.

This novel is the author’s fictional work of the Syrian people leaving Aleppo and fleeing to Europe during the Syrian civil war. While it is a work of fiction, the author has based it off her time volunteering at a refugee camp in Athens.

This novel has been selected to explore the 2023 Spring Read theme– In Touch with the World.

The novel begins with the Syrian beekeeper, Nuri, discussing his wife and the blindness she now faces due to the traumatic events that have befallen their family after the war makes its way to Aleppo. They are working to find asylum traveling from Turkey to Greece to England as the novel unfolds. It is often easier to go through life not fully acknowledging the darker parts of past or current events for both nations and individuals.

This survival tactic tends to be verbalized sounding something like, “It has nothing to do with me” While no one person or group can take on all the burdens of this world,

it is important that the themes are recognized because they travel and touch everyone at some point.

As a teacher, I was particularly struck by the quote, “I wish I could escape my mind, that I could be free of this world and everything I have seen in the last few years. And the children who have survived - what will become of them? How will they be able to live in this world?” I believe anyone who works with children has had a thought that resembles the last two lines. I can say I surely have.

From school shootings becoming more common to returning to schools from remote learning, the youth of our country and others are experiencing turbulent times beyond their years. The struggles and sometimes horrors witnessed at my student’s homes during remote learning and home visits will stay with me all the days of my teaching career and beyond. I believe it is my role as an educator to not only help them on their path for learning but to help guide them alongside humanity that has forgotten them until they are a certain age.

The novel goes on to discuss the journey of the beekeeper and his wife from events before the war, during the war, after the war, and dreams. I really enjoyed many of the quotes and themes in this story, but I found a moment of pause when the author wrote, “People are not like bees. We do not work together; we have no real sense of a greater good –”

My first reaction was that I staunchly disagreed but then I began to think longer and discovered my disagreement was not as strong. Bees tend to present as creatures who do everything for the hive and their queen. Oftentimes their actions may mirror monarchy governed countries. However, their work front seems to be united. Humans tend to put up a united with like- minded peers to gain a desired outcome but internally are often governed by what suits them best as an individual.

How many historical events throughout history could have different versions if more people were able to truly work for the good of all than putting self first?

I will leave you with this quote, “But if we had known, what would we have done? We would have been too afraid to live, too afraid to be free and to make plans.”

This is Jessica Sadler, and you are listening to the High Plains Public Radio Readers Book Club. 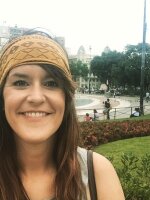