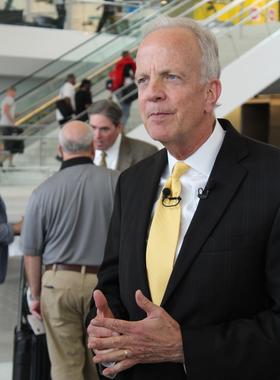 Republican Kansas Sen. Jerry Moran says he doesn’t support the health care overhaul bill in the U.S. Senate. Leaders in the Senate announced Tuesday that they are delaying a vote on the bill over concerns that it didn’t have enough support.

Moran initially was one of the undecided lawmakers. That changed when the vote on the GOP plan was delayed: Now, he says the Senate bill “missed the mark” for Kansas and he would not have supported it.

Moran says he's glad the vote was delayed and says the full legislative process should be used to develop a better proposal.

Kansas' other senator, Republican Pat Roberts, already came out in support of the Senate bill, saying it wasn’t perfect, but they needed to move the process forward.

NPR broke down how the Senate bill compares to one in the House and the ACA:

Stephen Koranda is Statehouse reporter for Kansas Public Radio, a partner in the Kansas News Service.

Sebelius: Republican Health Care Plans Are ‘A Very Cruel War On The Poor’

In a post Tuesday on the Health Affairs blog, former Secretary of Health and Human Services Kathleen Sebelius calls the Republican health care plans passed by the House and proposed by the Senate “a very cruel war on the poor.”

Disability rights advocates are among the strongest opponents of the Obamacare replacement legislation that Republicans are attempting to push through Congress.

If anything resembling the bill that the U.S. House approved in May or the one the Senate is considering passes, they say it will roll back decades of progress.

Oklahoma marketplace in danger of losing its last insurer

Oklahoma may lose its last insurer on the healthcare marketplace next year, reports KFOR. The number of insurers on the Oklahoma exchange has fallen after several carriers sustained significant losses.

Oklahoma Insurance Commissioner John D. Doak noted the “absence of legislative action to create a solution that can restore the stability of our health insurance system.”

Kansas freshman Republican Congressman Roger Marshall is getting a baptism of fire as he campaigns for the American Health Care Act — the bill Republicans introduced this week to repeal and replace the Affordable Care Act, better known as Obamacare.

Kansas U.S. Sen. Pat Roberts is not enthusiastic about the Senate’s version of the Obamacare replacement bill.

Nevertheless, he supports it.