Amazon celebrated the grand opening of its third "fulfillment center" in Kansas on Tuesday.

The new 850,000 square-foot Kansas City, Kansas, began operations on August 6, 2017; other facilities were already operating in Lenexa and Edgerton. The centers serve as the conduit between an online order on Amazon to the shipment to the customer.

The new facility is the first in the state to equip robots, several hundred of which operate along with 2,000 full-time employees.

As soon as a customer places an order, a small orange robot retrieves the product from the warehouse and delivers it to an employee, who begins the packaging process. Three floors of the facility are dedicated to selecting and stowing the products before they head to the third floor for packaging.

"The robots can't work without the people," Director of Operations Nikki Taylor White told KCUR. "That's the beauty of it. The robots are going the distance. The folks working here are using their minds."

Currently, White said, 200,000 packages are being packaged and shipped daily at the facility, which operates 22 hours a day, every day. During the holiday season, an additional 1,000 jobs will be available, White said. 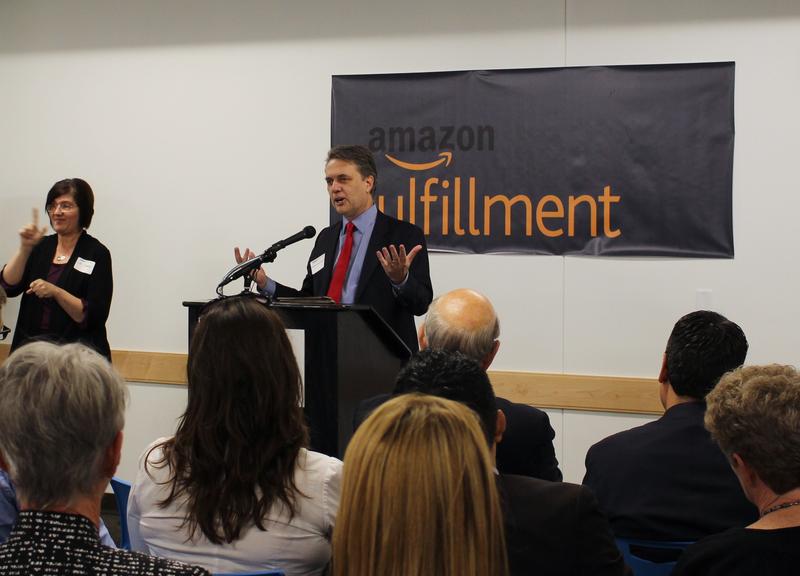 "When we talked with Amazon about coming to Kansas, they were interested in great people that show up for the job, that can do high-tech things, but also grow in their job. That was important for us," Colyer told KCUR.

The deal to bring the fulfillment center to Kansas City came together under the administration of former Gov. Sam Brownback.

Kansas Rep. Kevin Yoder said this development reflects positive economic growth in Wyandotte County and the Kansas City area. But he said he was also mindful of other news this week: the looming merger between T-Mobile and Sprint and what that might mean for Kansas City jobs.

"I'm very concerned about the merger," Yoder told KCUR. "I'm always concerned when a Fortune 500 headquarters moves out of Kansas City to another state."

Andrea Tudhope is a reporter at KCUR 89.3. Email her at andreat@kcur.org.

Amazon’s largest wind farm to date is up and running in West Texas, reports Engadget.com.

The entire operation includes over 100 turbines and will generate enough clean energy to power more than 330,000 homes. Amazon plans to take whatever energy it needs from the farm, then sell the rest to the state’s energy users.

The online retail giant Amazon announced a deal in June that showed its latest ambition: to completely change how America gets its food.

The latest step toward that goal is a proposed merger with Whole Foods Market, worth nearly $14 billion. The deal recently passed a key hurdle after the U.S. Federal Trade Commission decided the sale  would not hamper competition or provide an unfair advantage.

Amazon will soon begin charging a sales tax in the Sooner State, reports The Oklahoman.

The online retailing behemoth will start collecting the tax beginning on March first. But, unfortunately, those extra collected funds will not go toward easing the burden of Oklahoma’s massive budget shortfall.

That’s because the extra Amazon revenue was already built into Oklahoma’s budget estimates.

The many steps of the donated clothing process

Amazon is teaming up with Goodwill to make donating as simple as filling up a box.

Amazon has plans to invest in a massive Texas wind farm, according to FuelFix.

The Seattle-based online retail giant is teaming up with Chicago’s Lincoln Clean Energy to build a 250-megawatt wind farm in Scurry County, west of Abilene. The company plans to begin operations in 2017.

The wind farm will feature 100 wind turbines which will power Amazon’s Texas’ facilities, with the leftover energy feeding into the overall state grid.