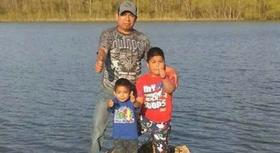 Like Jamal, Crecensio Mendez-Ramirez, a Mexican immigrant, was allowed to stay in the United States under an order of supervision. But when he checked in last week with agents of Immigration and Customs Enforcement (ICE), as he was required to do once a year, they unexpectedly detained him.

And unless an immigration court judge issues a stay, the 43-year-old Mendez-Ramirez may be deported to his native Mexico as soon as Friday.

Mendez-Ramirez, who has four children, two of them U.S. citizens, was given no advance warning that he’d be detained. He’s currently being held in a jail in Versailles, Missouri.

“He never had any missed appointments and never had any criminal convictions or anything,” says his attorney, Jonathan Willmoth. “And so he had to work hard based on this order of supervision and that card is still good until Dec. 28 of this year.”

Willmoth says that when his client showed up for his check-in last week, he was simply detained without explanation.

“They didn't call them ahead of time and say, ‘Hey, you need to turn yourself in.’ Or ‘Hey, bring a bag of 40 pounds of your stuff with you’ like they would have done previously when someone had an order of deportation. He just came in for his check-in the same way he had been doing, honestly, for like eight years. And he didn't expect anything to happen.”

A petition on Change.org asks the Department of Homeland Security not to deport Mendez-Ramirez. It says he and his family fled Guerrero, Mexico, “considered one of the most violent states in Mexico,” in 2006 “to give their sons opportunities they never had.”

“They feared for their children’s lives and their future because of the highly violent drug cartel activity in Guerrero,” the petition states.

In an eleventh-hour move to stave off his deportation, Willmoth on Thursday filed an emergency motion in immigration court in Kansas City. It asks the court to reopen a 2010 order that directed Mendez-Ramirez's removal from the country after he failed to appear at a hearing in 2009.

That happened after he was arrested for driving without a license. At the time, he was living in Marshall, Missouri. He later moved to Kansas City. It’s unclear whether he provided his new address to ICE, but he claims he didn’t show up at the hearing because he wasn’t notified.

Despite that, ICE placed him under an order of supervision, allowing him to live and work in the United States.

In 2014, Mendez-Ramirez applied for a stay of removal after an ICE agent told him the agency couldn’t guarantee the order of supervision would last forever.

“And in a kind of weird twist, they denied the stay of removal, but they granted him the order of supervision again and they continued it now for four more years,” Willmoth says.

Now that ICE is attempting to deport him, Mendez-Ramirez is seeking asylum in the United States on the grounds his life would be imperiled if he was sent back to Mexico.

Mendez-Ramirez “wishes to affirmatively apply for asylum … because he fears being targeted by cartels in Mexico due to his family relationships and imputed social group as a witness to crime,” his motion states.

Jamal, the Bangladeshi-born professor who is now in Platte County Jail awaiting a decision on his fate by the Board of Immigration Appeals, has similarly said he faces physical danger as a member of an ethnic minority if he is returned to Bangladesh.

Jamal, too, had been under an order of supervision allowing him to live and work in the United States. And like Mendez-Ramirez, he assumed he was not being targeted by ICE until ICE agents picked him up in front of his Lawrence home while preparing to take his daughter to school.

Asked how many of his clients fit the same description – namely immigrants under orders of supervision who could be subject to deportation – Wilmoth says there were at least 20.

Dan Margolies is a senior reporter and editor for KCUR. You can reach him on Twitter @DanMargolies.