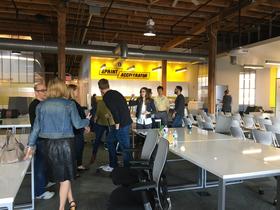 Some 86 percent of those businesses were created “to pursue opportunity rather than from necessity,” says Arnobio Morelix, a Kauffman senior research analyst. There are two reasons behind the growth, he says.

“Immigrants are about twice as likely as the native born to start a new company,” Morelix says, “and also the U.S. has seen a growing immigrant population in the past couple of decades.”

Still, startup creation remains in a long-term decline when compared to the 1980s, Morelix says. He blames an aging U.S. population and “lower levels of business dynamism,” thanks to industry concentration, globalization and automation putting some companies out of business.

Kansas City also came out well in the Kauffman Index, moving up from number 19 last year to number 15 on the list of metropolitan areas with the highest startup activity. Morelix credits the increase to a connected community of entrepreneurs and the introduction of Google Fiber in 2011.

“It’s not like the new bandwidth of the Internet changed the game,” he says. “What did change the game is, it brought people together and people got excited and they realized hey, there’s something happening here.”

Other findings from the survey include:

Two independent film makers are in production on a new documentary film focusing on Garden City.

According to a press release, film makers Bob Hurst and Tess Banion – in collaboration with lifelong Garden City resident and former mayor Nancy Harness - are exploring the history of Garden City, Finney County and the many immigrant groups that have come to call the area home over the last 100 years and beyond.

In Colorado, one in 10 residents, or just under 533,000 people, were born in another country, making them a vital part of the state’s economy.

Citizens of Garden City, Kansas and Amarillo, Texas participated in yesterday’s “Day without immigrants” protest, intended to showcase the role immigrants play in the national economy.

As The Garden City Telegram reports, the absentee rate at Garden City public schools Thursday was higher than usual, with 18.5 percent of the district’s 7.713 students absent. And nearby Tyson Fresh Meats, the area's largest employer of immigrants, also reported higher absenteeism, did not provide specific numbers.

Amarillo saw something of the national spotlight in the wake of President Donald Trump’s controversial travel ban.

A Yahoo News story noted that Amarillo has long been a safe haven for refugees. For the last several years, Texas has led the United States in refugee resettlement and Amarillo accepts more refugees per capita than any other city in the state. Amarillo has, for the most part, provided a welcome home to these settlers fleeing terror in their homelands.