A surge in the number of babies born with syphilis in Texas reflects newly released national numbers from the Centers for Disease Control. Meanwhile, the number of cases in Bexar County has remained steady. 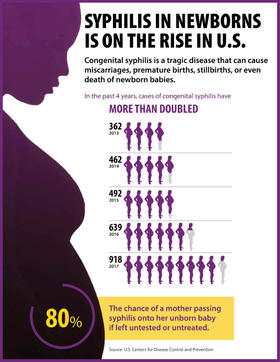 Nationwide, new numbers from the CDC state that 900 babies were born with syphilis last year. That’s more than double the number in 2013, and a 20-year high.

Texas Department of State Health Services spokesman Chris Van Deusen said while there are certainly more babies being born with the sexually transmitted disease in Texas, the state is also trying harder to recognize it when it happens.

"We've been doing some enhanced surveillance. We have some new employees at the state level that are really looking at an evaluating congenital syphilis and identifying more cases, so it seems to be both an increase in cases and an increase in identifying cases that had been missed previously,” Van Deusen said.

In Bexar County, 11 babies were born with syphilis in the county in 2017, down from 13 the year before.

"We are going out into the community and actively looking for these pregnant women who are at high risk for syphilis and recruiting them into our program and making sure they have the adequate case management, adequate connections with OB-GYNs, and receive timely and adequate prenatal care," Kurian said.

Even with this program, 11 babies were born with syphilis in 2017, so the program isn't getting to everyone. 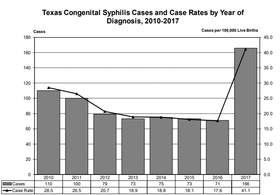 "It's mainly the uninsured and underinsured, and more often than not we see them in emergency rooms at the time of delivery,” Kurian said.

Van Deusen said it is a state law that women be tested for syphilis in both the first and third trimester. However, since some women are not getting prenatal care, Kurian also recommended testing women at the time of delivery. That’s because if they pass the infection on to their babies during pregnancy or delivery — as 80-percent of infected mothers do — the consequences are dire.

Up to 40 percent of those babies die shortly before or after birth. Of those who survive, many will have deformities, delays in development, and seizures.

If a mother is diagnosed at the time of delivery and she has not yet passed the disease on to her child, a delivery by cesarean section might reduce the risk that the baby will become infected during a vaginal birth. If diagnosed in time, treatment is simple and inexpensive: a shot of penicillin.

Bonnie Petrie can be reached at bonnie@tpr.org or on Twitter @kbonniepetrie