In winter, farmers across the U.S. visit their banks to learn whether they have credit for the next growing season, relying on that borrowed money to buy seed, fertilizer and chemicals.

But prices for corn, soybeans and wheat are low enough that some producers have had a hard time turning a profit, and financial analysts expect some farmers will hear bad news: Their credit has run out.

That's what happened to the Delaneys, a family now trying to save their farm near Fremont, in eastern Nebraska.

Listen
Listening...
/
Harvest Public Media's Grant Gerlock talks with a family that's trying to save their farm from financial ruin.

The headquarters of the farm is an office inside a steel machine shed, where they repair broken-down tractors and equipment. Several years ago, when crop prices surged, the family gathered in this office and planned to grow the farm.

“More acres, more income. That’s the old philosophy,” said Tom Delaney, who runs the farm with his son, Tim, and daughter-in-law, Jody. They built it up to 2,500 acres — more land than most farms in the area — but when grain prices fell it was more than they could afford. 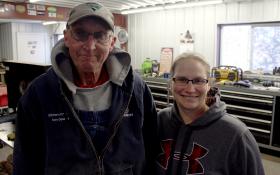 In that same office nearly two years ago, Delaney says two lenders from their bank, Farm Credit Services, told them their farm was in a financial tailspin. The lenders “basically said we’re not going to back you up anymore and you need to sell out,” Delaney said.

The family couldn’t cut costs enough to convince the bank that they could pay back their $1.8 million debt.

The vast majority of farms in the U.S. are not in as much financial trouble as the Delaneys. Farms that own their land tend to fare better because they don’t have to pay rent, and the value of the land gives them more borrowing power.

Help on the way?

While the financial pain may be limited across the industry, every day is a crisis for the individual farms that lose their loans.

“It’s hard for those from a generational farm, feeling a sense that they’re the generation that could be losing the farm,” according to Michelle Soll, the director of the Nebraska Rural Response Hotline. It was established during the 1980s farm crisis to provide financial and legal advice and family counseling. Surrounding states offer similar services, such as Iowa Concern or the Kansas Rural Family Helpline.

Jody Delaney says her days have been consumed with efforts to fight off foreclosure and save both the farm and her family.

"There were a couple months when they called our loans that we had nothing," she says. "If it wasn't for some odd jobs, our family would have gone hungry and our animals would have, too."

She also says she and her husband considered divorce “because we were fighting, because of the stress.”

Soll says she advises farmers to be detailed and honest about their business plans when meeting with their lenders because refinancing with a new bank can be a tall task. When one bank says no, it’s not as easy as going to the next one.

The Farm Service Agency, which is part of the UDSA, can help producers secure credit by lending money directly or by guaranteeing bank loans. In 2017, the FSA issued $6 billion in new credit, and is currently working with more than 120,000 farm families. But there are limits: Direct microloans go up to just $50,000, and loan guarantees top out at $1.4 million.

That may seem like a lot of money, but it doesn’t go as far as it used to. Just one acre of cropland in the U.S. is worth $4,000 on average. And those big loans are leaving farmers with fewer options.

"When debt rises to that point, it does limit your pool of lenders," Nebraska Farm Business, Inc., financial analyst Tina Barrett says. "It might be time to liquidate some assets, pulling that debt down, so that you are more marketable to different banks."

Scaling back and up

The Delaneys have downsized to about 500 acres, switched to growing non-GMO crops (which bring in more money than traditional crops) and revamped their farm since losing their loan. There's now a hog pen, where pink and red Berkshire hogs root around in the dirt and make a clatter as they lift and drop the flaps on their feeder bins.

These animals are another part of the Delaneys’ rebuild, with a plan to raise about 2,000 hogs a year for Heritage Foods, which supplies upscale grocer Whole Foods.

Jody Delaney says her father-in-law was not on board with the idea at first, “but now I don’t think he’d change it for the world. He’s with these hogs every day, sometimes five or six times a day, checking on them to make sure they’ve got food, water, heat.”

Tom Delaney shrugs and reaches into the pen to pat a pig on the back. “If that’s what it takes to pay the bills it’s what we’re gonna do,” he says.

The farm is still in debt and the bank could foreclose on it, but it is earning a profit again. The Delaneys say this is their chance to save the family farm — if they can find a bank that feels the same way.

There’s an eerie silence among aging farmers but that doesn’t mean they aren’t struggling.

As Politico reports, in recent months, lawmakers introduced legislation to make sure young farmers have their voices heard in the next farm bill.

After years of declining income on America’s farms and ranches, the agricultural sector might have finally hit the floor.

The latest figures from the U.S. Department of Agriculture expect farmers to bring in more money this year than initially projected. Crop and livestock producers could net $63.4 billion in 2017. That would be an increase of nearly $1 billion from 2016, and would be the first time farmers see a rise in net farm income year-to-year since 2013.

For Texas Farmers, Access To Overseas Markets Is Critical

A lot of Texans will be paying close attention Monday to the words and tone of President Donald Trump as he addresses farmers and ranchers at the American Farm Bureau Convention in Nashville. At a time when Texas is growing in population,  becoming less rural and more urban than it was 10 years ago, advocates say rural issues are no less important than they once were. And that's the message Trump aims to send during his Farm Bureau speech. But what do Texans want to hear, especially on issues such as the North American Free Trade Agreement, or NAFTA?

Study Finds Suicide Rate Among Farmers Higher Than Any Other Occupation

Suicide rates among farmers are at a higher rate than other occupation in the United States.

As The Guardian reports, last year, a study by the Centers for Disease Control and Prevention (CDC) found that people working in agriculture – including farmers, farm laborers, ranchers, fishers, and lumber harvesters – take their lives at a rate higher than any other occupation.

Roger Sewell slowed his pickup down on a rural section of Pratt County, next to a field gleaming white.

“How’s it look?” he said with a grin, then added this good field of cotton, to be stripped in coming weeks and eventually turned into denim, was his.

Just a few years ago, it was tougher to find a cotton field in these parts. The fledgling industry had been struggling to regain its footing after peaking in acres more than a decade ago. High corn prices and 2,4-D drift were among the culprits causing farmers to shy away from cotton.