How High Is Too High For Kansas Graduation Goal?

Today, about three of every 20 students in Kansas fail to graduate from high school. Gov. Sam Brownback contends that in five years only one will fall short.

That would vault Kansas from the middle of the pack to rise above a level no state in the country hits today.

Education experts question if it’s realistic. The governor and the education department, they say, ask for too much too soon. After all, the early years of school weigh heavily. Work with kids learning their alphabet and colors -- as much as those studying capitalism and algebra -- can determine later who sticks it out.

And some warn that pushing for too much too fast could backfire.

Still, this week Brownback set the ambitious goal to hit the mark by 2023. The Kansas State Department of Education hopes to hit that 95 percent graduation in 2026.

“Is it going to be hard? Yes,” says Kansas Education Commissioner Randy Watson. “I won’t say it was going to be easy, but we do think it’s a realistic, ambitious goal."

The most recent figures show just shy of 86 percent of Kansas kids get their high school diplomas. That’s slightly above the national average, which is at a record high. Iowa leads the nation at 91.3 percent. 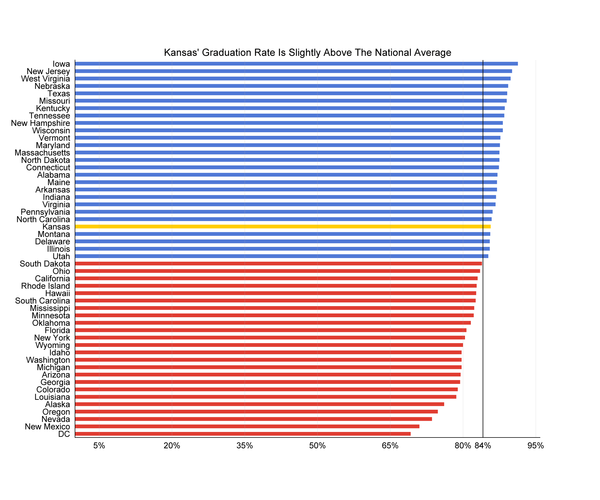 Experts don’t know what the ceiling is for graduation rates. There will always be some people who don’t graduate, says Russell Rumberger, director of the California Dropout Research Project and a professor at University of California, Santa Barbara.

If 95 percent is within reach, he says, it won’t come in the next five years.

“That’s less realistic, I think, to do it in that short amount of time,” Rumberger says.

It’s simply hard to deliver better graduation rates quickly when so many of the factors that make a difference start at the beginning, even preschool.

“That’s not to say there’s not things that can be done in high school to get the graduation rate up,” Rumberger says. “I’m just saying to reach a really high number is going to involve more than just changes in high schools."

A rush to increase the graduation rate too quickly might actually hurt.

Watson, the education commissioner, told the Kansas Board of Regents that a fast upturn in graduation rates might signal the system is being gamed. It could reflect simply reflect a drop in standards -- perhaps in response to the pressure to meet an unrealistic goal.

Yet Watson said the target could be reached by 2023, without cheating. By tracking other measures, like how prepared students are for college, educators can keep the numbers honest.

Whatever happens in classrooms, other factors will weigh heavily. For instance, home and health issues can lead to multiple absences, a strong indicator that a student will drop out.

All those complications make reaching such a high graduation rate difficult. Even large-scale change might not be enough.

“It's very, very difficult,” says Elaine Allensworth, the director of the University of Chicago Consortium on School Research. “I’m still not sure if you can achieve it."

A study released yesterday by the Annie E. Casey Foundation has found that black and Hispanic children in Texas have significantly more barriers to success than white and Asian students. These barriers include poverty, health care availability, and access to a good education.

Is A 1995 Education Study Harming Low-Income Students In Texas?

In this new method, kids are given much more freedom to decide who to work with and which projects to initiate, and they’re allowed to ask questions without raising their hands. The result? The kids scored 30 points higher on tests than students in traditional classes.

Seems like cause for change, right? Not so fast.

Kansas education officials did little to promote a public comment period for a school accountability plan designed to steer the state through 2030 and guide nearly $2 billion in federal spending.

While some states that publicized town halls and launched online surveys for their plans collected comments by the thousands, Kansas officials didn’t use such tools nor issue news releases or social media posts about the state’s public comment period.