In the ongoing struggle on college campuses for LGBT equality and acceptance, Kansas State University is an unexpected leader.

K-State is best known for agriculture and football.

On a gorgeous fall day in Manhattan, with the K-State marching band entertaining tailgaters, many fans were surprised to learn that their school was ranked in the 25 campuses for LGBT friendliness by CampusPride.org.

"That’s not the stereotype of Kansas State," says Aaron Reed from Tonganoxie, who received his undergraduate degree from K-State in 1995 and his doctorate in 2004. Reed says he has not been on campus much in the past decade but calls the rating "great."

Mike Clark, a 1993 graduate from Mission, says K-State certainly had a conservative feel when he was in school but he always thought of Manhattan as a melting pot.

If this was a story about the University of Kansas, few would bat an eyelash.

But it’s about a university on the edge of western Kansas and generally perceived as conservative. 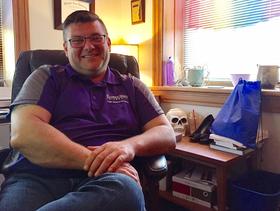 So how did K-State get here?

By most accounts, much of the credit goes to Brandon Haddock, the coordinator in the LGBT Resource Center in the Office of Student Life.

Haddock didn’t start out at K-State to transform LGBT life on campus. He came in 2007 for his doctorate at a time when he says there was "no LGBT community in town."

In 2009, K-State was given 1.5 stars out of five by Campus Pride. The school now rates five out of five stars. Haddock says when he took the job running the LGBT Resource Center he started making friends and allies in all departments.

“What we’ve been able to do at K-State is make sure that colleges like the College of Ag and the College of Engineering that they recognize we have those relationships built, and we have people who are open and affirming about their identity," he says.

The other person who changed the climate for LGBT students was former president Kirk Schulz who made it a priority. In 2009, K-State was the only university in Kansas with an LGBT resource center.

Schultz left for Washington State last year, but his successor, Richard Myers, is just as committed.

In fact, Myers says he wants to strengthen K-State's diversity in other areas. Right now, the university is searching for a chief diversity and inclusion officer. "He or she will report to me directly and be on the president’s cabinet, which is our senior body that does, deliberates university policies and so forth,” Myers says.

If there’s a place where K-State’s friendly atmosphere towards LGBT students is most evident, it’s at the annual drag show that now sells out the 1,500 seat McCain Auditorium. 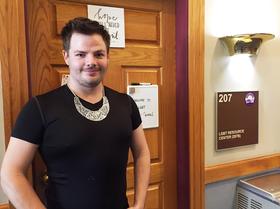 Theater major Drew George from tiny Uniontown, Kansas is in his fourth year in Manhattan and says he’s seen a lot of change.

“It’s grown so much since I’ve been here," he says. "It is such a big presence on campus. Like, they did the drag show last year, and they sell out McCain almost every year and that’s just an amazing thing to see."

It is a much different experience than his hometown or in Fort Scott where he attended community college before coming to Manhattan.

“Back home it wasn’t something that anyone even discussed," he says. "Once I got here and began to see the opportunities that were available, that was an eye opening experience.”

Most of this has happened quietly, but that is changing.

We got a hint of how K-State has changed when Scott Frantz, who starts at left tackle for the Wildcats, came out as gay in July during an ESPN interview.

“I’ve never felt so loved and so accepted ever in my life then when I did that,” he told the network about coming out at a team meeting. "Ever since then it’s been great. I’ve grown so much closer to my teammates since then so it’s been an amazing experience.”

Before Frantz came out, KCUR reported on how K-State is actively recruiting DACA students.

Haddock says the university's has to prepare students for a life outside of K-State.

“I don’t want a student to go out in the world and have problems in the work place because they are suddenly presented with somebody, working side-by-side with somebody that is a lesbian,” Haddock says.

Sam Zeff covers education for KCUR and the Kansas News Service and is co-host of the political podcast Statehouse Blend Kansas. Follow him on Twitter @SamZeff.

A federal appeals court upheld a Nebraska law which requires picketers to stay 500 feet away from funerals. This is another step in the fight between the courts and the Westboro Baptist Church.

The Topeka-based Westboro Baptist Church protests funerals using anti-gay slur filled signs. The church believes that the U.S. is being punished by God for supporting homosexuality.

LGBTQ rights have re-entered the conversation in the Texas Panhandle.

A Republican lawmaker has introduced a bill that would require public school teachers to inform a student’s parents when they learn of a student’s sexual orientation or gender identity, even if that student wants the information to be kept a secret.

Sarah Goodfriend and Suzanne Bryant were married Thursday morning in Austin. The county clerk issued the couple a marriage license based on a court order. Theirs is Texas' first same-sex marriage. The order, the county clerk's office confirms, will only apply to this one couple, one of whom is "medically fragile."

Kansas’ universities will see increased tuition for the 2017-18 academic year.

The Kansas Board of Regents passed tuition increases for state universities, according to a press release issued Thursday.

Like many other professions, rural Kansas is falling short on teachers, but so are some urban areas in the state. A new program at Kansas State University aims to change all that.

As KCUR reports, K-State has developed a one-year, online program for those with undergraduate degrees to take to get a masters’ degree in elementary teaching.

A letter from federal lab regulators cites K-State's "history of non-compliance" that has "raised serious concerns" about the school's ability to safely contain dangerous pathogens.