A local Kansas GOP official has resigned after making disparaging remarks about Kansas congressional candidate Sharice Davids, writing "Your radical socialist kick boxing lesbian Indian will be sent back packing to the reservation."

On Sunday night, Michael Kalny, former GOP precinct committeeman of Shawnee, Kansas, made the remarks in a private Facebook message to Anne Pritchett, a chapter president of the Johnson County Democratic Women. 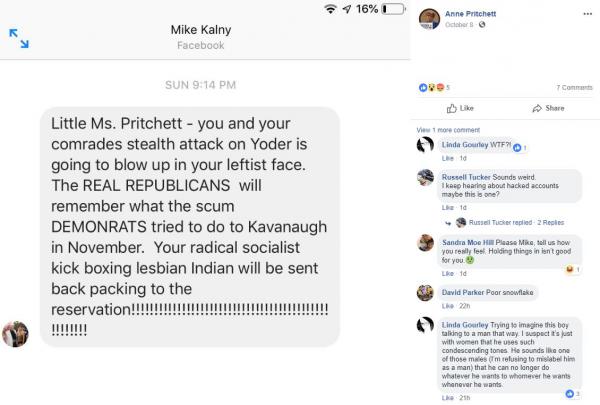 Pritchett said she was surprised at first.

"But then I laughed. If he had a candidate who he was proud of and could tout his accomplishments after four terms in Congress, then he wouldn't see the need to send hateful private messages to supporters of his opponent on Facebook," she told KCUR.

Kalny did not respond to requests for comment. But Johnson County Republican Party Chair Mike Jones confirmed Kalny had offered to resign Wednesday morning. Jones said Kalny expressed that he "didn't want to bring unwanted attention to the party."

Jones said the comments were "clearly inappropriate" and clarified Kalny is not a spokesman for the Republican party.

"It's concerning any time you hear comments like that," Jones told KCUR. "There's too much hostility in politics right now. This is not an isolated incident, and not one related to one party or the other."

The attack on the Democratic candidate comes in the midst of a close race for Kansas' 3rd District congressional seat between Republican incumbent Kevin Yoder and Davids, a political newcomer. If elected, Davids would be the first openly gay member of Congress from Kansas, and the first Native American woman lawmaker in Washington, D.C.

"With a non-traditional candidate in three or four different ways, having disparaging comments made at least somewhat publicly about that candidate is really common," said University of Kansas political scientist Don Haider-Markel.

Haider-Markel told KCUR it's possible this could influence the election.

"It will be ignored by plenty of Republicans, it certainly is going to turn off some moderate Republicans, and it just might mobilize supporters of Davids," he said. "But I have a hard time imagining it's going to change somebody's vote that's already decided how they're going to vote."

In a statement, Yoder's campaign spokesman C.J. Grover said the Republican "doesn't believe this type of rhetoric is appropriate at all."

"These kind of nasty personal attacks are all too prevalent in politics these days, and it needs to stop," Grover said.

Andrea Tudhope is a reporter for KCUR 89.3. Email her at andreat@kcur.org, and follow her on Twitter @_tudhope.

In the final month before the November elections, Republicans and some Democrats are asking: where is Sharice Davids?

Davids, a Democratic newcomer, seems to be leading the race against Republican incumbent Congressman Kevin Yoder in the 3rd District of Kansas.

The Davids campaign says the first-time candidate raised $2.7 million between July and September. In that same period Yoder, running for a fifth term in the Kansas 3rd District, raised almost $1.3 million.

Republican State Senator From Kansas Punished For Endorsing A Democrat

The punishment was swift for a Republican state senator who crossed party lines to endorse a Democrat trying to unseat Congressman Kevin Yoder.

Sen. Barbara Bollier, a moderate from Mission Hills, Wednesday morning threw her support behind educator Tom Niermann, one of six Democrats running in the August primary.

U.S. Rep. Kevin Yoder, R-Kansas, is responding to a letter demanding he take action to end the Trump administration's policy of breaking up immigrant families at the U.S.-Mexico border.

Nearly 60 elected officials from Johnson and Wyandotte Counties have called on Yoder to prevent immigrant children seeking asylum in the U.S. with their families from being separated from their parents at the border. Yoder is chairman of the Homeland Security Appropriations Subcommittee.

With Hurricane Florence bearing down on the Carolina coasts there is now controversy over the transfer of $10 million from the Federal Emergency Management Agency (FEMA) to U.S. Immigration and Customs Enforcement. One of the people responsible for this transfer is Kansas 3rd District Rep. Kevin Yoder, who chairs the House subcommittee that oversees the Department of Homeland Security budget.