Kansas is setting aspirations for much higher math and reading competency among the class of 2030 — today’s kindergartners — in a long-term accountability plan for its public schools.

Kansas officials submitted the accountability blueprint Tuesday to the U.S. Department of Education. It does not include language promoting controversial school choice concepts that Gov. Sam Brownback’s office advocated for, according to staff at the state education department.

Members of the Kansas State Board of Education expressed support for the plan Tuesday but questioned agency officials about the targets, which call for three out of four students to be proficient in math and reading by the year 2030.

“Is it realistic?” chairman Jim Porter, a Fredonia Republican, wondered.

“Seventy-five percent is going to be tough, but it’s what we need,” replied Beth Fultz, an official with the state education department.

Read the long-term plan submitted by the Kansas State Department of Education.

Education officials picked that number based on the state board’s goal of preparing children for college and careers. The board’s vision leans on Georgetown University research suggesting upwards of 70 percent of the workforce will need postsecondary credentials in the near future.

Just one in three Kansas students currently scores at a proficient level on state math tests, and about 40 percent do so on reading and language arts tests.

“Proficient” in this context means a score of 3 or 4 — the top two scores on the state’s tests. Children take the assessments in third through eighth grades and once in high school. A score of 3 or 4 is designed to indicate mastery of skills and knowledge at each grade level that prepare the child for college.

Proficiency rates are even lower among students with disabilities and groups that are historically socioeconomically disadvantaged. Just 13 percent of black students score at a proficient level on Kansas math tests, for example.

Schools are expected under the plan to hit the target of 75 percent for their overall student bodies, but also specifically for students in minority groups and for children with disabilities, from low-income families or learning English as a second language.

The Kansas accountability plan also aims for a 95 percent high school graduation rate in 2030, compared to the current 86 percent.

‘The power of school choice’

Brownback signed off on the plan Monday. His office did not answer questions submitted Tuesday about whether he had pushed the education department to insert provisions into its plan about charter schools, vouchers or other school choice programs — a divisive topic among education advocates — and whether he had worked with a third-party organization on the matter.

Spokeswoman Rachel Whitten provided this comment instead: “Governor Brownback supports the State Board of Education’s efforts to improve educational outcomes for all Kansas students, and remains a strong supporter of innovation at the local level.”

During a presentation to the state board, education department staff said Brownback’s office had worked with an organization to review the plan and provide feedback to state education officials.

A copy of the organization’s input, obtained through an open records request, urges Kansas education officials to “consider harnessing the power of school choice” by, for example, increasing the prevalence of charter schools, of which there are currently only 10 in Kansas.

Read the ExcelinEd recommendations on the Kansas plan.

The academic benefits of charter schools versus traditional public schools are a subject of debate among education researchers.

Though school choice provisions didn’t make the cut for Kansas’ blueprint, education department staff told the state board they were still in conversations with Brownback’s office on those concepts.

“Because we want to work with the governor’s office, we’ll keep working and see if there’s any way we can assist them,” Tate Toedman said.

Kansas’ submission of an accountability plan to the U.S. Department of Education is required to show how the state will comply with the Every Student Succeeds Act, also known as ESSA.

ESSA is the 2015 federal statutory overhaul that replaced No Child Left Behind, a 2001 law that set a target of closing achievement gaps and reaching 100 percent math and reading proficiency by 2014.

State board vice chairwoman Kathy Busch, a Wichita Republican, suggested Kansas make clear that its schools will be measured in part based on the progress of their students, not just on whether they hit the 75 percent proficiency target. 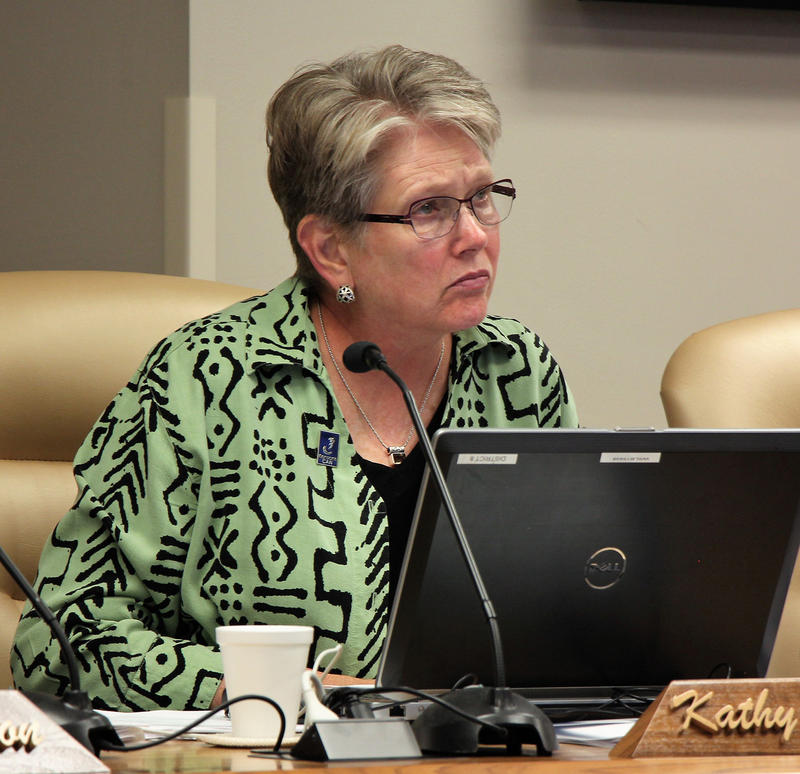 Setting an across-the-board 75 percent target “just screams of No Child Left Behind to me,” she said.

“Having lived with the 100 percent rule, which was …” she said, but paused and cut off her sentence. “That’s all I’ll say."

No Child Left Behind became highly unpopular over the years. Many educators thought it was unfairly onerous, particularly to schools serving higher numbers of high-poverty and minority children, because the goal was unrealistic.

Deputy education commissioner Brad Neuenswander said state education officials would consider the growth that each school shows, rather than basing measures entirely on whether they hit or miss their targets.

Education officials also said the new accountability system would be “more helpful” and less punitive than No Child Left Behind by providing technical assistance to help struggling schools improve.

They predicted federal education officials would provide feedback on Kansas’ plan by December.

The Kansas Association of School Boards, an advocacy group that represents most of the state’s 286 boards of education, submitted feedback to state education officials praising the ESSA plan — with a caveat.

The association called the 2030 targets “a moral imperative” meant to help ensure financial security for Kansans through rigorous education.

“However, if Kansas is serious about reaching these unprecedented goals, it will require commitments far beyond the scope of this plan,” the group wrote. “The State Board will need to continue and significantly strengthen its advocacy with state and federal lawmakers for the additional finances required to accomplish such ambitious outcomes.”

Dozens of school districts are locked in an ongoing, seven-year long legal battle with the state over school funding levels. The districts accuse the state of underfunding education to the point that it violates Kansas’ obligations under the state constitution.

Celia Llopis-Jepsen is a reporter for the Kansas News Service, a collaboration of KCUR, Kansas Public Radio and KMUW covering health, education and politics. You can reach her on Twitter @Celia_LJ. Kansas News Service stories and photos may be republished at no cost with proper attribution and a link back to kcur.org.

Those empty jobs worry educators because they force schools into workarounds, such as larger class sizes or long-term substitutes. They can also reduce class offerings and lessen support for special-education students.

Janet Waugh represents Kansas City, Kansas on the State Board of Education. She calls the situation heart breaking.

Tensions over the condition of public education in Oklahoma continue to grow more strained.

As The Oklahoman reports, the Oklahoma City Public School System is considering suing the state Legislature. Leaders of the largest school district in the state say the Legislature has consistently failed in its constitutional and moral responsibilities to the children of Oklahoma.

Many Texas Panhandle students will return to school this week.

As The Amarillo Globe-News reports, most school districts in the Panhandle have chosen to return from summer earlier this year, preceding by a week and a half the state-mandated start date of Aug. 28. Canyon ISD and four of the five Amarillo school districts will begin on Wednesday.

As Enrollment Drops In Rural Oklahoma School Districts, The Funding Goes With It

Rural school enrollment is on the decline in Oklahoma—and funding to rural communities is going down with it.

As The Tulsa World reports, small towns like the ones in Western Oklahoma receive a set amount of state funding per pupil. That means, when fewer students enroll, the schools and communities suffer.

One Oklahoma teacher has now turned to panhandling to pay for necessary items for her classroom.

Oklahoma teachers will be returning to work in a few weeks, and that means they’ll have to get their classrooms ready. But, in cash-strapped Oklahoma, this can be an even bigger challenge than in other states.

A proposed Kansas school finance formula drew more fire this week, in the closing day of hearings on the plan.

Like many other professions, rural Kansas is falling short on teachers, but so are some urban areas in the state. A new program at Kansas State University aims to change all that.

As KCUR reports, K-State has developed a one-year, online program for those with undergraduate degrees to take to get a masters’ degree in elementary teaching.

Rural schools in the Sunflower State received some good news this week. Over the next two years, every Kansas public school could be equipped with high-speed internet, reports The Wichita Eagle.

This week Governor Sam Brownback announced that about 300 schools in Kansas, most of them in rural areas, will be equipped with fiber-optic connections to provide high-speed Internet access to students.