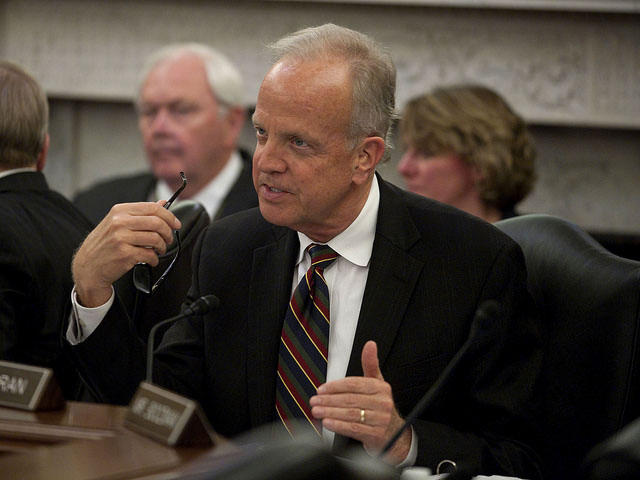 UPDATE: In Washington, D.C. Tuesday, U.S. Sen. Jerry Moran issued a statement saying that he would support President Donald Trump's efforts to repeal the Affordable Care Act without a replacement.  That news quickly turned the mood of a demonstration at Moran's office in Olathe where opponents of the now failed replacement bill had been thanking the senator from Kansas for standing firm against it.

In late June, the Republican senator from Kansas, to the surprise of many, announced his opposition to an initial draft of the bill. But, as of the close of business Monday, Moran had not taken a position on the revised version released Thursday by GOP leaders.

That changed Monday night when he and Sen. Mike Lee, a fellow Republican from Utah, announced their opposition to the measure on Twitter.

My colleague @SenMikeLee and I will not support the MTP to this version of BCRA. #HealthcareBill— Jerry Moran (@JerryMoran) July 18, 2017

My colleague @JerryMoran and I will not support the MTP to this version of BCRA #HealthcareBill— Mike Lee (@SenMikeLee) July 18, 2017

In a statement also issued on social media, Moran said while he remained committed to repealing Obamacare, Congress needs to make a “fresh start” on writing a replacement bill and do it in an “open legislative process.”

“This closed-door process has yielded the BCRA (Better Care Reconciliation Act), which fails to repeal the Affordable Care Act or address healthcare’s rising costs,” Moran said. “For the same reasons I could not support the previous version of this bill, I cannot support this one.”

“We should not put our stamp of approval on bad policy,” he said.

At town hall meetings over Congress’ July 4 break, Moran said he was concerned the bill wouldn’t lower overall consumer costs or provide adequate protection for those with pre-existing conditions. He also expressed concerns that deep cuts in Medicaid over the next decade could threaten the survival of already struggling rural hospitals and nursing homes.

“I am a product of rural Kansas,” Moran said July 6 to an overflow crowd in Palco, a small town north of Hays. “I understand the value of a hospital in your community, of a physician in your town, of a pharmacy on Main Street.”

Moran’s renewed stand against the bill drew immediate praise Monday from Kansas groups that have spent the past several weeks urging him to maintain his opposition to it.

“Kansans spoke out and Jerry Moran listened,” Hilary Gee, a Kansas lobbyist for the American Cancer Society’s Cancer Action Network, tweeted in reaction to the news.

"Regretfully, it is now apparent that the effort to repeal and immediately replace the failure of Obamacare will not be successful," McConnell said.

The Senate may now take up a straight repeal bill, McConnell said. One that repeals the ACA immediately but gives Congress two years to fashion a replacement.

Jim McLean is managing director of the Kansas News Service, a collaboration of KCUR, Kansas Public Radio and KMUW covering health, education and politics. You can reach him on Twitter @jmcleanks.

Kansas News Service stories and photos may be republished at no cost with proper attribution and a link back to kcur.org.

One of the senators who stuck the knife into the Senate's latest plan to replace the Affordable Care Act was one Republicans hadn't been worried about.

On Monday night, Kansas Sen. Jerry Moran and Sen. Mike Lee, a fellow Republican from Utah, announced their opposition to the measure on Twitter, effectively killing Better Care Reconciliation Act (BCRA), which had been the GOP plan to replace the ACA.

The number of Native Americans without health insurance would increase sharply if Republicans in Congress succeed in repealing and replacing the Affordable Care Act, according to a new report.

U.S. Sen. Jerry Moran is opposed to a bill crafted in secret by Republican leaders to repeal and replace the Affordable Care Act.
But speaking to an overflow crowd at a town hall meeting Thursday in northwest Kansas, Moran said he is open to supporting a revised version if GOP leaders can address his concerns.
“I would be anxious to see if that bill can get to the point in which I think it’s beneficial for Kansas,” Moran said.

U.S. Sen. Jerry Moran will have his first town hall meeting Thursday since announcing his opposition to the Republican Obamacare replacement bill.

Opponents of the bill have been working to generate a big crowd for the meeting, scheduled for 11 a.m. at the McKenna Youth and Activity Center in Palco, a small town just north of Hays in northwest Kansas.