Kansas Students Improving Where It Matters Most: Graduation

Kansas' high school graduation rate continued to trend upward with the class of 2018 as schools put a growing emphasis on preventing students from dropping out.

Of the students who started at both public and private high schools in 2014, 87.5 percent graduated within four years, an increase from the 86.9 percent rate of the previous freshman class, according to newly published state data. 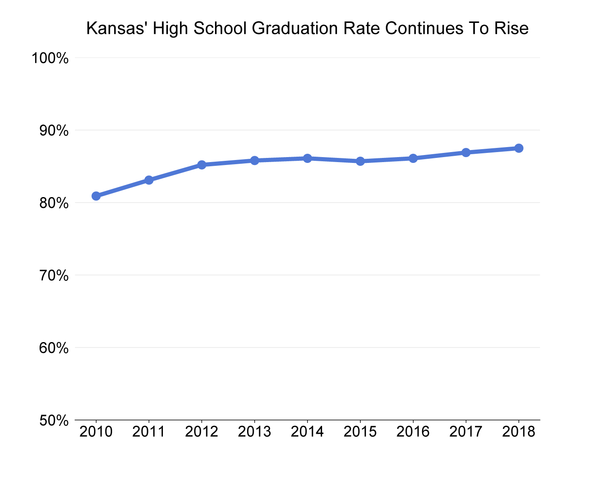 A diploma is paramount.

Kansas has prioritized graduation as a key measure of student achievement while deemphasizing test scores in recent years. Along with tests being the boogeyman of classrooms — accused of stealing teaching time and raising student anxiety — educators say tests are only a momentary snapshot.

Graduation, however, represents the culmination of more than a decade of schoolwork. And it’s a real predictor of success after school, with a diploma all but required in today’s economy.

"The graduation rate is one of the most important things to look at because it really is the ticket to most jobs and further education," said Mark Tallman, the associate director of the Kansas Association of School Boards.

Kansas’ overall graduation rate has been improving since at least 2010 when the state began accounting for transfer students in the data.

Achievement gaps have also narrowed. Graduation rates for black and Hispanic students, and students qualifying for free lunch improved faster than the overall rate. With the class of 2018, the graduation rate for black males jumped to 75.3 percent, up from 72.8 percent for the previous class.

But the chasms remains wide. Students qualifying for free lunch still have a graduation rate about 10 points below the Kansas average.

The Kansas State Board of Education in 2015 unveiled a new blueprint called Kansans Can. In it, Education Commissioner Randy Watson pushed schools to increase graduation rates and focus on kindergarten readiness.

The state has since adopted new assessments to measure the skills and emotional development of students entering kindergarten and identify kids needing extra support. The early help is meant to prevent students from straying from the path to graduation at the start of their education.

"Those are the biggest things we're going to find that's going to help reduce these large gaps," said G.A. Buie, the executive director of the United School Administrators of Kansas.

But even if Kansas is better able to prepare students for more than a decade of learning, it will take an equally long time for that to show up in the high school graduation rate.

Meanwhile the district’s high school graduation rate has been practically stagnant. Wichita recorded the smallest of increases in 2018: .1 percentage point. Still, Gil Alvarez, assistant superintendent of secondary schools, says the slight improvement of the last two years is worth celebrating.

"You turn a big ship it's going to take a little while to get it around," Alvarez said.

Wichita is recovering from three straight years of plummeting graduation rates between 2014 and 2016. District leaders in part blamed those declines on budget cuts that prompted them to ax alternative education programs and close Metro-Meridian Alternative High School two years ago.

The state Legislature granted millions in additional school funding in 2017 and 2018 in response to the Gannon v. Kansas lawsuit — a lawsuit that’s been active since 2010. Wichita gives some credit to the influx of state dollars for its graduation rate picking up again.

The state department of education wants Kansas to achieve a 95 percent graduation rate by 2026. In his final state of the state speech last January, then-Governor Sam Brownback upped the ante, saying the state should hit that ambitious target by 2023.

"When you start getting into that elite level, the 90s, it does get harder to get those other percentiles to jump because there's less students to work with," said Branden Johnson, assistant director of graduation at the Kansas State Department of Education.

Education advocates say it will take additional state funding. They argue that without the supports and interventions the extra dollars would make possible the remaining students at risk of dropping out will be impossible to reach.

"I think it's a realistic goal if the resources are there," said Marcus Baltzell of the Kansas National Education Association, the state’s largest teacher’s union, "but they're just not right now."

Stephan Bisaha, based at KMUW in Wichita, is a reporter for the Kansas News Service, a statewide collaboration between KMUW, Kansas Public Radio, KCUR and High Plains Public Radio covering health, education and politics. Follow him on Twitter @SteveBisaha.