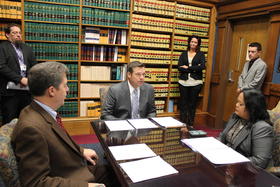 A western Kansas man accused of voting in two states has agreed to a plea bargain, saying he “simply made a mistake.”

In return for the plea, Kobach’s office will drop three felony charges of election perjury and one misdemeanor count of an unlawful advanced voting, Fairbanks says. Wilson will pay a $6,000 fine, Fairbanks says.

In a letter to the court, Wilson says he pleaded guilty because he violated the letter of the law and takes responsibility. But he didn’t intend to do it, he wrote.

“It turns out I simply made a mistake,” Wilson wrote. “I remain steadfast in knowing there was no intent, desire or conspiracy to circumvent the ‘one man-one vote’ integrity of our system of free elections and political representation.”

This is the seventh voter fraud case Kobach has won since he was granted prosecutorial powers from the Kansas Legislature in 2015. Wilson is one of five older Republican men who have been convicted, along with one 77-year-old Democrat and one 65-year-old Republican woman.

All of the cases were found in the Interstate Crosscheck Program, a huge voter registration database that includes 30 states and is operated by Kobach’s office.

The charges were about Wilson’s signing the rolls at the ballot box – which all voters are asked to do. That’s an affidavit in which the voter swears he or she hasn’t done this in any other states, Fairbanks said.

“The problem is, it’s really not about voting twice. It’s about signing the paper,” Fairbanks said. “That’s the frustrating part for Lincoln.”

Kobach’s office did not return an email seeking comment.

Peggy Lowe is KCUR's investigations editor. She can be reached on Twitter @peggyllowe.