If you’ve spent your life in the city, maybe you’ve never experienced the smell near a dairy farm, cattle feedlot or a newly fertilized field.

“If you lived up in Amarillo, where I’m from, everybody is real familiar with [it],” says the agricultural law specialist for Texas A&M AgriLife Extension.

It's manure, a constant part of raising animals.

Manure also emits chemicals like hydrogen sulfide and ammonia, and under federal law, most businesses are required to report those toxic emissions when they reach a certain level. But for years, most farms, ranches and other livestock facilities have been exempt from the requirement.

“The District of Colombia Court of Appeals issued a decision that essentially said that the EPA did not have the authority to make that exemption,” Lashmet says. 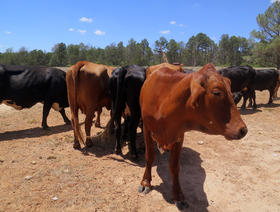 The ruling was the result of a lawsuit from environmental and public health groups. They saw it as a big victory for the environment.

“Hydrogen sulfide can cause long-term chronic health effects in people that live in rural communities. Ammonia on the other hand can cause lots of acute effects,” says Jonathan Smith, a lawyer with the group Earthjustice.

Some also saw the ruling as a first step in regulating other emissions from farms, like the potent greenhouse gas methane.

The mandate to report emissions did not go over well among most farmers and ranchers, however.

“I think the biggest concern for people was just, ‘How in the world are we going to do this?’” Lashmet says.

She says the EPA was unclear about which farms would need to track emissions and how they should measure them. People also feared added regulation.

Given the confusion, Lashmet decided to make the new rules a topic of a podcast she produces to educate farmers and ranchers.

“It was relevant for about 72 hours,” she laughs.

That’s because just weeks before the new reporting rules were to take effect, lawmakers rolled them back in a rider attached to the recent budget vote.

“It’s very concerning,” Smith says, because "this is just kind of the simple first step to addressing a significant problem.”

Still, he doesn’t think the story’s over. He says eventually new legislation or lawsuits will force emissions reporting again.

“I think a lot's going on out there that animal ag needs to pay attention to,” she says. “Laws are only as permanent as Congress.”

Correction: An earlier version of this story said the District of Colombia Court of Appeals' decision came down in May last year, not April.

The world’s largest meatpacking company, JBS, shrunk last week due to selling off its massive cattle feedlot operation — the most recent asset that the Brazil-based company has sold after becoming mired in multiple corruption scandals.

‘What Are We Gonna Do With Them?’ Livestock Hauling Industry Concerned About New Federal Rules

A new, widely debated federal mandate requires truckers to electronically track the number of hours they’re on the road — a rule that’s meant to make highways safer. But there’s a big difference between hauling a load of TVs and a load of cattle destined for meatpacking plants.

A few years ago, Kansas City restaurateur Anton Kotar surveyed the local and national restaurant scenes and concluded his town’s reputation as a steakhouse paradise had slipped.

The problem, he says, is the way conventional beef is raised – bulked up with grain on feedlots, making it cheap and plentiful and changing what Americans expect to taste.

The U.S. Department of Agriculture faces a lawsuit that argues the federal agency must bring back a proposed rule that defined abusive practices by meatpacking companies.

New Study Looks At An America Without Meat

A new scientific study asks the question: What if everyone in America suddenly went vegan and stopped eating meat, eggs, milk, and fish.

As the Highland Plains Journal reports, the authors say that in that extreme scenario – the nation’s food supply would increase by 23 percent and greenhouse gas emissions would drop by 2.6 percent. However, to ensure people are getting their vitamins and minerals, we would need to grow different crops and take supplements to meet recommended dietary guidelines.