Kansas is on its way to becoming a majority-minority state, with white residents expected to make up less than half of the population by 2066.

A new report from the Kansas Health Institute shows that the state is quickly becoming older, more urban and more diverse.

"The urban areas of our state have seen some increase in the white population," says Steve Coen, head of the Kansas Health Foundation, which commissioned the report. "Every county in the state has seen an increase in diverse populations, people of color. Every single county."

Kansas' overall population was about 2.9 million in 2016; it's expected to grow to 3.2 million by 2036, and 3.6 million by 2066. The growth is driven entirely by minority groups: The Hispanic population in Kansas is expected to more than double in the next 20 years to about 20 percent. Meanwhile, the white population is projected to shrink steadily, following a trend that goes back to 2000.

“If we did not have this growth in minority population in the state of Kansas," Coen says, "we would not have had any growth in Kansas whatsoever in the last 16 years." 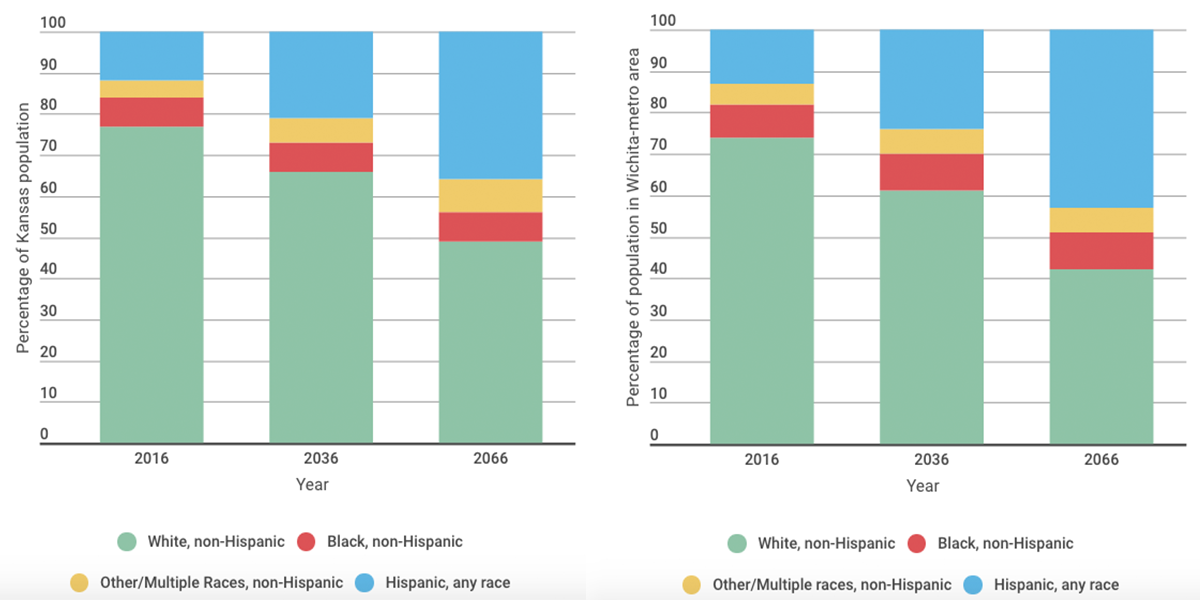 The Wichita metro area mirrors the shift happening at the state level, with minority populations -- Hispanics, African-Americans, Asian-Americans and Native Americans -- expected to make up more than half of the total population by 2066, if not sooner.

"I think Wichita's going to change much quicker," Coen says.

He says in many ways, the change is a good thing for Kansas, not just culturally, but also economically: The growth in minority populations has kept the state's unemployment rate stable, allowing for a larger pool of labor for businesses.

"So let's embrace this change, and figure out how we can use this future workforce that we have that will probably stay in our community."

He says the changing demographic makeup will have implications, like on education. Black and Hispanic students in Kansas graduate high school at lower rates than their white peers; and while dropout rates have fallen across the board nationally, they're highest among Hispanic students.

"I think with this change, of us becoming a majority-minority state, education becomes an even bigger factor," Coen says. "We have to talk about how do we address that issue long-term."

Kansas Has Some Of The Nation's Highest Education Standards, But Students Struggle To Keep Up

Kansas has some of the highest education achievement standards in the country, but students are struggling to reach that high bar.

The new report from the National Center For Education Statistics standardized state proficiency assessments for math and reading in 2015. For eighth grade, Kansas had the highest benchmark for proficiency in both reading and math out of the states evaluated.

Finding health and human services help in Kansas is now as easy as sending a text. The United Way of the Plains launched a new texting option for its 211 information helpline.

Here is how it works: all you need to do is send a text to 898211 with your zip code. A call center operator will answer the text and get more details about the situation.

A group of Kansans hoping to establish a new centrist political party in time to field candidates for the upcoming general election failed to get enough signatures to make that happen.

Even so, they say, they got enough support to convince them that they could be on the 2020 ballot.

“We’re in it for the long game,” said Scott Morgan of Lawrence.

More than 1,300 phone calls between public defenders and inmates awaiting trial at the Leavenworth detention facility were improperly recorded over a two-year period, according to newly disclosed information in a civil lawsuit.

Six weeks of protests by the Poor People’s Campaign nationwide and in Topeka aim to raise awareness of social and economic inequalities.

Translating those demonstrations into changes in state policy, says at least one analyst, will likely demand more sustained efforts.