NAFTA Took US Beef International, But Some Ranchers Say It Went Too Far

The U.S., Canada and Mexico wrapped up the latest round of negotiations earlier this month over NAFTA, the North American Free Trade Agreement.

President Donald Trump has threatened to terminate the trade pact, which he continues to call a bad deal for the U.S. But NAFTA has helped grow the beef industry beyond the U.S. borders, so while some worry about the Trump administration’s wavering commitment to NAFTA, others want more protections.

“When you process one of these animals, it doesn't go to the same place. You have pieces that go everywhere,” according to Craig Uden, who co-owns Darr Feedlot, a cattle-feeding operation near Cozad, Nebraska.

Uden says meat companies sell cuts of beef wherever they bring the best prices: Steaks and hamburger do well in the U.S.; other cuts sell better overseas.

“The chuck roll could be destined for Asia, and the tongues maybe to go Japan and the oxtail maybe goes to Europe,” Uden said.

NAFTA is part of how this border-blurring production system works. Cattle from Mexico and Canada are imported to feedlots and packing plants in the U.S., tariff-free. From there, they become part of the beef supply parceled out on the export market. 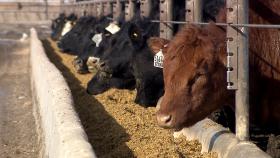 Uden calls it a “rebalancing.” When consumers have more access to the meat they prefer, he says it boosts demand across the industry.

“If they want high quality in Canada, we've got plenty of high-quality extra beef that we can ship to Canada,” he said. When Mexico buys lower quality products, “it adds value to the bottom line of the beef produced in the United States,” he added.

But if NAFTA unravels, Uden fears the U.S. would be saddled with more beef than Americans could eat, causing an oversupply that would be felt "to the grain markets and the hay markets and the ethanol production.

“So it’s never been a good idea when you’re a state like Nebraska that relies on agriculture as your No. 1 economic driver," he said.

There are some in the cattle business who believe NAFTA has done more harm than good. On a ranch near Neligh, Nebraska, David Wright and his family raise calves that, once grown, are destined for feedlots.

Wright agrees with Trump that the current version of NAFTA doesn’t work, and Wright said he supports efforts to reform it. Echoing the recent debates over steel and solar panels, he says cheap cattle from Canada and Mexico undercut his business.

“The cost of living or production in other countries is different than it is here,” Wright said. “As long as we're one of the highest economies in the world, I don't see a lot of advantage in us trading for something that we already produce.”

Last year, the U.S. exported nearly $2 billion of beef to Canada and Mexico, but also imported millions of cattle from the two countries that Wright says compete for space at feedlots.

“Someone tell me how that's good for the producer here, who's paying the real estate taxes to keep the school open, doing business trying to keep the town open, as opposed to the guy in Canada who's really not,” Wright said.

There are fewer farms raising cattle since NAFTA went into effect in the mid-1990s, according to the U.S. Department of Agriculture, and the number of large cattle feedlots has dropped more than 50 percent.

Wright says if NAFTA remains unchanged, that trend will continue.

Uden doesn’t blame NAFTA for the concentration in the beef industry, and credits it for the cost of labor and keeping up with environmental rules. And, he said, Canada recently started buying large numbers of cattle from the U.S.

Wright has been encouraged by economic growth and new jobs created so far under Trump. He says putting protections in NAFTA for American workers would reinforce that — and help them buy more steak dinners.

“If we're sending jobs over to other countries, then what are our citizens doing to earn a living?” Wright said. “Because if they don't have revenue to spend on the product that I'm trying to sell, then I guess I don't have a product to sell, you know?”