Groups working with immigrant families in Texas say a Trump administration policy to separate families at the Mexico border is creating a strain on their resources and they don't know how long it will continue.

“It’s just been a shock to the system,” says Sarah Valdes, supervising attorney for the children’s program at RAICES, which provides legal help to immigrants here.

Valdes says the scale of the separations is unprecedented and that her group is "strategizing" how to tackle as many cases as it can with its existing caseload.

There’s a lot RAICES doesn't know about the policy, though, like whether or when these families will be reunited. Valdes says that makes her job particularly tough.

“When people look to me as an attorney to say – ‘What do you think I should do?’ – people want definite answers,” she says. “And I can’t give definite answers right now.”

This uncertainty has also been a challenge for groups that contract with the U.S. Department of Health and Human Services to provide services for these children. 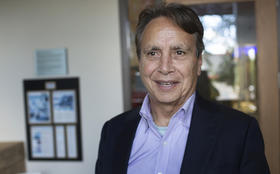 Austin-based Southwest Key Programs has been running shelters for the government for the past 20 years. Its founder and president, Juan Sanchez, says he also doesn't know what the future holds for these families.

“We don’t know yet because we don’t know where this is going,” he says. “This is a recent policy. It hasn’t all been worked out.”

Until recently, Southwest Key shelters served mainly children who had come across the border without a parent or guardian. Sanchez says they tend to be older.

Sanchez says his programs are designed with the expectation that children will be reunited with their families and that Southwest Key assumes that's still the case under the new "zero tolerance" policy.

“What we are doing is maintaining a relationship between the child and the family member – wherever they may be,” he says. “And making sure they understand that we have the child, and as soon as they are able to take the child back, that’s what we would like to do is connect them again.”

Sanchez says he has no idea about a possible timeline for family reunification. In the meantime, he says, he’s trying to hire more child care workers, clinicians and administrative staff to meet these children's needs.

The children separated from their parents make up about 10 percent of Southwest Key's shelter population right now, Sanchez says, and the group is running out of space.

“We are at a maximum right now, pretty close to it,” he says. “We got about 230 additional beds. But we are making room for some additional beds. When we get to 6,000 we're going to be maxed out. And there's a lot of ... discussions now about where are these kids going to go.”

Valdes says she feels personally hurt by the “animosity” the U.S. is showing people at the border –many of whom are fleeing violence and poverty in their home countries.

“I don’t know how as a country we can continue to treat people like this,” she says. “And I think as a legal community – as an advocacy community – we're not going to stand for this policy as it is, and we're going to fight for fairness.”

The Trump administration’s policy of separating parents and children who cross the border without legal permission has become a divisive issue across the United States and in Congress.

The policy spurred U.S. Rep. Kevin Yoder, R-Kansas, to demand Monday that Attorney General Jeff Sessions "take immediate action to end the practice" that's divided nearly 2,000 families since April. There's also a Senate bill, known as the Keep Families Together Act, that would ban the separation tactic and has only Democratic backing.

Laura Bush, the former first lady of the U.S. and of Texas, called the Trump administration's zero tolerance policy of separating immigrant children from their parents "cruel" in an op-ed published in the Washington Post Sunday evening.

"It breaks my heart," she wrote.

Homeland Security Secretary Kirstjen Nielsen is continuing to defend the Trump administration's controversial "zero tolerance" policy that results in separating children from their parents who enter the U.S. illegally.

Nielsen appeared at the White House press briefing on Monday, falsely blaming Democrats for the current crisis and arguing that the impetus is on Congress to pass a law to close legal loopholes.

Immigration To Southwest Kansas Is Creating A New Accent

Southwest Kansas has a new accent due to the rapidly growing Latino population in the area.

New research from Kansas State University and its Kansas Speaks Project, which documents language shifts in Kansas, shows younger people in the region have started to take on the characteristics of Spanish speakers, even if they don’t speak Spanish themselves.

The Mexican American Legislative Caucus and the Texas Senate Hispanic Caucus are suing the Trump administration in hopes of blocking the addition of a citizenship question to the once-a-decade census of every person living in the United States.