High school students pack into front row seats at the University of Oklahoma stadium in Norman on a muggy Thursday evening, set to watch the city’s biggest rivalry: the Norman High School Tigers versus the Norman North Timberwolves.

Claire LaReau, a senior at Norman North, is decked out in a bright green bowtie and green face paint. LaReau said high school football games can be intense. She and her classmates still talk about an incident from two years ago.

“It was at an away game and this ref made a horrible call. Everyone just was screaming and yelling,” LaReau said.

“All of a sudden you just see this pickle flying. And it hits the ref in the head.”

The ref reportedly dismissed the entire student section with just a few minutes left in the game.

Tim Nugen, who has been an official in the Oklahoma City area for six years, said most refs have stories like this.

Nugen is one of about 350 people calling games in the metro.

He started officiating because he played football in high school and wanted to stay close to the sport.

“I try not to live in the past or anything, but I get a front row seat,” Nugen said. “I mean, I’m right there on the field. Nobody gets a better seat than I do.”

Nugen usually calls games with the same four guys and said for the most part, reffing is fun. He is the head linesman for his crew, which also includes an umpire, a line judge, a back judge and a referee.

“We like to cut up a lot. We like to do all kinds of, you know, fun stuff,” Nugen said.

“The referee on our crew is a pretty intense guy, so we always like to get under his skin a little bit by hiding his gear or taking his whistle away.” 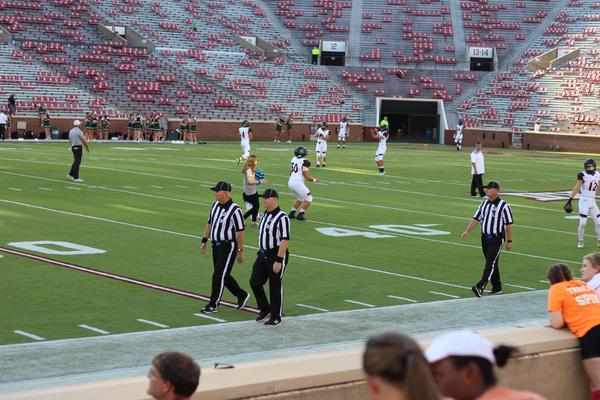 But it’s also a tough job.

Officials sometimes drive several hours to weeknight games and make a maximum of approximately $120 per contest.

According to Mano, bad behavior is the main reason people are wary of becoming referees.

“If you were in a courtroom and saw somebody...jump across the bench and slug the judge, you would be outraged,” Mano said. “That happens in the sports fields.”

The profession is having trouble attracting and retaining young people, per a survey of officials across the country.

“You have these people absolutely screaming at you,” Mano said. “[They’re] going crazy and then chasing you to your car. How long are you going to do that? Not long.”

To fix the shortage of officials, Mano argues sports leagues need to hold misbehaving coaches, parents and fans accountable. He said referees also benefit from a strong support system, like a mentoring program through a local ref association.

Adam Warmuth, a parent on the sidelines at the football game in Norman, said during tense games, it is tempting to blame officials.

“I get emotional,” Warmuth said. His son is a sophomore on the Norman High School team.

But he said he tries to keep his emotions in check and called refs “a necessary evil.”

“Just wait long enough and they’ll make a bad call for you the opposite way,” Warmuth said.

“Without them, you’re on an honor system. Good luck with that.”

As a community-supported news organization, KGOU relies on contributions from readers and listeners to fulfill its mission of public service to Oklahoma and beyond. Donate online, or by contacting our Membership department.
Copyright 2020 KGOU. To see more, visit KGOU.

Kicked Out After Kickoff: Fans Weigh In On Chiefs' New Tailgating Policy

The Kansas City Chiefs announced changes to their tailgating policy this week, and it's left some fans as hot as their grills.

Fans won't be able to tailgate in the parking lot after kickoff — they'll have to enter the stadium or leave, according to the Chiefs website.

In Oklahoma, As In Rest Of U.S., Youth Tackle Football Participation Rates Are Dropping

Like most of the country, Oklahoma is seeing a drop in youth tackle football participation. ESPN has reported that in the six years from 2009 to 2015, national participation dropped from around 4 million players down to about 3.2 million.