Poll: Rural Texans Wish There Were More Jobs, But They Are Happy Where They Are

Texans in the rural counties that make up the vast majority of the state’s geography are overwhelmingly happy with their quality of life, about their public schools and the quality of the natural environment around them, according to the 2018 Future of Rural Texas Poll released this week in connection with The Future of Rural Texas: A Texas Tribune Symposium held in College Station.

They share many problems with urban and suburban Texans, like transportation and access to mental health care, the poll found. And they have some problems, like “drugs and attendant crime” that are of higher concern in areas where opioid and methamphetamine are more prevalent.

The survey addressed a part of Texas than contains less than 15 percent of the state’s population, but 172 of its 254 counties. Their descriptions of what they like most about living where they are started with “rural” (33 percent) and included “neighbors/community” (17 percent), “peaceful/quiet” (13 percent) and “town size” (9 percent).

“The picture painted of rural communities in the mass media and in popular culture often is of an area in decline, with the people living there as the last holdouts,” said Joshua Blank, who with James Henson conducted the poll. “I don’t think that’s a fair portrait of the people living in rural areas in Texas. They have a real sense of place.”

“They like the pace,” Henson said. “They like the natural environment. They’re happy to live in a place that is not as crowded, not as fast, not as busy. They have a positive view of the place where they live, but also have things that they think would make it better.” 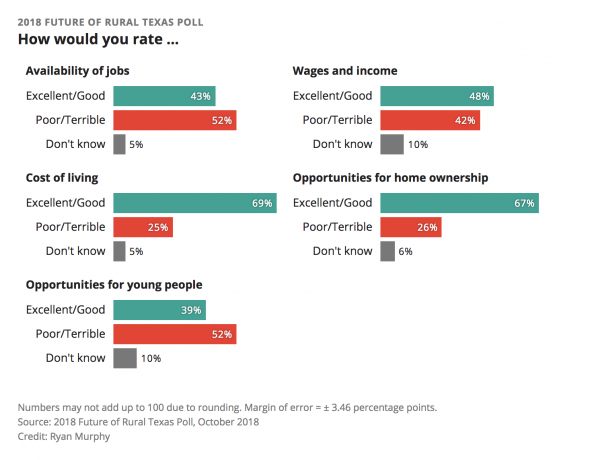 That said, slightly more than half (52 percent) said the availability of jobs is “poor” or “terrible” where they live, and 42 percent said the same about the wages and incomes that people earn. Most gave good marks to the cost of living “for necessities like housing, food and utilities,” and “opportunities for home ownership.” But more than half said “opportunities for young people entering the job market” are either poor or terrible.

“One thing that is probably the challenge that cuts through and highlights the urban-rural divide is access to quality jobs, and especially quality jobs for young people,” Blank said. “Amazon was not looking to put their second headquarters in any of these counties.”

Rural Texans are well pleased with their natural environment: 94 percent praised the quality of the air, 74 percent said the “quality of water in the rivers, lakes, or coastal areas” was excellent or good, and 83 percent offered high marks for “the availability of open spaces like public parks and other natural settings.”

They were positive, but less so, about infrastructure in their areas. On the high side, most said the cost and reliability of water service (81 percent) and electricity (79 percent) was excellent or good. Only 54 percent said the same about the quality of the roads; 64 percent about the availability of housing. Three out of five rural residents gave positive grades for “access to high-speed internet” and cell phone service.

More than half — 54 percent — offered no specific answer when asked what would most improve the overall quality of the places they live; 9 percent said they’d like to see better job opportunities and 5 percent pointed to roads and transportation.

They had interesting things to say about government: 75 percent agreed that “voting gives people like me some say about how government runs things.” At the same time, 54 percent said “the state government pays too little attention to the problems and challenges facing communities” like theirs.

The survey of 800 adult Texans in 172 counties was conducted October 8-17 by Austin-based Strategic Research Associates. The respondents talked with live interviewers over landline and cellular telephones, and the margin of error for the sample is +/- 3.46 percentage points.

This story was provided by the Texas Tribune.