You don't need bees and butterflies to grow corn and soybeans, but a majority of farmers do rely on pesticides, which don't discriminate between helpful and harmful insects.

The widespread use of pesticides is considered a major factor in the large-scale decline in bee populations in recent years. But it's unlikely farmers will give up or limit pesticide use, so instead, a team of researchers at the University of Nebraska-Lincoln is looking at designing agricultural landscapes with pollinator health in mind.

In other Plains and Midwestern states, researchers are having farmers plant prairie strips between fields to help combat water contamination from pesticides and fertilizer. UNL's five-year project wants to find out whether windbreaks, planted pollinator habitat, cover crops or a combination of those techniques can help limit pesticide drift.

Most commercial corn and soybean seeds have a pesticide coating that can become airborne and drift onto plants that bees rely on, such flowering trees and shrubs that grow along roadsides or in field corners.

Corn planting coincides with spring blooming, according to Judy Wu-Smart, a UNL assistant professor and extension specialist in pollinator health, drawing bees in at a time when they’re even more likely to get pesticide exposure.

There’s a key word in this fight for pollinator health: neonicotinoids. That’s a newer class of insecticides that differ from other pesticides because their toxic chemicals move throughout the entire plant and can collect in the soil, Wu-Smart says.

"So they're useful in agricultural production because they can protect plants from root damaging insects and pests, where spray applications may not reach them," she says. "But they're concerning for pollinators because bees that are foraging on plants that have been contaminated with neonicotinoids can be getting it directly through nectar and pollen."

Neonicotinoids can have a variety of effects on bees, which pollinate everything from apples to almonds to avocados. The insecticides can damage foraging, learning, memory, and cognitive functions "that really inhibit the colony from developing well," Wu-Smart says. They can also affect the queen's ability to lay eggs.

Researchers want to make these pollinator-friendly landscape designs appealing enough to farmers that they'll implement them, according to Gary Bentrup, a research landscape planner at the U.S. Department of Agriculture’s National Agroforestry Center in Lincoln, Nebraska.

"And as a general rule, I find that edge-of-field practices, kind of like what we're suggesting, are usually more palatable (to farmers) than changing an operation in the field," Bentrup says. 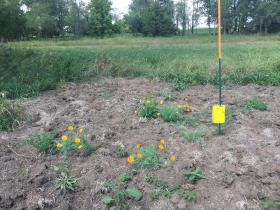 He's looking into the role of windbreaks — rows of trees planted along fields that can act as a shield between crops treated with neonicotinoids and pollinator-friendly plants on the other side.

"Evergreens are generally a good choice for that. Their fine leaves and branching structures are effective at trapping pesticide drift," Bentrup says, adding that the roots of the trees can also help filter pesticides in the soil.

But, increasingly, farmers are removing windbreaks to allow for more sprinkler irrigation, which is why Bentrup says it’s important to consider the multiple benefits of landscape design — including economic ones.

There's also a concerted effort by groups concerned about pollinator survival to establish more habitat, including around farms, Wu-Smart says.

That's why researchers hope to not just examine "what hurts and what harms pollinators but to look at the ecosystem as a whole," she says, and also "look at how we can find that balance between agricultural production and ecosystem functions and beneficial insect communities."

That could be good for farmers and bees.

There’s been an unexpected victim of President Trump’s decision to freeze all regulatory action within the Federal Government. The rusty-patched bumblebee has seen its numbers drop by 87 percent in the past couple of decades.

A federal judge’s ruling last week is being hailed as a victory for insecticide companies and lamented as a loss for beekeepers and nature advocates, reports Agri-Pulse.

An insecticide seed coating called neonicotinoid is believed to be partially responsible for the disappearance in many areas of the country of bees. Environmental groups had sued to have the substance outlawed.

Late spring is swarm season, the time of year when bees reproduce and find new places to build hives. Swarms of bees leave the nest, flying through the air, hovering on trees, fences and houses, searching for a new home.

With the disappearance of America’s bees, a California tradition is changing, reports Colorado Public Radio. Beekeepers flock to California every spring to watch billions of honeybees pollinate the state's almond trees. But now, many almond growers are switching to a new breed of tree that grows what are known as Independence almonds. These almond trees are special because they’re self-pollinating. That’s good news for farmers, who spend lots of money hiring bees to pollinate their crop.

Beekeepers on the High Plains might want to keep an eye on a story to the north. Two beekeepers in Minnesota have received compensation from the state’s department of agriculture after their hives were destroyed. The hives were severely damaged last spring by toxic pesticides that had drifted off a neighboring cornfield, reports the Star Tribune.