There’ve been five rounds of negotiations over the decades-old North American Free Trade Agreement in recent months, but little movement toward a re-imagining of the treaty with Canada and Mexico from which U.S. agriculture benefits greatly.

With President Donald Trump still threatening to pull the country out of NAFTA if his preferred updates aren’t made, senators in farm-intensive states increasingly are speaking out.

Republican Sen. Jerry Moran of Kansas wrote an op-ed for the industry publication AgriPulse in mid-November, and this week, 18 senators sent a letter to Commerce Secretary Wilbur Ross requesting an economic analysis of how any NAFTA change will affect crop and livestock producers.

Even Agriculture Secretary Sonny Perdue, who is in the midst of restructuring the U.S. Department of Agriculture, said earlier this month there are talks about “some mitigation efforts … about how we could protect our producers with that [farm] safety net based on prices that may respond negatively to any kind of NAFTA withdrawal.”

But Perdue, whom Politico also reported as saying that pulling out of NAFTA could have “tragic consequences” for U.S. farmers and ranchers, has struck a hopeful tone and believes the agreement will be renegotiated.

Of the $140.5 billion in U.S. agricultural exports in the 2017 fiscal year, almost 30 percent went to Mexico ($18.6 billion) and Canada ($20.4 billion). Since NAFTA started in 1994, exports of ag goods to Canada increased 44 percent, according to the Office of U.S. Trade Representative, though Canada still has tight regulations on products like milk, poultry and eggs. 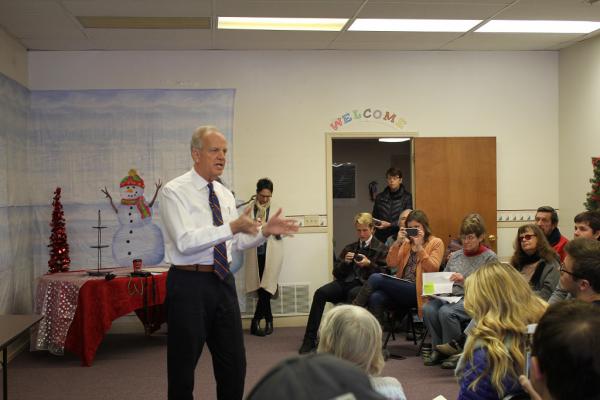 Moran spoke Wednesday to a crowd of about 100 people in the small northeastern Kansas community of Frankfort. He expressed his concern that the Trump administration’s may walk away from NAFTA.

“And their point is that Mexico and Canada don’t have any place else, particularly in agriculture, to buy agricultural products,” he said. “What about Brazil, what about Argentina, what about our competitors?"

What Moran worries about, which is reflected in the letter from the senators, is that pulling out of NAFTA entirely would be “harmful” to farmers in Kansas and around the country.

“There is not a Kansan who is not affected by the agricultural economy,” he said, “Corn and other agriculture commodities are piled for blocks along the rail tracks, and we are in a time when commodity prices are terribly low. The last thing that we need is less ability to sell.”

The U.S. stands to lose the most from a NAFTA renegotiation precisely because it is “highly reliant on market access to Mexico” — especially for corn exports, according to Laura Carlsen with the nonprofit Center for International Policy.

She has focused on things like U.S. trade policy impacts on Mexico for 15 years, and doesn’t believe the senators are misguided in their request.

“The letter itself I think is laudable, in that what it comes down to is asking for a review of what the impact of some of these things that are being negotiated would be on the crop and livestock sectors,” she said. “That review is absolute necessary, it’s necessary on both sides of the border.

And that’s where she splits with the senators’ concerns: “I think they (the senators) want to keep NAFTA open the way it is; they don’t want to see changes in this.”

The talks seem to be at an impasse, Carlsen said, in part because the Trump administration is “presenting even more proposals that cause conflict within the re-negotiations, like having to review it every five years, which would eliminate one of the things the free trade agreement is supposed to do, which is provide a certain amount of reliability for investors and people who put together major international trade deals.”

Sen. John Cornyn, a Texas Republican, said any deal must be something that can get through the Republican-majority Congress.

The next rounds of negotiations aren’t expected until early 2018. That’s a midterm election year in the U.S., during which, Carlsen said, Trump can tell voters, “I promised you we’d do this and we’re still in the process of negotiations.”

But it’s not so easy in Mexico, she said, because 2018 is a presidential election year, and “ they don’t want to have (NAFTA negotiations) open there.”

As the fifth round of NAFTA talks came to a close Tuesday in Mexico, the agriculture industry tried to convey the damage that would be done to the industry if a trade deal that is helping struggling sectors survive is terminated.

U.S. Senator Pat Roberts is calling for a public education campaign to help deflate claims by President Donald Trump and others that the North American Free Trade Agreement (NAFTA) was a disaster for the U.S.

As The Topeka Capital-Journal reports, the chair of the Senate’s agriculture committee said in a speech to the U.S. Chamber of Commerce that trade inspired by NAFTA had been a powerful economic force for Kansas agriculture and export markets in Canada and Mexico were essential for preventing further price deterioration in the crop and livestock markets.

Business leaders and members of Kansas’ congressional delegation are supportive of renegotiating the North American Free Trade Agreement, or NAFTA.

Speaking at a summit hosted by the Kansas Chamber of Commerce in Wichita Friday, District 4 Rep. Ron Estes said he wants to modernize NAFTA in a way that keeps the “good parts” of the trade agreement with Canada and Mexico.

Estes said Trump’s statements have begun to focus more on free and fair trade, instead of tearing up agreements.

Farms and ranches throughout the country won’t see their labor shortages solved by a renegotiation of the North American Free Trade Agreement (NAFTA).

In a call with reporters while visiting Mexico ahead of the trade talks, U.S. Agriculture Secretary Sonny Perdue said labor issues likely wouldn’t be addressed during formal negotiations among the United States, Mexico and Canada, set to begin August 16th.

Marshall: Kansas Has A Big Stake In NAFTA

It’s no surprise to Congressman Roger Marshall the concerns his constituents have during his trips back to Kansas center on the elevators full of grain that dot the Big First district.

“Trade and the farm bill, that is all I’ve heard about now when I do my town halls,” Marshall told Kansas Agland Thursday afternoon.

On Thursday, he met with U.S. Trade Representative Robert Lighthizer’s chief of staff, Jamieson Greer, to talk about some of the trade issues, including the modernization of the North American Free Trade Agreement.