A rural hospital administrator in southwest Kansas has taken on the role of go-between for Kansans and immigrants from war-ravaged countries on the other side of the world.

Benjamin Anderson, CEO of Kearny County Hospital, has been brokering dinner dates for families from both groups. Anderson, who has a history of international relations in his role at the hospital, was inspired to start the dinners during visits to the African Shop, which sells imported tea he can’t find elsewhere in Garden City.

The African Shop is owned by Adan Keynan, a Somali refugee who settled in Garden City about 10 years ago, around the same time Anderson moved to Lakin. The shop functions as a community center for immigrants, primarily from Somalia, who’ve come to southwest Kansas to work in the meatpacking industry. During one of his frequent visits over the last four years or so, Anderson and Keynan exchanged phone numbers. 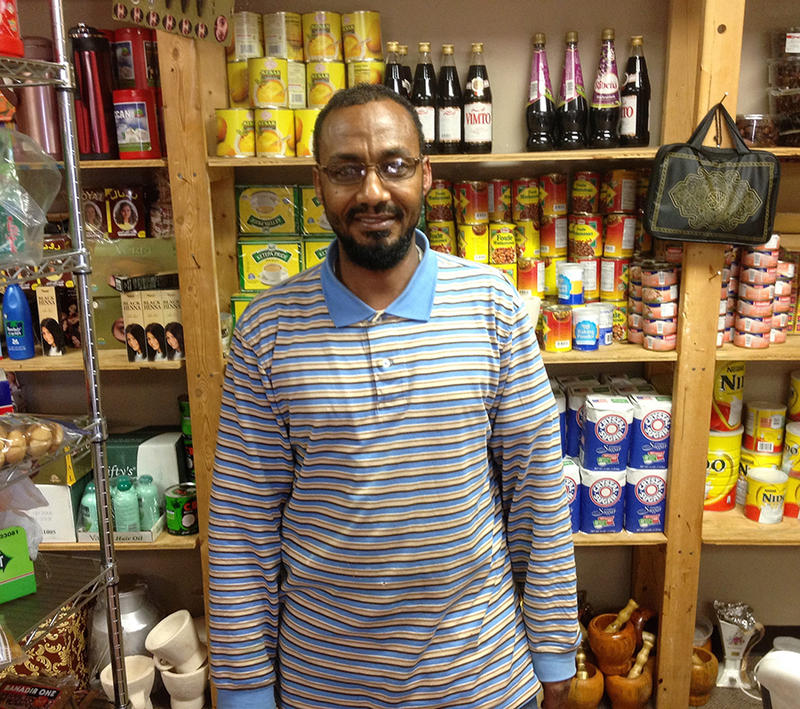 One night in the spring of 2016, Keynan had his niece call Anderson to ask him to come to his home immediately — even though it was 10:30 at night. Anderson got out of his pajamas, put on a pair of jeans, picked up a physician friend of his and went to the Somalis’ home in Garden City.

They were greeted with an elaborate feast. The Somali family members used the dinner as an opportunity to ask questions they and some of their friends had: What would it take to open a restaurant? How could they learn English while working double shifts at the packing plant? Who might be willing to help them get a driver’s license?

At the end of the conversation, Anderson recalls asking Keynan, “How often do you invite random white people over to your house at midnight for a feast like this?” The Somali man replied that a white person had never visited his home — and that he had never been in a white person’s home in the 10 years he had lived in Garden City.

Impressed by the Somali shop owner’s invitation to his home, Anderson took it as a challenge to reciprocate.

“I left thinking, ‘Good grief, if we can have people living in our community for 10 years that have never been in the home of a local person, how isolating that must be,’” says Anderson, who had similar feelings after moving to the area from California. “And out of that, this project called ‘Guess Who’s Coming to Dinner’ emerged.”

The name is an allusion to the 1967 film about a controversial interracial marriage and a family coming to accept it.

Anderson drafted interns from Baylor University who were spending this summer at Kearny County Hospital to help with the project. While they built relationships by volunteering at a refugee health clinic, attending cultural events and spending time at the African Shop, the Baylor students recruited refugee families to take part.

And the students worked with families from Garden City, Lakin and Satanta to spread the word about the need to build bridges among cultures.

Though Kansas pulled out of the federal refugee resettlement program last year, increasing numbers of immigrants from war-torn countries in Africa and southeast Asia have moved to southwest Kansas over the past decade, many drawn by the booming meatpacking industry.

Garden City has tried to capitalize on ethnic diversity and welcome these immigrants. But that harmony was shaken last fall when three southwest Kansas men were arrested by federal authorities on charges that they planned a terrorist attack on an apartment complex populated largely by Somali refugees. Calling themselves the Crusaders, the anti-Muslim white supremacists allegedly planned to set off bombs outside the apartments and shoot any survivors who emerged.

The dinner exchange program was in the works months before the plotted attack was revealed, but the case gave the project new urgency.

That’s how Kody Nelson, his wife, Kristie, and their three young children ended up eating steak, catfish, rice and vegetables with Ahmed Said Musa at the home of his sister, Fadumo Musa, and her 2½-year-old son, Abdi.

Nelson is also new to Kansas. Just four months before the dinner program, he moved with his family from rural Idaho to manage the business office at Kearny County Hospital. 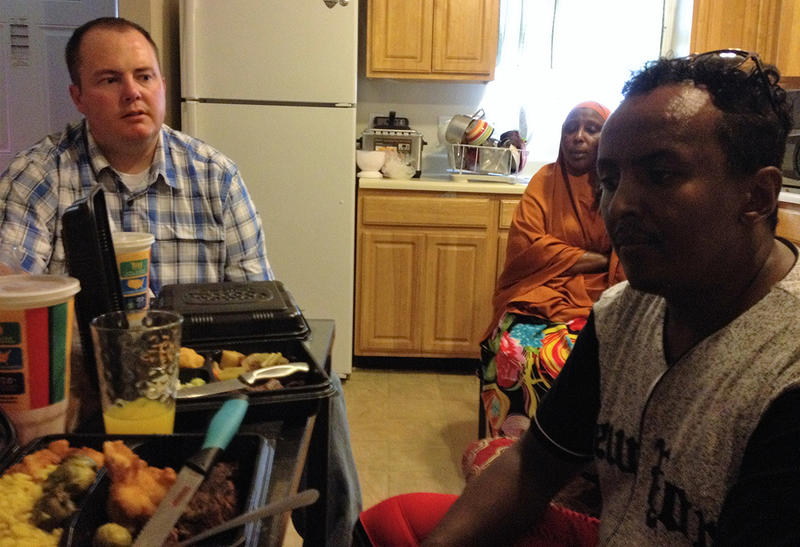 Nelson admits to some trepidation before the Musa family came to the Nelsons’ home for dinner based only on what he had heard in the media about people from Muslim nations like Somalia.

“Everywhere you go, the media shows anybody who’s different than somebody as scary,” Nelson says. “I’m protective of my kids. I want them to be safe, and I want them to go into situations where I know they’re going to be safe.”

But Nelson says young Abdi helped put everyone at ease.

“This little kid, he came in and was playing with our kids right off the bat,” Nelson says. “It was kind of cool.”

And once Musa started talking and asking questions, Nelson came to a realization.

“You know what? They’re just like us. It’s not us versus them, it’s human beings that you really connect with,” he says. “These people here are wanting to get out, and they want people to know who they are.”

Anderson says some of the refugee families also waffled about participating.

He recalls some of them saying, “I just don’t know what I’m exposing my family to. This seems too risky.”

But when they actually spent time with the immigrant families, when they saw their kids play together, the nervousness went away.

Anderson says Musa, whom he’d also met at the African Shop, was instrumental in persuading many of the Somali families to take part in the meal swap.

Musa came to the United States as a refugee one year ago. Like Keynan, Musa and Anderson had struck up a conversation and ended up exchanging phone numbers. He’s grateful that Anderson is willing to go to bat for him.

“You know (Ben) how many times I have some problem, and I call you, and you give me good advice, and I follow your advice and I win, I succeed,” Musa says.

So he jumped at the chance to visit the Nelsons’ house, learn more about life in the United States and make connections with Americans.

After getting to know him over dinner, Musa sees Kody Nelson as a resource too.

“If I need something, I can contact with him, and I can ask him, and he can help me, because he was born here,” Musa says.

Nelson is happy to play that role. He now considers Musa his friend. They’ve met again since the meals brokered by the dinner exchange project.

“These guys have gone through more than my kids will ever understand, but yet they’re willing to come out and learn and be a part of our family,” Nelson says.

Musa grew up in Somalia, a country that hasn’t had a functioning government for 26 years. And when he went to an office in Mogadishu to seek work so he could feed his family, he was spotted by someone from the Al Shabab terrorist group.

They somehow got his mobile phone number and called him late at night, saying they intended to kill him. Ahmed took the threat very seriously and fled to Malta — taking a three-day boat trip on the Mediterranean Sea.

He lived there in a refugee camp until he was able to find a job and an apartment. Finally, after more than four years, he was allowed to come to the United States.

Now, Musa has a hot, difficult job on the killing floor at the meatpacking plant — but he makes what he considers a decent wage, $17.75 an hour. In what little spare time he has, he’s working to get a GED.

Anderson, meanwhile, hopes the practice of hosting a new neighbor for dinner will catch on across southwest Kansas and beyond.

“The dinner table is one of the most powerful weapons in the quest toward social justice, and common understanding, and racial reconciliation,” says Anderson, who is motivated by his Christian faith. “If we can sit at a dinner table and break bread together, anything is possible.”

Anderson already is making plans to expand the dinner exchange next summer. He expects some of the families that took part in this first exchange will continue to encourage cross-cultural relationship-building throughout the year. In fact, several American-born families are making plans to host at least 30 Sudanese refugee families on Thanksgiving Day this year.

Bryan Thompson is a reporter for the Kansas News Service, a collaboration covering health, education and politics across the state. You can reach Bryan on Twitter @KSNewsBryan.

The federal commission in charge of enforcing workplace anti-discrimination laws found a Colorado meatpacking plant violated the rights of its Muslim workers during a dispute over prayer breaks.

The Equal Employment Opportunity Commission (EEOC) found reasonable cause that Cargill Meat Solutions and labor union Teamsters Local No. 455 violated the rights of Somali workers when it fired nearly 150 of them for failing to show up to work after a walk-out at its Fort Morgan, Colo. beef plant in late 2015.

There’s a new clinic in Garden City, Kansas that aims to provide the community’s refugee population with healthcare and language services.

As the Garden City Telegram reports, Dr. John Birky, CEO of the New Hope Together clinic, said the organization is dedicated to improving the physical, spiritual, and socioeconomic well-being of refugees in the community through healthcare services, English language learning and mutually beneficial relationships.

Immigrant communities diversify the face of a rural Colorado city

The bell signals the start of second period. A trio of young women take seats in English class, their attention quickly drifting outside the walls of the high school in Fort Morgan, Colorado, eager to talk about what they’re working toward.

A couple of weeks ago more than 200 Muslim workers walked off their jobs at a Cargill meat plant in eastern Colorado. Now the vast majority of those workers have been fired, reports The Denver Post.

The Roth family, founders of Beef Products Incorporated, announced this week that they have established a $10 million fund to benefit former employees.

The Amarillo Globe-News reports that the money will go toward helping communities affected by plant closures. In 2012, BPI laid off approximately 750 employees and closed three production facilities, including plants in Amarillo and Garden City.

Garden City’s Big Pool is featured in a time-lapse video by the Wichita Eagle, showcasing its recent transformation.

Garden City artist Justin Brown recently gave the Big Pool’s bathhouse a facelift of sorts, spending day and night spray-painting a multi-colored mural on the exterior of the building that includes an abstract lion and elephant, a bird that appears to be emerging from blue and purple ocean waves, as well as a brightly-colored beach ball.