A hot job market and the increasing cost of tuition have slowed the growth in the number of Kansans earning a college education nearly to a halt. Educators are worried that will worsen shortages of high-skilled workers and impede prosperity long term.

“It is concerning,” said Donna Ginther, an economist at the University of Kansas. “Having these types of degrees and certificates are very important for the future of economic growth in the state and the country.”

Kansas’ public colleges and universities granted 40,856 undergraduate degrees and certificates last year, according to the latest progress report from the Kansas Board of Regents. That's virtually the same as five years ago and well short of the state's goals. 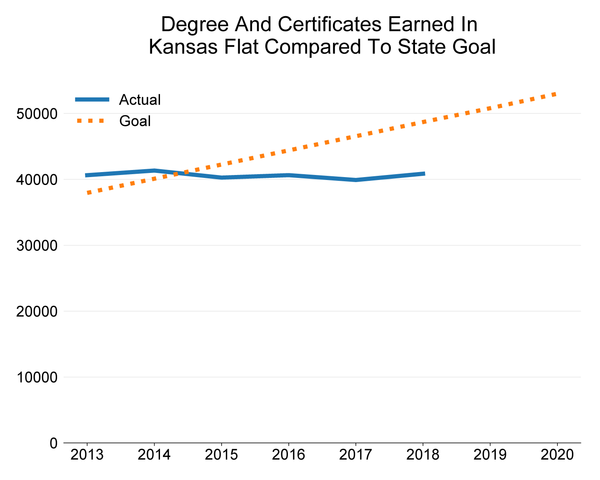 Kansas is nine years into the 10-year “Foresight 2020” plan designed to increase the number of Kansans getting post-secondary education and to better align state college and university programs with economic needs.

The Regents have found some success, particularly in technical education.

An initiative started in 2012 greatly increased the number of Kansans earning college credit before they graduated from high school. More than 10,000 students participated last year. And many of those students have continued technical education programs after high school, contributing to the growth of technical colleges by more than a third from 2012 to 2017.

Yet most of the state's other colleges and universities have gone the other direction.

The headcount at community colleges shrank by 12 percent between 2012 and 2017. State universities grew less than half of a percent, with many seeing declines.

There are likely not enough students currently enrolled for the main objective in Foresight 2020 — more than 53,000 degrees and certificates earned by the end of this decade — to be achieved.

Much of the declining enrollment at Kansas colleges and universities is among white students. Their enrollment numbers have dropped 12 percent since 2010, according to data in the Foresight 2020 progress report. Enrollment by Hispanic students has grown the most, by more than 42 percent.

The progress report blames several factors outside of the Regents’ control, including the Kansas economy. The low unemployment rate means Kansans are able to find jobs without a college degree.

In the early days of the recovery from the 2008 recession, college enrollment increased in Kansas as elsewhere. Unemployed Americans decided to go back to college instead of hunting for non-existent jobs.

The reverse was true as the economy continued to improve. In 2013, enrollment in Kansas colleges plunged as the Kansas unemployment rate hit 5.3 percent.

But while more Kansans are now employed, many remain shut out of high-skill, high-paying occupations that offer a pathway to the middle class.

“A high school education is not going to cut for economic prosperity,” Ginther said.

Ginther and others also worry that high-skill industries such as aerospace manufacturing that Kansas is trying to foster will experience increasing workforce shortages without more Kansans completing a college education.

Rising tuition has also driven students away from Kansas schools.

Students have born more of the cost of their education at public universities as the state repeatedly cut over the past decade.

Higher tuition could be an outsized barrier for poorer students. The number of Pell Grant recipients at Kansas universities, students receiving grant money for college from the federal government, has been declining since 2015.

Studies have shown a link between increasing tuition and decreasing enrollment, though there are disputes over the size of the effect. What’s indisputable is the massive leap in cost colleges have seen over the years. At Kansas State University, the sticker price for a semester has increased 57 percent over the last ten years.

"When I started at K-State in the late ‘60s I paid out-of-state tuition and was able to work my way through the university with summer jobs and employment through the school year," said Pat Bosco, the vice president for student life at Kansas State University. "That's no longer the case now."

Stephan Bisaha reports on education for KMUW in Wichita and the Kansas News Service, a collaboration of KMUW, Kansas Public Radio, KCUR and High Plains Public Radio covering health, education and politics. Follow him on @SteveBisaha.

Texas is moving closer to providing affordable college educations to its residents.

Laura Kelly isn’t the first governor to highlight a crisis in child welfare, or to inject cash into the Department for Children and Families.

Expectations run high for Kelly, who sat on a task force examining the child welfare system for more than a year. She’s made fixing foster care a high priority — it was one of just three topics she homed in on in her State of the State address last week.

Statehouse Blend Kansas: So It Begins...

My Fellow Kansans is on hiatus for the legislative session. Meanwhile, our podcast Statehouse Blend Kansas is exploring the governing of our state. Host and Kansas News Service reporter Jim McLean talks with policymakers and everyday Kansans affected by their decisions. This is the first episode of the 2019 session. If you like it, subscribe in your podcast app.

He’ll cringe when he reads this but, Republican U.S. Sen. Jerry Moran is part of “the resistance.”

Not always in obvious ways. Moreover, not in ways that come close to comforting those who view President Donald Trump as a clear and present danger to the nation.

But in his own quiet, Kansas way Moran resists the chaos of Trump’s Washington by advocating for a return to “regular order” in the U.S. Senate and the nation.

Different in style but still much like his late colleague, Sen. John McCain of Arizona.

Sorting Fact And Fiction From Politicians On Kansas Schools

Here’s some context for the statements you heard about Kansas education Wednesday night — both in Democratic Gov. Laura Kelly’s State of the State Speech and Republican Senate President Susan Wagle’s response.