A Surplus Of Meat And Dairy Puts A Strain On U.S. Markets And Storage

Meat and dairy are piling up across the U.S. It has cold storage places packed to the rafters, and the federal government, which subsidizes the agriculture industry, looking for ways to alleviate the problem, at least in the short-term.

Listen
Listening...
/
Harvest Public Media's Jonathan Ahl explains why there's a "perfect storm" when it comes to an oversupply of meat and dairy.

A combination of factors have led to this: increased production, flat demand despite near-record consumption of milk and cheese and trade issues. And in the long run, it’s unclear whether market forces will get production in line with demand.

The facilities he represents are at 86 percent capacity, he said, adding, “In our space, anywhere from 82 to 90 is considered full. There’s significantly high capacity and very little space available out there.”

The market is unfazed

According to the U.S. Department of Agriculture, the average American is projected to eat 220 pounds of meat and consume more than 200 pounds of milk and cheese this year. That’s near the records set in 2007, right before the recession.

Production never stopped, though. It increased, despite the fact that demand is only now returning to pre-recession levels. On top of that, prices are low and the meatpacking and dairy sectors are increasingly efficient.

Bill Roenigk, an agricultural economist who works for several meat companies and trade groups, said producers are really only looking at one thing — the bottom line. 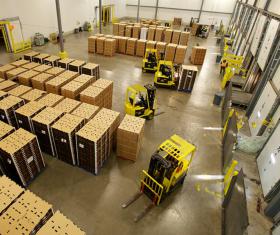 On the dairy side, Roenigk said government subsidies and increasing demand for cheese is propping up a business that is seeing milk demand slide.

“I don’t think companies are overly panicked when you ask them, is there too much meat and poultry out there,” Roenigk said. “I think most companies are in a position to manage any kind of adjustments that need to come.”

Other industry analysts say the situation is unsustainable. Production has been outpacing demand for long enough that a breaking point is coming, University of Missouri ag economist Scott Brown said.

“It is sending the signal to the supply side of these industries to at least slow the growth that we have seen in the last few years,” Brown said. “So as I look ahead to 2019 and 2020 in particular, it seems like we are going to find a little better balance.”

Chicken and pork are the industries most likely to nimbly change, Brown said, as chickens and pigs reach slaughtering age much quicker than cows. It’ll take the beef industry longer to curtail production.

Brown also said trade issues may be the wild card, such as the Trump administration’s tariffs on chicken and the changes to the North American Free Trade Agreement that has reduced exports to markets, including China and Mexico.

“If those trade situations continue,” Brown said, “it’s hard to imagine producers won’t be forced to reduce their production.”

The extra meat and dairy has helped one segment: Food banks and the people they serve.

The St. Louis Area Foodbank recently received so much additional milk that they scheduled an extra distribution day to hand out half-gallon jugs of whole milk to more than 100 cars lined up in a vacant parking lot.

“It's a blessing to us,” said Lenora Gooden, Director of Operations for the St. Louis Area Food Bank. “Because it’s milk, and the stuff that can go bad quickly, that we don’t have to purchase. Because we don’t get it donated so much, in these quantities.”

Gooden said the food bank is scheduled to get a similar delivery of meat in April.

“We’ll take whatever they can give us. We just get a little more creative in how we distribute it,” Gooden said.

Not to mention, there’s been some relief to the food pileup. China has had to kill millions of hogs due to an outbreak of African swine fever, leading the country to buy 23,000 tons of U.S. pork despite a 62 percent tariff. That’s meat that would have otherwise gone into cold storage or to food banks.

The U.S. meat industry is gigantic, with roughly $200 billion a year in sales and growing. But the industry faces emerging threats on two fronts: plant-based meat substitutes and actual meat grown in labs.

Like many of the refugees who have resettled in Greeley, Colorado, 35-year-old Abul Basar is employed by JBS.

It’s a massive meatpacking plant that processes thousands of cattle per day and employs over 3,000 people. After a year of working on the plant’s processing line, where he disembowel cow carcasses with a large electric knife, Basar injured his right hand.

Farmers along the Missouri River and its tributaries are still assessing damage from recent flooding.

But beyond the farms in parts of Iowa, Nebraska, Missouri and Kansas, there’s visible evidence that the impacts are far-reaching and long-lasting — closed interstates and rerouted trains — key cogs in a global agriculture economy.

Farm income has taken a long, hard fall, dropping 50 percent since hitting a high point in 2013. Add to that near-record levels of farm debt, and you have a recipe for financial stress.

But while economists say they can see storm clouds building, it’s not a full-blown crisis. That’s because relatively few farms have been pushed past the breaking point into Chapter 12 bankruptcy — or, worse, into losing the farm entirely.

Disease-Resistant Strain Of Rainbow Trout Is Helping The Species Rebound

Starting in the late 1980s, rainbow trout in Colorado began dying off because of a parasite that causes whirling disease. By 1997, wild rainbows in the state had all but vanished.