Survey: Thanksgiving Dinner Cheapest It's Been In 5 Years

Shoppers, check your receipts when you buy Thanksgiving dinner ingredients. It’s likely the total cost will be the lower that what you paid in 2013.

American Farm Bureau Federation volunteers scoured stores in 39 states to record prices for traditional Thanksgiving fixings. The survey found that for a party of 10, an average dinner runs $49.12 — 75 cents less than last year.

The primary reason? Turkeys. Lots of them. The commercial turkey flock has recovered from the massive bird flu outbreak to the point that the U.S. Department of Agriculture predicts farmers will produce more than 6 billion pounds of turkey this year. That’s 10 million more than 2016.

In turn, wholesale turkey prices are just under a dollar per pound for the first time since 2013, according to John Newton, the federation’s market intelligence director. Shoppers will be charged an average of $1.40 per pound.

“In addition to that, just the protein complex in general when you're talking about protein or chicken or pork or beef is very competitive this year, Newton says. “So that leads to even more price discounts to consumers.” 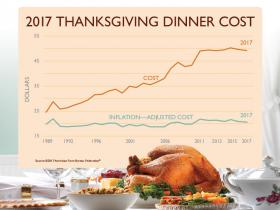 Frozen turkeys are up 22 percent compared to last year, Newton says, which has contributed to the turkey glut.

It’s not just cheaper meat, though. Milk, sweet potatoes and rolls are cheaper this year compared to last.

But dessert will cost a little extra, as whipping cream and pumpkin pie mix are up eight cents from last year.

Looking forward, Newton anticipates 2018 Thanksgiving prices will be similar to this year unless there are livestock diseases or weather issues.

Every year at Thanksgiving, I spend quality time with my grandmother, a wonderful woman who died about 40 years ago.  Together, early each Thanksgiving morning, she and I pour a cup of coffee, dig out a handwritten recipe card, peel, cut up, and boil one large potato, and set about creating “Memama’s sweet roll dough.”

For Thanksgiving, A Story of John F. Kennedy, Pilgrims, and the Commonwealth of Virginia

This holiday, here’s a little known story about Thanksgiving in America, courtesy of TIME magazine.

Many schoolchildren learn that the first Thanksgiving occurred between Wampanoag Indians and English Pilgrims at the Plymouth Colony in 1621.

The Harvest Moon: A Poem of Thanskgiving by Henry Wadsworth Longfellow

Here’s a poem for Thanksgiving:

It is the Harvest Moon! On gilded vanes

And roofs of villages, on woodland crests

And their aerial neighborhoods of nests

Deserted, on the curtained window-panes

Of rooms where children sleep, on country lanes

And harvest-fields, its mystic splendor rests!

Gone are the birds that were our summer guests,

With the last sheaves return the laboring wains!

All things are symbols: the external shows

Green bean casserole a Thanksgiving tradition in its own right

Move over turkey. Step aside stuffing.

Green Bean Casserole, an iconic Thanksgiving dish, turns 60 years old this year and it’s as popular as ever.

Love it or loathe it, the classic Midwestern casserole has come to mean more than just a mashup of processed food sitting next to the mashed potatoes.

Black Friday may soon be a thing of the past on the High Plains, as in the rest of the country.

As NBC News reports, Black Friday is slowly being replaced by what many retailers are referring to as “Black November.” And some of the deals that consumers have come to expect on Friday are already available. For example, Amazon launched its Black Friday store last Tuesday.

Large Livestock Farms Won't Have To Report Air Pollution Until 2018

Story, headline updated Nov. 22 with ruling — A U.S. appeals court has agreed to the EPA's request for more time to implement the emissions-reporting requirement. The mandate will now go into effect on Jan. 22.

If you pull a fire alarm in any large U.S. city, it's likely that paid firefighters waiting at a nearby station will quickly respond. But seven out of 10 American firefighters are volunteers. They cover vast sections of the country, making up an aging network that is increasingly understaffed and overworked.

Dicamba Has Been Around For Years. Why Would It Now Be Causing Problems?

The herbicide dicamba is thought to have been the culprit in more than 3 million acres of damaged soybeans across the country, destroying plants and leaving farmers out millions of dollars in crops.

The chemical has been in use for decades, so why is it today apparently causing farms so much damage?