Texas GOP Controls The State, But Continues Fight Over Controlling The Future

Political party conventions are always about the future – the next election, to be specific, but also the five- and 10-year plan for growth.

The last couple of decades for Texas Republicans have been pretty rock solid. In 2014, Gov. Greg Abbott won the election by 20 points. And in the 2018 primaries, Republicans set records for voter turnout in an off-year election.

So at the ballot box, Texas Republicans are the Avengers at the end of the first movie – completely victorious. And Friday morning, Abbott took a victory lap. 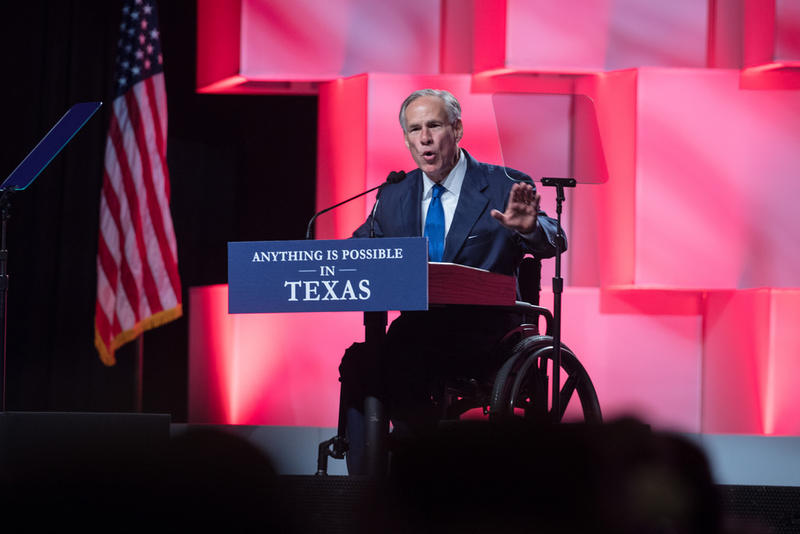 “And I’m proud to tell ya,” he said to convention delegates, “that as we gather today, Texas is better than it was four years ago.”

But, despite the list of accomplishments Abbott read off at the convention, there are groups within the state GOP worried about the day when the party looks more like the Avengers at the end of Infinity War, when – SPOILER ALERT – half of them are gone.

“We have to bring more people into this party,” outgoing party Vice Chairman Amy Clark said during a speech Thursday. “We cannot continue to keep this state red if the only Republicans in Texas are the Republicans right here.”

While she didn’t sound desperate in her plea for expanding the party, it was a warning that Republicans can’t keep doing the same thing and expect the same results.

You heard that argument in bits and pieces all around the convention, for instance in delegate Ashley Swoboda’s plea to remove the “homosexual behavior” plank from the party platform.

“This kind of language makes no sense to young people, the people that we’re trying to appeal to,” she told the platform committee during a public comment period. “Even if this language is kept, I can assure you that my generation will change it in due time. If not, the Republican Party will not grow, and we will only lose ground in the future.” 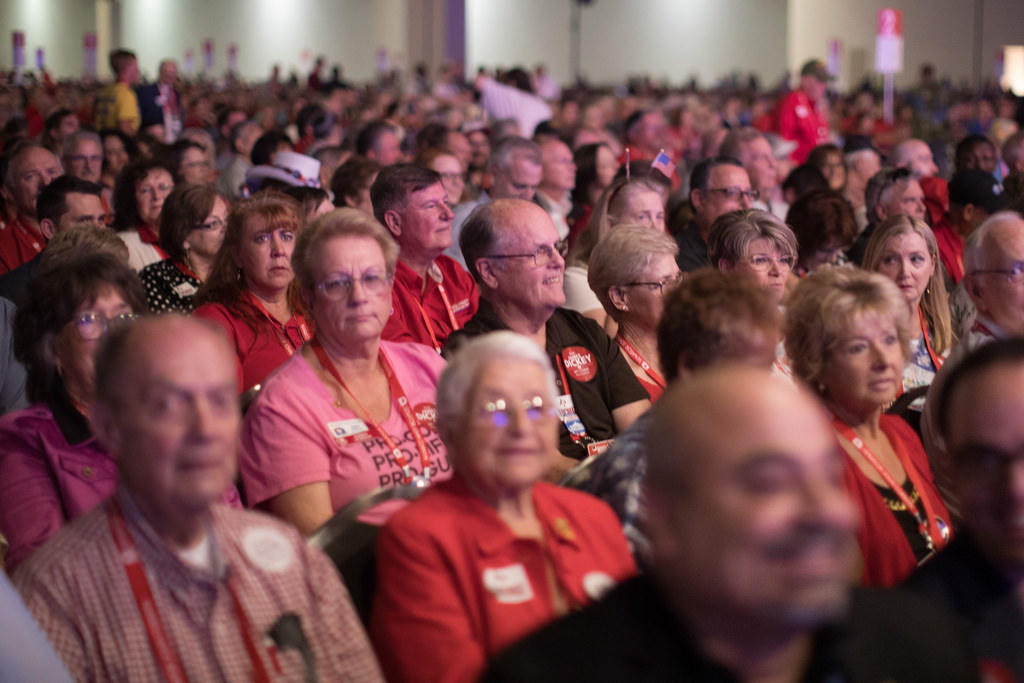 There’s also the fight over the party’s immigration policies and how they affect Hispanic outreach.

“I think there are a lot of people here in the Republican Party who maybe think that you don’t need the Hispanic vote to win,” delegate Temo Muniz said. “It’s tough to overcome that mentality.”

Muniz, the Texas chairman of the Federation of Hispanic Republicans, has been a vocal advocate of Hispanic outreach in the party both in Texas and nationally. In 2016, he worried hard-line immigration talk from then-candidate Donald Trump would end up shrinking Hispanic support.

But, of course, if a majority of the Republican delegates agreed with Muniz and Swoboda, then the party would have pushed for changes during the convention. For the most part, that didn’t happen. There’s still a party plank on homosexuality because some delegates feel the same way Craig Lecarty does.

“As Republicans we’re conservatives. We conserve,” he said to the platform committee Thursday night. “We protect from destruction that which is true. And it’s a travesty that we would have the gall to ignore God and that we would exclude him from our platform.”

Muniz said there’s still little effort to connect with the Hispanic community – a decline he’s seen that began after former Gov. Rick Perry came out against a controversial immigration bill Arizona passed a few years back.

“Rick Perry stood up and said, ‘Not in Texas,’ and that was huge,” Muniz said. “Now we have SB 4 [the new law banning sanctuary cities]. And it’s tough, too. It’s hard to help people understand how much effect that’s going to have down the road.”

But, he still has hope that Republicans can attract Hispanic voters heading into the November elections. He said the looming immigration vote in the U.S. House could really help.

During a live interview with FOX News earlier today, President Trump said he “certainly” wouldn’t sign a more moderate compromise bill on DACA and immigration. The comments threatened to derail a planned vote next week. But this afternoon, a House GOP source told NPR he “just misunderstood” the question and would support the legislation.

James Dickey Wins Re-election As Chairman Of The Texas GOP

SAN ANTONIO — Texas GOP Chairman James Dickey has won re-election, beating back a challenge from longtime activist Cindy Asche after a long and bitter fight on the convention floor Friday.

Beto O’Rourke has now appeared in every county in Texas, including each of the counties in the Texas Panhandle.

But, as The Dallas Morning News notes, the young congressman from West Texas still has an uphill battle to unseat Senator Ted Cruz. O’Rourke has been crisscrossing Texas for 14 months, live-streaming his effort to visit all 254 counties in the Lone Star State.

Fewer Texans are reporting domestic violence, and police say the drop is a result of immigrant fears of deportation.

As The New York Times reports, many Texas women who are beaten or raped by their partners fail to report the crimes, choosing to go into hiding rather than appear in court and risk being separated from their children.

WASHINGTON - U.S. Sen. Ted Cruz has some breathing space from U.S. Rep. Beto O'Rourke, according to a new poll released by Quinnipiac University on Wednesday.

Gov. Greg Abbott laid out a plan this morning to increase school safety in Texas after the Santa Fe High School shooting. The plan offered suggestions that focused on “hardening schools” and increasing mental health services through as much as $120 million in federal and state grants for schools.

Nobody in Texas "wants to see another occasion where innocent children are gunned down in their own schools,” he said as he rolled out the 40-page plan at the Dallas Independent School District headquarters.

Medical Groups Push To Increase Texas' HPV Vaccination Rate, One Of The Worst In The U.S.

Only about a third of kids in Texas are getting vaccinated against the human papillomavirus (HPV), which is linked to several cancers. The state ranks 47th in the country for its vaccination rate, according to the Texas Medical Association.

With Suicide Rates On The Rise, Experts Say It’s Essential To Reach Out To Those Who Are Struggling

As many reacted with shock this week to the deaths of designer Kate Spade and celebrity chef Anthony Bourdain, we also learned from the Centers for Disease Control that suicide rates have risen in nearly every state between 1999 and 2016, the latest year for which complete data is available. Though Texas remains below the national rate, suicides have been rising here, too. The state experiences 12.9 suicides per 100,000 Texans. Across the nation, there were more than twice as many suicides as homicides in 2016. The CDC says these trends cannot be linked to any specific medical diagnosis.

What Would Trump's Coal Bailout Look Like In Texas?

Energy Secretary Rick Perry said this week that the Department of Energy is working on a plan to subsidize coal and nuclear power in the name of national security. While the details are scarce, the idea’s been the subject of speculation and criticism from energy experts, environmentalists and grid operators.

USDA Will Use Bacon-Curing Chemical To Curb Feral Hog Population

Wild boars, feral swine – many call them feral hogs. But as lots of Texans know, they’re the source of much angst and misery. Feral hogs cause property loss of more than $1.5 billion nationwide, about a quarter of which is in Texas. And that may be a conservative estimate. Now, the U.S. Department of Agriculture is stepping in with what it hopes is a solution.

The American Civil Liberties Union has released a report based on some 30,000 pages of internal records from the Department of Homeland Security between 2009 to 2014, obtained through the Freedom of Information Act. What they’ve found is what they call “the pervasive abuse and neglect of unaccompanied immigrant children detained by U.S. Customs and Border Protection.”