In Their First Week Back On The Job, Federal Workers Play Catch Up To Aid Farmers

At her desk in Greeley, Colorado, Shelly Woods pulls out three thick stacks of manila folders. These files represent dozens of local farmers who’ve applied for safety-net programs, including tariff relief through the Farm Service Agency. While Woods and about 800,000 federal colleagues were furloughed for 35 days, the work piled up.

Now that the FSA office has reopened, she said, these files require her immediate attention and that means missing out on the annual Colorado Farm Show, which she’d been looking forward to.

“Our supervisor said we could (go) if we wanted but I just feel an obligation to get this all done.“ Woods said.

Some of her coworkers spent their unexpected time off tackling home improvement projects or visiting family. But as the breadwinner. Woods said she worried about how she’d support her family without a paycheck. Then she learned of a local bank offering interest-free loans for furloughed federal workers.

“I took advantage of that and that was a godsend because it helped me because I was a nervous wreck to be honest,” she said.

The reopening of the federal government also is a relief to farmers who were without access to resources like the market facilitation program. The Trump Administration program, via the U.S. Department of Agriculture, offers direct payouts to help people who grow crops like soybeans, cotton and corn recoup their losses due to the ongoing trade war with China. 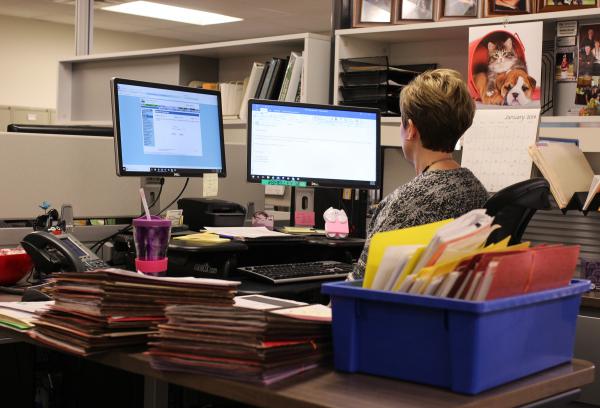 Ron Farmer of Greeley grows corn, and said he couldn’t sell his grain until the government reopened, because he needed to report to the FSA how much he’d harvested in order to qualify for payments.

“So we were waiting to report our bushels, which is what I’m in here doing today,” he said.

On Jan 8, the U.S. Department of Agriculture announced they’d be extending the application period until Valentine's Day; the original cutoff date had lapsed during the shutdown.

Farmer said he’d been through several shutdowns but none that ever lasted this long.

“It’s been an ornery situation for everybody to have to deal with,” he said.

According to the FSA office staff, January is typically a slower month for the agency; the visitor’s log lists just five names since they reopened Monday. It’s in the spring when they see more activity as farmers put crops in the ground.

Diane Pierson, who manages an FSA program for crop disasters, said only a few programs were interrupted. Had the shutdown stretched into March, she said, farmers would have been unable to report their annual sales.

“(It) could have become an issue, which it still can if we close down again,” she said.

Congress and President Donald Trump need to strike a deal before Feb. 15, at which point the stopgap funding bill expires. If they’re unsuccessful, federal workers could be furloughed and farmers would again be without their assistance.

The U.S. meat industry is gigantic, with roughly $200 billion a year in sales and growing. But the industry faces emerging threats on two fronts: plant-based meat substitutes and actual meat grown in labs.

This week, the U.S. Department of Agriculture determined that only foods containing detectable genetic material should be considered as bioengineered or genetically modified (GMO).

The USDA was tasked with deciding if refined products, like soybean oil and corn sweeteners, should be considered a GMO food. It said they are not, which is a victory for sugar beet farmers.

On top of a second round of payments to farmers as part of the U.S. Department of Agriculture’s trade relief program, the agency is trying to ease the impact by purchasing surplus food and distributing it to food banks and other hunger relief groups.