It was an appropriate week for the U.S. Department of Agriculture’s trade expert to address a gaggle of Nebraska farmers — even if their responses tended toward frustration.

Ted McKinney arrived in Omaha on Wednesday, the day China threatened to impose tariffs on 106 U.S. products including major exports like soybeans, beef and corn. China’s move came after the Trump administration’s attempt to reign in China’s abuse of intellectual property rules by proposing tariffs on $50 billion worth of Chinese imports.

If the proposals become reality they could undermine a stagnant farm economy, and not just in Nebraska. “We have bills to pay and debts we must settle and cannot afford to lose any market,” Kansas Farm Bureau President Richard Felts said in a statement.

Listen
Listening...
/
Harvest Public Media's Grant Gerlock spoke with the USDA's leader on trade, a U.S. senator and some farmers in the wake of the burgeoning trade war with China.

McKinney said negotiations with China were expected to cause some “turbulence” in the ag economy, but he believes the federal government must try to stop China from stealing intellectual property from American businesses, including in the agriculture sector. 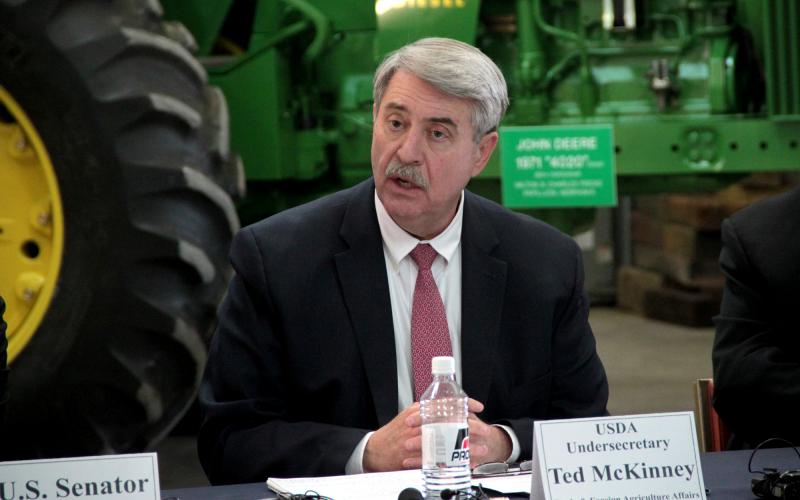 “In agriculture it’s rampant,” McKinney said. “Stolen seed germplasm. Not 20 miles from my home (in Indiana), a feed company had some intellectual property stolen. This is an attempt by the president to say ‘There’s probably no good time to do this kind of thing, but we’ve got to get China to play by the rules.’”

China bought $19.6 billion worth of U.S. agricultural products in 2017, and exports are one of the few options that farmers have to raise currently depressed commodity prices — by increasing demand for their products overseas.

McKinney acknowledges that the trade dispute could cut into that strategy.

“Now could not be a worse time with the thin, if not negative, margins our farmers are feeling,” McKinney said. “I would just encourage our farmers and ranchers, and for that matter our processors, to just be patient because this is a longer road and I think the outcome will be good.”

But farmers at an Omaha roundtable questioned whether the administration has a coherent strategy to quickly resolve its trade differences with China.

“This administration seems prone to whatever spur of the moment thoughts that pop into the president’s head,” said Bart Ruth, a corn and soybean farmer from Rising City, Nebraska. Ruth added that farmers and farm groups like the American Soybean Association spent decades building a market in China, and “to see it threatened in a trade war that really makes no sense is disheartening.”

McKinney insisted the administration understands farmers’ concerns and will take steps to protect them from trade retaliation, but said it’s too soon to detail what those steps will be.

He also said the USDA is hoping to calm the waters by working to finalize a new NAFTA agreement with Canada and Mexico — where a large proportion of American exports go — and reopen talks with Japan that could possibly even lead to the U.S. rejoining the Trans Pacific Partnership.

There’s “grave concern” among Republican U.S. Rep. Don Bacon’s Nebraska constituents and companies in his district. However, Bacon, a member of the House Committee on Agriculture,  said, “we can’t ignore what China is doing.”

Fellow Republican U.S. Sen. Ben Sasse said it’s important to protect intellectual property, but the Trump administration’s hardline tactics are putting undue pressure on the farm economy. Instead of tariffs, Sasse said the U.S. should pressure China by joining more trade alliances like the TPP, which President Donald Trump pulled out of shortly after taking office.

U.S. Sen. Roy Blunt, a Missouri Republican, said much the same at a visit to the state capitol Wednesday, telling the St. Louis Post-Dispatch that he’d warned Trump about starting a trade dispute.

“A trade war always has unanticipated consequences and is harder to get out of than it is to get into,” Blunt said.

Farmer Dan Wesley of Morse Bluff, Nebraska, said he hopes the dispute can be settled within a couple weeks. By then, he said, he’ll be planting corn and have enough on his mind.

“If we can get past this sooner than later,” he said, “then we can go back to dealing with Mother Nature and all the problems we’re used to as farmers.”

China has announced its intent to add additional tariffs to 106 U.S. products, including several of Kansas’ top agricultural exports.

Hog Producers Brace For Trouble Due To China's Tariffs On Imports

Updated April 4 to clarify the export percentage — China matters to the U.S. pork industry, as more than a quarter of all hogs raised here are shipped there. So, China’s decision to up its tariffs on 128 U.S. products, pork included, worried producers and rippled through the stock market.

Facing New Tariffs, The Texas Manufacturing Industry Could Be Vulnerable

According to the Dallas Federal Reserve’s monthly Texas Manufacturing Outlook Survey, activity at Texas factories expanded in March. But the report also indicated that the production index, a key measure of state manufacturing conditions, fell 15 points – the sixth biggest drop since 2004. So what does this mean for the state and its manufacturing industry?

When President Donald Trump follows through on his plan to tax imported steel and aluminum, American farmers will get less money for some crops and pay more for machinery.

Farm groups say their members worry the countries targeted by the tariffs (the list of which has not been finalized by the Trump administration) will tax farm products. The European Union already has threatened imports of corn, rice, cranberries, peanut butter, kidney beans, orange juice and even bourbon, which is usually made from corn.

There is a slight silver lining for consumers, however, because prices of those products may drop in the U.S.

Farmers Take To Airways To Reach Trump About Trade Policies

Farmers are going to attempt to appeal to President Donald Trump about his trade policies via television.

As Politico reports, the 30-second ad is sponsored by  Farmers for Free Trade, an advocacy group that wanted to make the case that foreign retaliation to Trump’s tariffs on steel and aluminum and other pending trade restrictions will have a potentially devastating impact on their exports, if China and other trading powers decide to boost tariffs on soybeans, wheat and other farm goods.