Schools in rural school districts often don’t have the budget or the teachers to offer students all of the courses they would like to take. One rural district in a Missouri county decided to offer credit for online classes in an effort to give its students the educational opportunities it can’t otherwise afford.

In Jefferson County in eastern Missouri, the high school, middle school and elementary school that make up the Grandview R-II School District all occupy the same campus.

“Which is out in the middle of nowhere,” says Superintendent Matt Zoph. “Literally in the woods, in a place where you can't buy a gallon of milk or a gallon of gas.”

Listen
Listening...
/
Listen to this story

Zoph started as a social studies teacher at the high school before becoming a principal and then superintendent. Today, he oversees about 750 students and 65 teachers.

Half of the students in his district qualify for the federal free and reduced lunch program, Zoph says. Enrollment is down, budgets are tight and he has trouble attracting and retaining teachers.

“We’re the lowest paid school district (in the county) minus one K-8 district ,” he says. “So, I’m asking my teachers to do a lot more on a lot less.” 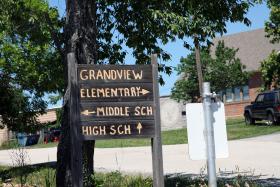 That means he may not have enough teachers for every course. Take physics, for example, a class many assume to be available in high school.

“I may have two or three kids, because we’re such a small school, that are interested in taking a physics course,” he says, “so to offer physics on campus would be tough.”

The costs for lab equipment and textbooks, and the limited number of qualified teachers in town make it challenging to offer a physics course.

“But I can take those two or three kids, put them in a study hall, assign them physics and they can take it online,” Zoph says.

The Grandview district teamed up with a private company in 2014 to launch a virtual public summer school for its rural students. Its goal: give students course options they don’t normally see during regular registration. About 200 students enrolled the first year. Today, similar programs exist in Colorado and Iowa.

The online courses count toward graduation, just like any other, and this summer, more than 1,300 students are enrolled. Now, students in rural districts across the state use the system.

Courses include French 2, Archaeology and Advanced Placement Calculus. Students can log in, complete their required lessons and interact with their teachers -- all online. Some students work on the course from home. Others without internet can take their courses in the library.

“We almost double every year enrollment-wise,” says Elaine Schlett, a librarian in the district who helps coordinate Missouri’s virtual summer school program. “I mean we get them from way down in Walnut Grove, to Eminence, to anywhere in the state -- little rural towns you don’t hear of very often. It’s like ‘that’s a new one this year.’” 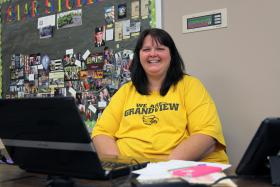 Schlett says she often gets calls from teachers, counselors and parents in other rural districts asking about how the program can work for them.

Superintendent Matt Zoph says people often have a misconception of the potential of rural students.

Online classes are not a fit in all cases. There are questions about quality of the curriculum or the lack of face-to-face interaction with teachers. Some have concerns about students absorbing the material and doing the work. For his district and his students, Zoph says it’s an option that gives them the best chance to succeed with limited resources.

“Because there are so few teachers, there are so few students,” he says. “Most of the time the (rural) schools can’t offer the courses that everybody else is taking. So using (online courses) to compete is only fair.”

Determined residents and local officials have helped turn the tide on a declining population in a northwest Kansas community.

Increased income limits through U.S. Department of Agriculture Rural Development may increase opportunities for rural families to own their own home.

As the High Plains Journal reports, the USDA announced the new 2017 income limits for its direct and guaranteed home ownership loan programs that may make more households eligible to obtain 100 percent financing.

In recent eras, America’s big cities grappled with large numbers of young people who weren’t in school and didn’t have jobs.

Colorado lawmakers heard testimony Tuesday about the financial difficulties facing much of rural Colorado, which helped a bill aimed at preventing cuts to rural communities in the state pass its first test.

As The Denver Post reports, officials from rural schools, hospitals and business groups testified about the dire financial situation facing much of rural Colorado – a situation that they fear will only get worse in coming years.

How does Trump’s budget sit with rural Oklahomans?

The Washington Post recently paid a visit to rural Durant, Oklahoma, to investigate how Trump’s policies are sitting with rural Americans.

The town is still standing behind their choice of Donald Trump, though some cracks in their affection for the New York billionaire are becoming visible.

In Texas Legislature, a battle over higher-education funding

The Texas Legislature has been hard at work this month trying to come up with a budget. And among those watching the proceedings closely, says The Texas Tribune, few have more to lose than Texas’s colleges and universities.

Even as enrollments continue to rise statewide, many schools are likely to see funding cuts. That means less money for more students.

Like many other rural institutions like hospitals and factories, rural colleges have been struggling—and among these, rural liberal arts colleges have perhaps been hit the hardest.

According to U.S. Department of Education data, of the 300 private four-year colleges in rural areas, 43 percent have seen declines in enrollment in recent years.