Of the three leading candidates in the race for Kansas governor, polls suggest Greg Orman is the least likely to win.

Orman is the wildcard in the race, the x-factor, a potential spoiler who probably can’t win, but who could still determine the outcome. That’s according to just about everyone watching, from political scientists to former Gov. Bill Graves, one of several Republicans who have jumped the aisle to endorse Kelly.

“I don't see the scenario,” Graves says, “where an independent is going to be elected governor of the state."

Orman, not surprisingly, doesn’t see it that way. The Olathe businessman got into the race believing that the conventional wisdom about independent candidates was just wrong — particularly at this moment in our political history. 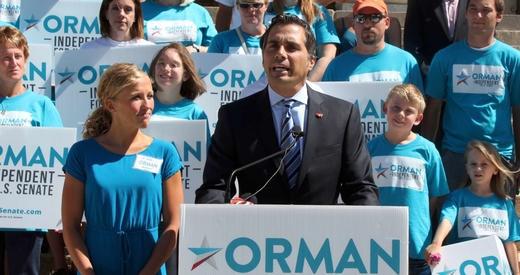 “I think what we're seeing in partisanship today is not necessarily loyalty to our own party so much as it is a hatred of the other party,” he says. “I think that's what our candidacy is about. We're trying to appeal to a broad cross-section of Kansans, Democrats, Republicans and independents.

"We want to give them an inspiring message and a vision for the future so that they can actually vote for a candidate they like, instead of voting against a candidate that they hate and they fear. And I think that's what partisanship is giving people today.”

Orman isn’t the only one arguing that the current system is broken: Rick Kloos, a self-described “frustrated Republican,” is also running as an independent; Jeff Caldwell is on the ballot as the nominee of the Libertarian Party.

Unlike Kloos and Caldwell, Orman is seen as a legitimate contender, likely because of the momentum he gained in 2014 during a close, but unsuccessful, Senate bid many thought he would win against incumbent Republican Pat Roberts.

Orman may understand that he has no clear path to victory in the race for governor. But he says he’s going to continue campaigning right through Election Day — and that might be a concern Kelly, but good news for Kobach.

Among those heard in this episode:

My Fellow Kansans is a production of the Kansas News Service, a collaboration of KCUR in Kansas City, KMUW in Wichita, Kansas Public Radio in Lawrence, and High Plains Public Radio in Garden City.

The podcast is written and reported by Jim McLean, edited by Amy Jeffries, and mixed by Matthew Long-Middleton.

This episode includes clips from MSNBC, CNN, and, our favorite, C-SPAN.

Special thanks to Neal Carruth of NPR and the NPR Training team.

What started as a regional tool to identify where Midwestern voters had registered in more than one state has ballooned into the massive Crosscheck system.

Unlike 33 other states, Kansas still hasn't expanded its Medicaid program under the Affordable Care Act.  The decision would pay for the health care of thousands of people who don’t currently meet the program’s stringent eligibility requirements.

The five candidates for Kansas governor faced off at a forum Tuesday night in Wichita.

It was a rare opportunity for independent Rick Kloos and Libertarian Jeff Caldwell to share a stage with the three major candidates — Republican Kris Kobach, Democrat Laura Kelly and independent Greg Orman.