The online retail giant Amazon announced a deal in June that showed its latest ambition: to completely change how America gets its food.

The latest step toward that goal is a proposed merger with Whole Foods Market, worth nearly $14 billion. The deal recently passed a key hurdle after the U.S. Federal Trade Commission decided the sale  would not hamper competition or provide an unfair advantage.

For years Amazon has been making moves and launching programs to make food a bigger part of its business.

There’s AmazonFresh, a grocery delivery and pickup service with locations in cities across the country, like Denver, San Diego and Seattle. Amazon Local Market, another program with limited availability, sources local food products for sale on Amazon’s website. It’s beta testing a retail store called Amazon Go where shoppers can grab premade food from shelves. Your smartphone logs the purchase from a little kiosk when you walk out the door.

Its biggest play yet in shaking up the food system came with the announcement of its pending Whole Foods nuptials. The deal -- Amazon’s most expensive to date -- has the potential to force its retail competitors to step up their game in online grocery shopping. Retailers like Kroger and Safeway have dabbled in grocery delivery and curbside pickup for a few years now, to modest success. But with Amazon’s rapid expansion through the Whole Foods footprint, the whole landscape for how we get our groceries is primed for some big changes.

Even if the average shopper doesn’t equate Amazon with groceries now, it’s intent on becoming a food retailer. A big one.

To get a sense of its ambition, take a look at a recent commercial for the Amazon Dash Wand, a smart magnet that sits on your fridge. In the ad, a woman holds the gadget and stands in front of the fridge. She speaks into it to find a recipe, scans items for a grocery list that populates on her phone, before bags appear magically at her house.

The commercial makes this effortless last minute dinner party seem like an aspiration aided by a futuristic piece of domestic technology. But at the end it tells customers how to buy their own smart magnetic companion.

“Five or 10 years ago, people would’ve never thought that [an] everyday ordinary consumer would be interested in buying their groceries online,” says Pamela Riemenschneider, editor of Produce Retailer, a trade magazine for fruit and vegetable growers.

With its purchase of Whole Foods, Amazon gets a big boost to its food infrastructure, Riemenschneider says. AmazonFresh does both delivery and pick up of pre-ordered groceries. Even though grocery delivery is available in bigger cities across the country, right now Amazon has only two physical pick up locations for AmazonFresh, both in Seattle. Having Whole Foods on board gives AmazonFresh 430 additional pick up spots, she says.

Amazon’s move to buy Whole Foods can also speed up the process of making online groceries mainstream. Hiring their own teams of produce buyers and building food system know-how from scratch would be a huge undertaking for Amazon.

“Buying Whole Foods outright means they don’t have to do do all that legwork. And that is years worth of legwork,” Riemenschneider says. “That’s not something you can do in six months.”

Adding on food delivery requires an investment in on the ground infrastructure as well. That’s the case in Denver, where AmazonFresh is still relatively new. The retailer added an AmazonFresh fulfillment center a few miles north of downtown Denver this year. It sits on a hill overlooking the city’s skyline, not far from Interstates 70 and 25, major arteries in the city, and to the rest of the state. 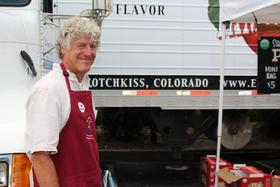 News of Amazon’s appetite for Whole Foods trickled out to the farmers and ranchers who sell to the natural foods grocer. After a few years of struggling sales figures, rumors swirled that Whole Foods was ripe for the picking and other large retailers were eyeing it. Western Colorado fruit grower Steve Ela says he was surprised when he heard the news.

“I honestly didn’t expect Amazon because I personally don’t think of them as food retailers,” Ela says.

Each weekend during the summer and early fall, Ela packs up a semi truck full of fruit from his farm outside Hotchkiss, Colorado, and hauls it to cities like Denver, Boulder and Fort Collins.

His fruit travels even further when he sends a shipment to a Whole Foods distribution center. In a given year, Ela says they’ll take about a third of his crop. He’s sold fruit to Whole Foods for more than 15 years and it has worked out pretty well.

“They’ve often paid us more than other outlets,” Ela says. “And honestly, they’re the only big box store we work with.”

Ela is far from the only small-scale farm with a Whole Foods connection. The company’s made a name for itself trying to emulate a farmers market, where you walk inside and find produce from lots of local farms. It’s warm and inviting inside. But its potential new owner, Amazon, has built its reputation on ruthless efficiency, adopting robots in its warehouses and even suggesting drones could be the future of home delivery.

If the two companies merge and he continues selling to Whole Foods, at least a portion of Ela’s fruit would be rolled under Amazon’s corporate umbrella.

With each new city it brings AmazonFresh to, the company continues to invest in relationships among different types of local food producers. In June, the company hosted parties with small and medium-sized food makers in Denver. In an emailed message, it tells invitees Amazon is “seeking new and innovating food merchants in Denver to join us in helping to build the future of grocery shopping.”

There aren’t any signs the e-commerce giant is sourcing directly from local fruit and vegetable growers yet. Neither Whole Foods nor Amazon agreed to a recorded interview. But Amazon spokesperson Nell Rona said in a written statement the company has been talking to farmers.

“We’re continuing to explore and have conversations, but you’ll have to stay tuned for more details” Rona wrote.

Elsewhere in the country Amazon is courting ranchers, hosting a secretive July meeting with grassfed beef producers. When asked about details of the meeting, American Grassfed Association director Carrie Balkcom declined to provide any.

“All attendees signed a NDA [non disclosure agreement], and we can't comment at this time,” Balkcom wrote in an email.

“Grocery is sort of the last flavor of retail to come online in a big way,” Rost says.

News headlines have proclaimed the death of the shopping mall and department store for years as online shopping has nipped away at their profits. The grocery store has remained relatively immune. But those days might be over, Rost says. Amazon’s play will intensify the competition among grocery retailers to figure out online shopping.

“Services like meal kit services and even restaurant delivery services have gotten consumers more comfortable with the idea of buying food online and having it show up in really good condition,” Rost says.

Some packaged food companies are already jumping on board with AmazonFresh. Danielle Merlino is director of sales at Cappello’s, a Denver-based food maker.

“We make a line of pastas, pizzas and cookie doughs that target people who are living a paleo lifestyle, a grain-free lifestyle, clean eaters,” she says.

Cappello’s started selling through AmazonFresh after the service started in Denver this May. Every day an Amazon truck swings by their production facility to pick up orders. It’s gone smoothly so far, but it’s new.

“It’s not a huge sales channel for us, so far. It is picking up but it’s not really any big part of our business right now,” Merlino says.

Amazon will still need to jump a bunch of hurdles, like building and maintaining relationships with farmers, and convincing finicky shoppers they can pick out and deliver good produce, sight unseen.

Then there’s the human element. Fruit grower Steve Ela says food experiences – like picking out produce – aren’t meant to be automated and mediated through a computer. Those moments are best when they’re personal and intimate.

“Value added isn’t just processing and jams. It’s value added by putting in customer service and words and people,” he says. “We see those same people week after week and say ‘How are you today, how’s your son?’ And that’s hard to emulate online.”

Imagine going to the grocery store for dinner, not to pick up a rotisserie chicken to take home, but to actually eat at the store. As online grocery shopping grows, many supermarkets are adding sit-down restaurants in a move to attract more millennials. And it seems to be working.

Amazon has plans to invest in a massive Texas wind farm, according to FuelFix.

The Seattle-based online retail giant is teaming up with Chicago’s Lincoln Clean Energy to build a 250-megawatt wind farm in Scurry County, west of Abilene. The company plans to begin operations in 2017.

The wind farm will feature 100 wind turbines which will power Amazon’s Texas’ facilities, with the leftover energy feeding into the overall state grid.

Amazon will soon begin charging a sales tax in the Sooner State, reports The Oklahoman.

The online retailing behemoth will start collecting the tax beginning on March first. But, unfortunately, those extra collected funds will not go toward easing the burden of Oklahoma’s massive budget shortfall.

That’s because the extra Amazon revenue was already built into Oklahoma’s budget estimates.