HPPR is thrilled to announce that our Kansas News Service reporter, David Condos, won big at this year's national Public Media Journalists Association (PMJA) awards, as well as the regional Edward R. Murrow awards, for his coverage of the Sunflower State.

Here’s the official PMJA announcement of this year's honors, which includes a full list of winning entries from across the country.

David took home FIRST PLACE in the Enterprise category for his series on racism in Kansas: Race in the Free State. That series includes his coverage of the lingering effects of racist violence in Hays and across rural Kansas, discrimination against Black farmers in Nicodemus and two women campaigning to be the first Latinas elected to local office in Liberal and Dodge City.

PMJA describes the Enterprise category as: "A story or series of stories that demonstrates significant journalism that breaks new ground and/or approaches a story from a unique and compelling angle. Enterprise reporting goes deeper than daily reporting, providing fresh perspective, compelling voices, thoughtful analysis and clear and complete treatment of an issue or event."

He also took SECOND PLACE in PMJA's photojournalism category for his photo of Elizabeth Dole at Senator Bob Dole's memorial service in Russell.

David and HPPR competed against small market public radio stations all across the county to bring these national awards home to the High Plains.

So this is a very big deal, as these are HPPR’s first national journalism awards in our 42-year history!

But that’s not all.

This news of these latest accolades comes on the heels of David winning FIRST PLACE honors in three separate categories at the 2022 Regional Edward R. Murrow Awards.

The Murrow Awards are given out every year by the Radio Television Digital News Association (RTDNA), and are among the most prestigious honors in journalism.

His three wins represent the first regional Murrow awards in the 42-year history of High Plains Public Radio, as well!

Hard News
How a Meatpacking Plant Changed One Kansas Town 40 Years Ago, and Left a Colorado Community Behind

Excellence in Diversity, Equity and Inclusion
For his series, Race in the Free State
Part one: What The History Of 'Noose Road' Tells Us About Kansas, Race And The Lynchings Of Black Men
Part two: Federal Payments To Black Kansas Farmers Come Too Late For Generations Who Faced Discrimination
Part three: Even in the most Hispanic cities in Kansas, getting elected as a Latina is an uphill battle

Excellence in Writing
For a collection of three stories
One: How a meatpacking plant changed one Kansas town 40 years ago and left a Colorado community behind
Two: What The History Of 'Noose Road' Tells Us About Kansas, Race And The Lynchings Of Black Men
Three: Farmers Trying To Save The Ogallala Aquifer Face Tension From Peers, But Their Profits Are Improving

David's Murrow-winning stories competed against entries from other public radio stations in Kansas, Missouri, Nebraska and Iowa. And as a regional winner, he will now compete for the national Murrow awards later this summer.

To hear more from David about these honors and his work in western Kansas, click the link at the top of this page to stream his interview with Jenny Inzerillo on High Plains Morning.

Another piece of good news is that nationally syndicated public radio show Science Friday has invited David to join them as a guest this week to talk about his recent reporting on wheat and drought in western Kansas. The segment airs this Friday at 10pm CT on HPPR Connect (94.9 FM in Amarillo) or streaming on our website. (Just hit the player at the top of the screen, as it defaults to HPPR Connect.)

David also produced an audio piece to accompany his local story on this issue, which aired on Kansas News Service stations across the state and led to his guest appearance on KCUR's talk show Up to Date and podcast Kansas City Today. Check that out here.

One last thing worth mentioning is that David’s fabulous story about rural Kansas roadside attractions recently got picked up for national broadcast on NPR's Morning Edition and then re-aired nationally on NPR's Here & Now just this past week. If you missed it on the air, you can stream the NPR version of that story here.

HPPR could not be prouder of David’s contributions to our region, and we offer high-fives and congratulations to him, as well as all the winners for their excellent public media news coverage.

Thank you for all of your hard work and excellent reporting, David — and thanks to all HPPR members who have helped to support his award-winning work! 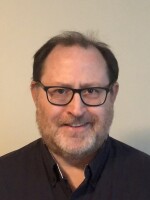 Ken Davis
Born and raised in Champaign, Illinois, Ken hosted his first public radio air shift as a jazz host in September of 1988, leading to a lifetime love of public radio. As program director, Ken oversees the programming and operations in Garden City and Amarillo, joining HPPR in May of 2020 after previously acting as Assistant PD/Operations Manager/On-Air Fundraising Producer at St. Louis Public Radio until 2000.
See stories by Ken Davis