Colorado lawmakers are once again debating a bill to ban so-called conversion therapy for youth in the state. The practice seeks to change a gay or non-straight person's sexual orientation to heterosexual. The American Academy of Child and Adolescent Psychiatry has said the practice does not work, can be harmful, and furthermore, that variations in sexual orientation and gender expression are normal.

To learn more about the efforts to ban conversion therapy for people under age 18, KUNC's Kyra Buckley spoke with Sarah Burgamy, a licensed clinical psychologist in Denver.

Kyra Buckley: More than 10 states have a banned it in some form, and the debate has happened here in Colorado. But how did we get to this point where it needs to go through the legislative process?

Sarah Burgamy: If we don't ban this on the legislative level, then what we're left with is a grievance-based system, meaning somebody would have to experience this, decide it was not okay, and file a grievance against that therapist.

That means the damage is already done. It's already been experienced, and in the case of sexual orientation change efforts, we do have data that shows us that non-affirming interventions, rejection and perception of being rejected on the basis of sexual orientation leads to significantly increased rates of self-harm and suicide risk, especially in young people.

It's by far the single most important variable that can distinguish somebody that would attempt suicide from somebody who would not, at almost a two times rate. It doubles the risk.

Buckley: Do we know if this practice is currently happening in Colorado, if it has happened in the past and what that looks like?

Burgamy: It's definitely happened in the past and I'm going to refrain from mentioning specific organizations. But Colorado had quite a number of places that very publicly promoted the fact that they were engaging in so-called conversion therapy. Colorado has a long history in this arena.

At present, part of the conundrum in difficulty when people say, "Well, is it even happening?" is by nature psychotherapy is an incredibly confidential experience. So it's really difficult to know unless somebody speaks out whether or not they have encountered sexual orientation change efforts, unless they disclose that information, because the practitioner legally may not do so. And the person seeking that may or may not choose to do so.

Burgamy: I haven't run into any pushback from healthcare providers on the whole. Most often what I hear is pushback from people that are saying this shouldn't be banned is — it's an interesting argument — most often people have said this impedes on parental rights.

The first time I heard that, I remember being very taken aback because I didn't understand what exactly they were saying. What I finally understood was they were taking it on face value that somehow sexual orientation change efforts are valid, and if that's the case then people should have the right to access.

The part that's missing from that argument is they're not effective and they're harmful. Therefore, the right of a parent is to seek treatment that, one, works, and two, that takes care and doesn't cause harm. I think I align with people that want to make sure parents' rights are asserted in that I want to make sure parents have the right to accurate information and good practice. And that's not what this (so-called conversion therapy) is. 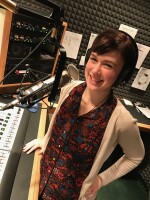