If you weren't able to attend the HOODOO Mural Festival in Amarillo, Texas, DON'T WORRY! HPPR was there, and we'll tell you all about it.

On Saturday, October 1st, I got the chance to attend the HOODOO Mural Festival in downtown Amarillo, Texas. Long story short: I had a blast.

My name is Ly Prescott, and I’m one of the 2022-23 high school interns working at High Plains Public Radio through Amarillo Independent School District and AmTech Career Academy. Recently, I had a the opportunity to act as an onsite reporter for the station at the HOODOO Mural Festival, an art and music festival that hit 5th and Polk in Amarillo on Saturday, October 1st.

The first thing I did when I arrived was to check out some of the murals at and around the event's location. Every large-scale artwork presented an excellent display of the talent and passion of the artists, and together they made for a diverse array of pieces that now decorate our downtown area.

But HOODOO wasn’t just a visual event, so I also made a point to check out the tunes. At the “silent disco,” attendees were invited to a dance party in which the sound is only heard through headphones by those moving to the music, right there in the streets. When I put on my headset, I found that I was particularly fond of the electronic sounds coming from “Channel 1,” created by DJ Mark, while those around me danced to songs no one could hear.

After making the rounds and getting a good grasp of what was around me, I made my way to the main stage to catch the end of the first performance by Amarillo’s own indie rock favorites, Vamping. The songs I heard them perform combined excellent melodies with dreamlike vocals. After the performance, I happened to run into one of my friends! Together, we checked out the food trucks while watching California-based muralist Tristan Eaton work on his piece—which is in the parking lot of the Amarillo National Bank building at 6th and Polk, right next to High Plains Public Radio. (It’s actually facing last year’s cowboy mural on the White & Kirk building, painted by Drew Merritt, who did the saddle image for this year’s festival; it can be seen at 6th and Fillmore.)

Then we headed off to the main stage for the next band: Little Jet. This performance was hard to define, but I will say it was ethereal and upbeat. The projected graphics behind the stage followed that theme, being colorful, lively, and fitting to their name. Finally, I was able to see the one of the spotlighted DJs, Kaelin Ellis, who presented an arrangement of techno and electronic songs. The set was very animated, and the crowd reactions were too. Overall, it was an incredible experience, and I look forward to next years' events. 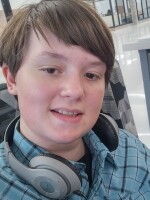