A federal appeals court upheld a Nebraska law which requires picketers to stay 500 feet away from funerals. This is another step in the fight between the courts and the Westboro Baptist Church.

The Topeka-based Westboro Baptist Church protests funerals using anti-gay slur filled signs. The church believes that the U.S. is being punished by God for supporting homosexuality.

The church, which is apparently not affiliated with mainstream Baptist churches, is recognized as a hate group by the Southern Poverty Law Center. Members carry their hate speech well over Kansas borders.

The appeals court ruled that Westboro has a right to free speech at the funeral services, but that "those rights are not absolute and some time, place and/or manner of restrictions are allowed."

The church argued that counter protesters were allowed to get closer than they were but the court said that they failed to prove that claim.

The case will likely be appealed again and may go as high as the U.S. Supreme Court. 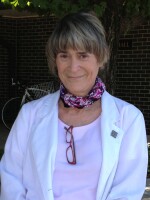 Aileen LeBlanc
Aileen LeBlanc is a journalist, producer and director whose work in television, film and public radio has earned more than 60 regional and national awards.
See stories by Aileen LeBlanc