Many West Texans likely believe that sex trafficking is a big-city problem. Nothing is further from reality. That truth has prompted several Lubbock-area organizations to join forces to fight it. A summit with stakeholders, including survivors of sex trafficking, doctors, experts and law enforcement, will be held Monday through Wednesday next week at First Baptist Church.

“Can we start getting to people to recognize what they’re seeing in front of them is a human trafficking situation. It is a child being sex trafficked and get them to move from a place of, ‘it doesn’t happen here, to it happens here an can we help,” Laura Pratt, the executive director of the nonprofit OneVo!ceHome, says. It’s working toward buying a shelter for those rescued from sex trafficking to have a place to recover from the complex trauma they suffer.

The Lubbock County Medical Society is also part of the effort to battle sex trafficking in and around the city. Dr. Melinda Schalow is reaching out to health care providers whose eyes and ears can help to alert authorities to victims.

“Trying to make protocols so that all of us are more aware of the situation and what to look for and what to do once it’s recognized,” Schalow says. “How do docs help these victims? That’s one of our goals. The other goal is to educate ourselves as physicians and to educate the medical students. So we’re doing presentations in the medical school to first and second year medical students. We’re doing continuing education programs for local doctors here. It’s been well received.”

Kim Stark, the executive director of Voice of Hope, says the numbers of sex trafficking victims are just the people her agency has discovered. The real numbers are likely much higher. Last year’s count was 69 victims, 16 of which were underage. The youngest victim in 2017 was 8. Most of the victims are girls and the majority are Hispanic. A few are African American.

Pratt is grateful the summit is returning for a second year. “To have that kind of knowledge here, at our disposal is incredible,” she says. “Plus there is just something unifying about having events like that.”

Pratt says her group’s has raised about $250,000 dollars. Grant money is available from the Governor’s Office but that can only go toward operational costs. The group has its eyes on Girlstown USA, a property 45 northwest of Lubbock near Whiteface. It’s price tag is $700,000.

Pratt says that since 2013, 214 cases of sex trafficking have been uncovered. Fifty-four were minors, and the youngest was 6. The crime is vastly underreported. The ordeal for victims is unfathomable, she says. Selling humans is far more heinous than what dealers of illegal drugs or guns do, Pratt says.

“You can put a poor girl on the internet and sell her 20-30 times, in one day and she’s still yours. These men will even call them their property. Like I own her,” she says.

Schalow hopes the community gets behind the efforts to stop sex trafficking to send a message to those who trade in human beings.

“We really need to make efforts to make this a place where Lubbock is a safe place for our children and a very user unfriendly place for buyers and sellers of our children,” she says.

Pratt believes in how Lubbock can show that to the criminals, while also sending a message to victims. She says: “Victims, survivors, you come here and you get a place of refuge. We’re a place of healing.” 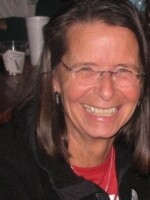 Betsy Blaney
Betsy Blaney is a radio producer at Texas Tech Public Media, following a 25-year career in print journalism. Most recently, she was the West Texas solo correspondent for The Associated Press, based in Lubbock for more than 16 years and covering 65 counties in the region.
See stories by Betsy Blaney