Even In Windy Kansas, Coal And Gas Still Necessary Sources Of Energy

Environmental regulations and commitments to address global warming are certainly not on terra firma. The Trump administration has vowed to ease emissions controls for power plants and to get coal miners back to work.

The Jeffrey Energy Center, in St. Mary’s, Kansas, near Topeka, is one such coal-fired power plant.

The plant’s guts are mainly outside on a series of decks; the top deck is 280 feet up and there’s an open grate to look below. 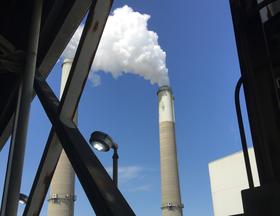 From there, you have a good view of the three stacks spewing their cloud-like steam into the sky. (Don’t call it smoke—it’s steam.)

Beyond the stacks on the ground out back is the coalfield. It goes on, and on, and the big open-topped railroad cars are standing still on the tracks. They seem almost like a model train set, waiting for their giant child to come back and play.

Right now, there’s about 74 days’ worth of coal supply, if the plant runs all of its units at full load, 24 hours a day, 7 days a week.

But they don’t run the three units 24/7. And the answer for that is in the wind.

The Jeffrey plant went online in 1978 and since then has almost doubled in size--not because it puts out more power, but because there are huge pollution control units hanging near the turbines. They scrub the air clean (or cleaner) from the coal, which burns to heat the water to make the steam to turn the turbines to make, finally, electricity.

But coal is a fossil fuel, and it has become a bad word in environmental discussions about carbon emissions and global warming. 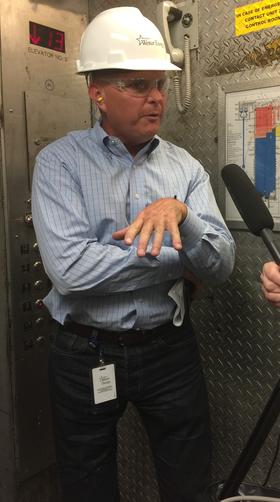 During the Obama administration the Environmental Protection Agency introduced the Clean Power Plan, with regulations designed to further reduce pollution 32 percent by 2030. States and utilities objected, and in March the Trump team basically pulled the plan.

“Westar had to come into compliance with a variety of rules prior to the Clean Power Plan even coming out in its proposed form,” says John Bridson, senior vice president of Generation and Power Marketing at Westar, Kansas’ largest energy company. “In fact, we’ve invested about $1.8 billion over the last decade in new equipment that’s been added to these fossil plants to meet limitations under the various rules."

So Westar, seeing state mandates about renewable fuels, started building wind turbines and filling wind farms with them to get a leg up. And wind is subsidized.

“What we’ve added for wind generation lately has been more about what’s most economic for our customers than it has been about meeting any mandates or regulation," Bridson says.

And Bridson says he can’t see Westar going back, regardless of any deregulation on emissions or the promise of new jobs for coal miners. Building a new coal plant is, for now, not part of the Westar plan.

“Not at this point in time. It’s hard to imagine we would ever make that decision. Not until some technology changes," Bridson says. "Westar made enough investments in renewable power that we far exceed the carbon reductions that the Clean Power Plan sought to get from the country’s electricity producers.”

Bridson says that Westar’s 700,000 customers get almost a third of their power from wind and solar--mostly wind. Including nuclear power, they get 50 percent of their power emissions free.

But what happens when the sun doesn’t shine and the wind doesn’t blow?

When they are, the coal plants cycle down and allows the wind turbines to provide the load. But when it’s dark and still, the Jeffrey plant kicks back up to keep the energy availability at the level that the customers need. 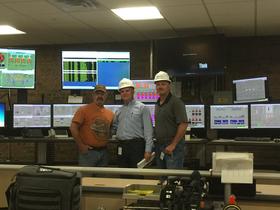 The plant is constantly monitored by a network of metering, which helps to decide who on the southwest power pool grid needs what, and when.

But there are a couple of giant hang-ups to going more and more green, even in windy Kansas. The grid is not totally interconnected, and Westar can’t store the energy and tap into it later.

"That's really the Holy Grail in the electrical industry is to figure out how to store power cost effectively," Bridson says. "Once we do that, then you can move toward a world that really is 100 percent renewable, but until then we’re always going to need dispatchable resources like coal-fired or gas-fired plants."

Study: coal-fired plants are on their way out, regardless of party in power

Despite Republican efforts to bring back coal as a fuel source, a new report by the Brookings Institution says coal-fired power plants will continue to close despite the arrival of the Trump administration.

As The Rural Blog reports, climate-change deniers such as Oklahoma Attorney General Scott Pruitt--who has been tapped to head the EPA--have been vehemently opposed to the Obama administration’s Clean Power Plan. They’ve vowed to end what they call the “war on coal.”

Oklahoma’s budget gap next year could amount to well over half a billion dollars.

To plug the hole, lawmakers in Oklahoma City are discussing selling some of the state’s power plants.

As StateImpact Oklahoma reports, the Sooner State has considered the idea of selling the Grand River Dam Authority to make up for the budget shortfall. The plan would involve selling some of Oklahoma’s hydroelectric dams, as well as a coal-fired plant.

Federal Ruling Could Have Major Consequences for Oklahoma Energy Policy

Oklahoma is one of several states challenging President Barack Obama's plan that would force coal plants to reduce emissions,

Nebraska’s solar power generation has increased from around one megawatt at the start of 2016 to over 13 megawatts by mid-2017.

That is what David Bracht of the Nebraska Energy Office recently told NET Nebraska.

While winds were blamed for spreading wildfires that raged across parts of the High Plains in early March, they are also being credited with boosting wind power’s share in High Plains states, including Colorado.

As The Denver Post reports, solar and wind power for the first time accounted for 10 percent of a month’s electricity generated in the U.S.

Five states, including Kansas, get at least 20 percent of their electricity needs from wind, but as The New York Times reports, alternative energy investments like wind and solar power have not performed well in recent years.

To make matters worse, the Trump administration has opted for a resurgence of coal and other carbon fuels, not an emphasis on alternative energy.

Colorado and Texas each rank in the top 10 un the nation as hubs of solar energy employment.

As The Denver Post reports, Colorado’s solar companies added more than 1,000 workers last year, according to the National Solar Jobs Census, allowing the state to maintain its top-10 ranking as a hub of solar energy employment.

Colorado could take center stage on the topic of climate change under a Donald Trump Environmental Protection Agency.