Hitting The Open Road: Travel Nursing Catches On With Millennials

Emergency room nurse Nathan Craft and his wife Annie don’t expect anything to be easy as they pull up stakes for the next two years. The RV they remodeled will be tight quarters for them and their two preschool-age kids. And there’s a certain amount of stress in not knowing where they’re going to set down next.

But like a growing number of nurses, the Crafts are answering the call of the open road. For them and others, the lifestyle and opportunity for higher pay as a traveling nurse outweighs the inconveniences of uprooting their lives for a new job every three months.

A little noticed sub-niche of the healthcare industry, travel nursing seems to be catching on with millennials and younger baby boomers who, like the Crafts, want a change of scenery and a chance to make more money. It’s just another way the gig economy has become at least a partial solution to a workforce problem – in this case, the demand for nurses exceeding the supply.

Travel nurses typically sign on with agencies that place them in short-term assignments. The usual posting is for 13 weeks, but employers can ask for a second stint if they still need the help. If that doesn’t happen, the nurse will start looking for a new assignment toward the end of the contract.

For nurses, the expense and uncertainty is balanced out by the higher pay, some of which is tax free, according to John Nolan, a partner and vice president of Heartland Healthcare Providers, an agency based in Kansas City. 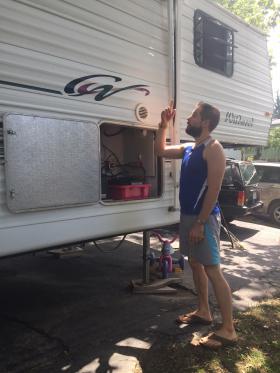 It’s also part of what motivates Nate Craft. He began to meet travel nurses during his first couple of years in various jobs at TMC Lakewood and Research Medical Center. The longer he worked, the more friends he encountered who were taking their nursing degrees on the road, he said.

“I worked with countless travel nurses who told me stories about going around the country and it kind of dawned on me that we could do that,” Nate said. “There’s a very large financial incentive. The flexibility you have to endure to uproot yourself and work that short period of time and also not receive health care and benefits (are) offset by paying you a larger hourly wage.”

For hospitals, the advantage is in getting nurses on board for brief fluctuations in their patient loads.

“When they have staffing needs where they need someone who is very good at their job to come in very quickly and immediately be able to take patient loads and they’re not sure if that is going to be a long-term need or not, they normally contract that out to an agency,” Nolan said.

Travel nurses can make a lot more money than staff nurses – sometimes almost double, Nolan said. Even so, it’s less expensive for the hospital than all the training and lead time that goes into creating a permanent position, he said. Of course, that means when a hospital has a peak load during vacation or flu season, there’s no guarantee the jobs will last.

“When things slow down and you have to fire them six months later because you don’t have the work, that’s a good way to get a bad reputation,” Nolan said. “Nurses won’t want to work at your hospital.”

And that matters when there’s a shortage of nurses. Aging baby boomer patients, a high nurse burnout rate and the fact that about a million registered nurses are approaching retirement have all contributed to the shortage. According to the U.S. Bureau of Labor Statistics, 1.1 million more nurses will be needed by 2022 to avoid an even greater problem.

Travel nursing still makes up a tiny percentage of the nursing workforce, but it’s growing. According to researchers Staffing Industry Analysts, the market size of travel nursing is at an all-time high. Growth has fluctuated. Now that that the population of newly insured under the Affordable Care Act is leveling off, the annual growth rate has slowed but is still around 7 percent, according to an SIA report.

Part of that growth may be due to the omnipresence of the gig economy. There’s no longer much of a stigma about being a short-term employee, said Cynthia Kinnas of the Traveler’s Education Group, a non-profit organization of traveling nurses known for its annual Traveler’s Conference.

“It’s become more widely accepted, she said. “In the old days people looked down on a temp.”

Traveling nurse agencies have taken steps to erase the temp stereotype. Most require one or two years of nursing experience before signing on a nurse, and that’s a minimum. At Heartland, the nurses must meet extra criteria “to make sure they actually know what they’re doing so we don’t have anyone fall through the cracks who gets in and makes a big mistake,” Nolan said. “So we put them through some pretty rigorous hours of competency testing to make sure they know how to read heart rhythms and administer pharmacological agents.”

Some hospitals have a lot of spots for traveling nurses and some not at all. HCA Midwest Health, whose network includes Research Medical Center, Menorah Medical Center and Overland Park Regional Medical Center, has its own traveling float pool at the ready to cover emergency situations like hurricanes and floods. But like some other local hospitals, it likes to keep things within the corporation so that even temporary staff know the hospital’s culture and protocols, said HCA spokeswoman Christine Hamele.

University of Kansas Health Systems prefers regular full-time and part-time staff, so it doesn’t usually use travel nurses. And at North Kansas City Hospital, less than 1 percent of the nursing staff are traveling nurses.

But traveling has an appeal to nurses who don’t want to deal with the politics involved in long-term employment, or who need the change of scenery to prevent burnout.

“Nursing is a high burnout profession. That’s one of the reasons for the shortage,” Kinnas said. “I’ve had people tell me, ‘If I didn’t have this option I wouldn’t be nursing anymore,’” she said.

The idea is particularly appealing to nurses at the younger and older ends of the spectrum. Nurses in their 40s and 50s who don’t have kids at home may be trying to pay off college debt or increase their retirement savings, Nolan said. “What we don’t get are the late 30s, early 40s people starting families that have children at home” and need the stability, he said.

For Nate and Annie Craft, travel is in their DNA. Nate graduated with a degree in graphic design but didn’t particularly take to the profession once he left school. Having done two tours of duty in Iraq and a bunch of odd jobs, Nate decided to take a two-year multi-country backpacking trip. Just before leaving, he met Annie.

Annie, also an art major was an EMT before staying home with their kids. After their kids were born, money became more of an issue. Annie wanted to stay home with Reo, 4 and Parker, 3.

The idea of living in a trailer didn’t appeal much at first, but “once I had Parker, I think I really realized how limited our money was,” she said. “So it kind of dawned on me that this was the easiest way and the best way to get to show my kids the world without being able to have as much money as it would take to fly.”

The Crafts found an 18-year-old RV with water damage for $3,000 on Craigslist, “so we snapped it up pretty quick,” Nate said. They’ve been working almost a year to make it suitable for full-time living, with reclaimed lumber and water and energy-conserving appliances.  Their split-level house is now on the market, and they’re living in the RV at another location.

They’re giving it two years – enough time to explore eight different locations, “the idea being that we can try out all these places we may want to settle down in,” said Nate. “We’re very outdoorsy. We’d really love to settle down in a town that’s outdoorsy that allows us to be inside a national park within an hour. We like to rock climb, mountain bike, we like to canoe with the girls. So Colorado, Oregon and Tennessee are big spots we want to try out.”

They’re a little unsure of how it will all work out financially. The plan is to boondock – the cheapest way to travel with an RV because there are no water or sewer hookups to pay for. The trailer is outfitted with that in mind, they said. That will make the housing stipend go farther.

Health insurance costs are a question mark as well. Often, travelers have a spouse with insurance benefits and don’t need to provide their own, said Nolan. But if that’s not available, health insurance can eat into some of that higher pay. Some agencies offer health insurance packages for their travelers, but Nate and Annie expect they’ll enroll through the ACA exchange once he leaves.

“There are just so many different variables,” said Annie. “So I don’t know if we’re just going to break even. But no matter what, we’re going for the experience. If he likes it, that’s great. If he doesn’t, then we’re back home – wherever we make our home.”

Roxie Hammill is a freelance writer who lives in Lenexa. You can reach her on Twitter at @roxiehammill.

The system of small hospitals that provides emergency and other health care to millions of rural Texans is in trouble. As many as 18 rural hospitals in Texas have closed since 2013, and many more may be on the verge. These closures can devastate local economies and leave some of the most vulnerable Texans with few health care options.

The Nebraska Department of Insurance wants to hear your questions and concerns, so once again they are holding listening sessions throughout the state beginning the first week of October.

Texas and Oklahoma were among non-Medicaid expansion states with the highest rates of uninsured adults, especially those living in rural areas. Meanwhile, that rate in Kansas and Nebraska were among the lowest.

Kansans seeking health insurance through the Affordable Care Act’s federally run exchange will have the choice of three insurers in 2019.