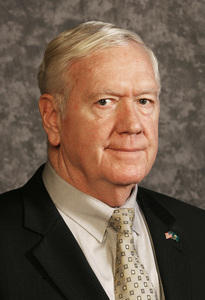 Sen. Steve Fitzgerald, Republican of Leavenworth, on Monday told KCUR he saw nothing wrong with the comparison, which he first made in a letter to Planned Parenthood after a woman made a donation to the organization in his name.

Sen. Fitzgerald did NOT appreciate having a donation to @PPGreatPlains made in his honor. Just FYI. https://t.co/raCPC9b3nX #ksleg #heinous pic.twitter.com/D5AbOgRfLM— PP Great Plains KS (@PPGreatPlainsKS) March 10, 2017

“They’re killing more people,” Fitzgerald said in a phone interview. “They’re more insidious. The Nazis had the good grace to call them ‘Untermensch,’ less than human. These people admit that the victims are human and, so what? They kill them anyway.”

Fitzgerald touched off a media tempest with his letter to Planned Parenthood, which the organization publicized in its tweet over the weekend.

The woman whose donation prompted the letter, Prairie Village resident Ali Weinel, told KCUR she made the donation because Fitzgerald was a sponsor of Senate Bill No. 98, which imposes various requirements on abortion providers.

Weinel said she emailed Fitzgerald and told him that lawmakers “should focus on making sure that Kansas schools would open on time” – a reference to a school funding imbroglio that threatened the opening of public schools this fall. (The Kansas Supreme Court earlier this month ruled that the school funding formula was unconstitutional.)

“And I reminded him that I’m their boss, the people are their boss,” Weinel said. “I guess he didn’t like that, because he emailed me back saying killing children is always a bad idea.”

Weinel said she emailed Fitzgerald thanking him for his opinion and saying “please let me know the next time you become pregnant, which he did not like. So I told him that I just didn’t think he should speak to citizens this way, just that I didn’t think it was right.”

Weidel said the exchange frustrated her to the point that she decided to make her first donation ever to Planned Parenthood – and in Fitzgerald’s name.

“I’m a millennial; I’m in my 20s, I usually donate my time and talent,” she said. “ … I haven’t ever utilized their services, but just thought this would be a fitting time to donate to them.”

Fitzgerald was first elected to the Kansas Senate in 2012. Now retired, he was a trainer for aerospace company Northrop Grumman. In the 2016 election, he was endorsed by the Kansans for Life political action committee.

In his interview with KCUR, Fitzgerald said he favored cutting off funding for Planned Parenthood, “retroactively, if possible.”

“And Hitler did a great job for the autobahn, too,” Fitzgerald added. “So, you know, c’mon, killing people equals killing people. That’s my statement and I’m staying with it.”

“This is, once again, an extreme example of the ideology of one legislator who is now not only doubling down but quadrupling down on his inappropriate comments,” she said in a phone interview. “And it is not the will of the majority.”

“So this kind of rhetoric is just unacceptable and is furthering the shame and stigma of safe legal abortion that Planned Parenthood Great Plains is proud to offer in the state of Kansas,” she said.

Dan Margolies is KCUR’s health editor. You can reach him on Twitter @DanMargolies.

Controversial Oklahoma bill would require a male's consent for abortion

Yesterday the Oklahoma legislature brought a bill to the floor that would make abortions illegal unless approved by the mother’s male sexual partner.

In his ruling Friday, Sparks wrote that the Texas Department of State Health rule’s vagueness, undue burden and potential for irreparable harm were factors in his decision.

The Kansas Supreme Court is facing a docket of major rulings in 2017.