Kansas, a state that went for President Donald Trump by 20 points two years ago, on Tuesday turned one of its four Republican seats in Congress to Democrat.

Another political newcomer, Steve Watkins, was elected to replace fellow Republican U.S. Rep. Lynn Jenkins in the 2nd Congressional District that covers most of the eastern third of the state. He edged out Democrat and former Kansas House leader Paul Davis.

Davids became one of the few Native Americans, and perhaps the first American Indian woman, elected to Congress. 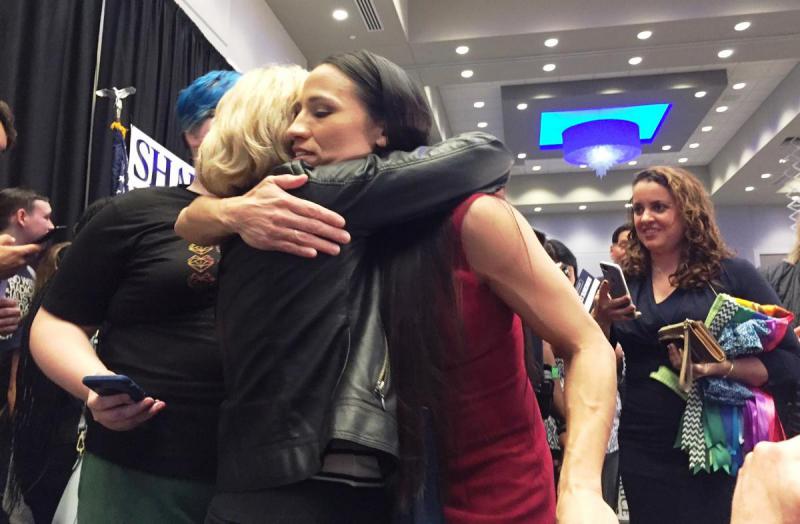 Davids and Yoder clashed over immigration, as much as anything .

Davids was criticized early in the contest for a podcast appearance where she seemed to call for the abolition of U.S. Immigration and Customs Enforcement. She later walked that back, insisting only that the agency needed reform.

Likewise, Yoder vastly overstated the number of immigrants filing false claims in seeking asylum. He also waffled at times on various immigration issues — at one point this year siding with Democrats on asylum issues, then later joining ranks with the Trump administration.

The two also differed sharply on health care issues. Yoder voted with other Republicans time and again in opposition to the Affordable Care Act, commonly known as Obamacare. For a time, that served him well in his Republican-leaning district. But after Trump took office, Obamacare became increasingly popular. Davids made it a centerpiece of her campaign.

At the Davids party, the room was boisterous when the cable networks began calling the race for her, another seat shifting to Democrats in their hopes of wresting control of the House from Republicans. They did.

“We have a chance to re-set expectations when people look at Kansas,” Davids said to a room full of cheering supporters. “I knew we could do better, and we just did.”

“From the beginning,” Davids told supporters Tuesday night,  “this campaign has been built on bringing new leaders to the table and new voices to the table.”

Across town, the Yoder party began to thin out early, many supporters uninspired by never-say-die backers of the incumbent and a band playing “Lukenbach, Texas.” Yoder had won the seat four times, always by fairly comfortable margins.

Yoder wished Davids good luck and called for unity but said the raise-money-and-run-again merry-go-round of American politics is a problem.

“This perpetual campaign cycle must close,” he said.

The district is again returning to Democratic hands. Dennis Moore served several terms before retiring amid mounting health problems and his wife later lost to Yoder.

Watkins emerged from a crowded and bruising primary, where his opponents directed criticism at him that was uncharacteristic of attacks within a party.

But he brought an impressive resume to the race. Watkins is a West Point graduate and combat veteran of Iraq and Afghanistan. His campaign stumbled in the general election when reporters discovered that he exaggerated, or invented, business and philanthropic accomplishments.

Davis appeared to be a formidable opponent. While he’d lost a bid for governor in 2014, he won within the 2nd District. But that was a race for state office, where Kansans are far more willing to vote for Democrats. In federal races, Republicans tend to enjoy an advantage.

Watkins gave the usual round of thanks for family and campaign workers, but the congressman-elect also mentioned those he’d known in the military academy and in combat. They, he suggested, would appreciate another victory in life.

“I’ve lived to fight another day,” he said.

Davis said Tuesday’s loss marked the end of his political career. He chose to look at Kelly’s victory as the silver lining to his cloudy day. 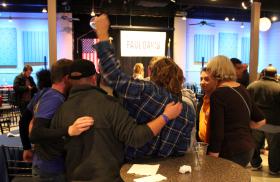 “We have something to celebrate tonight,” he said. “It’s time for me to turn a page in the next chapter of my life. But I’m not going to back away from the things that I believe in.”

Scott Canon is digital editor of the Kansas News Service, a collaboration of KCUR, Kansas Public Radio, KMUW and High Plains Public Radio covering health, education and politics. You can reach him on Twitter @ScottCanon.

Six months ago, very few people in the Kansas 3rd Congressional District even knew Sharice Davids’ name. Now she has made history. Davids is the first openly gay representative in Kansas history. She joins Deb Haaland from New Mexico as the first Native American women in the House.

"We have a chance to reset expectations when people look at Kansas," Davids said to a room full of cheering supporters. "I knew we could do better and we just did."

The day after the 2018 midterm elections, two political science professors join us to talk about who turned out to vote, and how that affected the outcomes. The discussion includes high turnout for young voters, changing rural demographics in Kansas and Missouri, the importance of identity for voters and candidates, and whether Kansas just turned blue as some are claiming, or not.