For Latino Patients, Having A Shared Identity With A Doctor Can Strengthen Trust

Andrea Hernandez ended up in a McAllen hospital after a drunken driver hit the car she was in.

“I basically got amnesia because of how hard I hit my head,” the 22-year-old says.

Like many families in Texas, Hernandez’s family is from Mexico. Her father speaks only Spanish, so she says it was valuable that her doctor was from Mexico and spoke Spanish, too.

Even with the growth of the Latino population here, the ratio of Latino doctors to Latino patients remains low. Medical schools are working to address this issue of diversity, because a shared identity between a doctor and patient can be especially important when treating a patient in an emergency.

“Since I couldn't remember what had happened, it was very important for me that my dad was able to tell the doctor what was going on,” Hernandez says.

She says her father was comfortable with the doctor.

“I know he was very happy that the doctor was able to understand him,” Hernandez says. “There was no barrier for my dad to really express what had happened or what my dad expected of my care.”

But Hernandez’s experience is unique. A 2010 study by Dr. Gloria Sanchez found there were 78 Latino doctors for every 100,000 Latinos in Texas – 75 percent less than the rate for non-Hispanic whites. 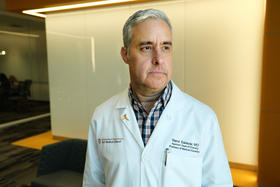 One reason there aren't many Latino doctors is that young Latinos face some barriers at the beginning, when they apply to medical school, says Rene Salazar, the assistant dean for diversity at Dell Medical School in Austin.

“As a first-generation college student and as the first in my family to go [into] medicine, not seeing individuals that looked like me … really got in the way of me thinking that this was a possibility,” he says.

Salazar says when he speaks at events, many Latino students tell him he’s the first Latino doctor they’ve seen, despite the large Latino population in Texas.

“That's just not acceptable to me,” he says, “especially when, again, we’re more than a third of the community.”

Latino doctors have cultural experiences that allow them to help their communities differently than non-Latino doctors, Salazar says.

“It’s an understanding of the culture and experience that I think can put us in a space to really help our patients be more effective in managing their health,” Salazar says.

“The richness of our experience not only helps our communities, our Latino communities, but it also helps our peers who are not Latino understand and increase their cultural competence as well,” she says.

Salazar says there are benefits to a shared identity between doctors and patients that aren’t just about better care.

“We have to be careful [not] to jump to the conclusion that Latino doctors take better care of Latino patients,” he says.

This shared identity matters most when it comes to patient satisfaction, he says.

Now recovered, Hernandez is studying to become a doctor at UT Health in Houston. She says the experience between her father and her doctor has solidified her decision to help others.

“I saw how comfortable my dad was and I saw how that led to better care for me,” she says, “so I would like to do that for other Latinos as well.”

When it comes to the Latino block of the electorate, you’ve probably heard politicians and analysts describe it this way.

With less than two weeks of open enrollment left, Austin nonprofit Foundation Communities says it's reporting a noticeable decline in the number of Latinos signing up for health insurance through healthcare.gov, the federal insurance marketplace created by the Affordable Care Act.

Oklahoma Ranks Near The Bottom In Child Health Insurance Rate

After a decade of improvement, a new study suggests the rate of uninsured children is increasing in Oklahoma.