During a Friday visit to Junction City that included a stop at a food pantry site, U.S. Rep. Roger Marshall said he would work to maintain funding for programs that feed the hungry.

Marshall represents Kansas’ 1st District, which includes two counties — Geary and Riley — with the state’s highest rates of food insecurity. Residents of those counties also are more likely than most people across the country to lack reliable access to affordable, nutritious food.

The freshman congressman serves on the House Agriculture Committee, which helps write the Farm Bill — the vehicle for the federal school lunch program and the Supplemental Nutrition Assistance Program, formerly known as food stamps, that could face cuts under President Donald Trump’s proposed budget.

While Marshall said he would fight to preserve funding for food programs in the Farm Bill, he warned that even keeping current funding levels would be difficult.

At a town hall meeting during Marshall’s visit to Junction City, he faced questions from Miranda Klugesherz, chair of the local food policy council, who took Marshall to task for comments he made last month about expanding access to health care through Medicaid.

In an interview with STAT, Marshall said some low-income people “do probably the least preventive medicine and taking care of themselves and eating healthy and exercising. And I’m not judging, I’m just saying socially that’s where they are.”

Klugesherz told Marshall that food stamps and cash assistance from the government made a positive difference in her life.

“I probably wouldn’t be standing in front of you today had I not had them,” she said.

People who receive government assistance repeatedly hear that they are poor by choice, Klugesherz said.

“If these people do not have food, they cannot possibly dig themselves out of any other hole,” she said as she fought back tears. “This comment hurts me to my core. And it undoes what so many in this community are trying to do.”

Klugesherz asked Marshall what he plans to do make sure that kind of rhetoric is no longer used. 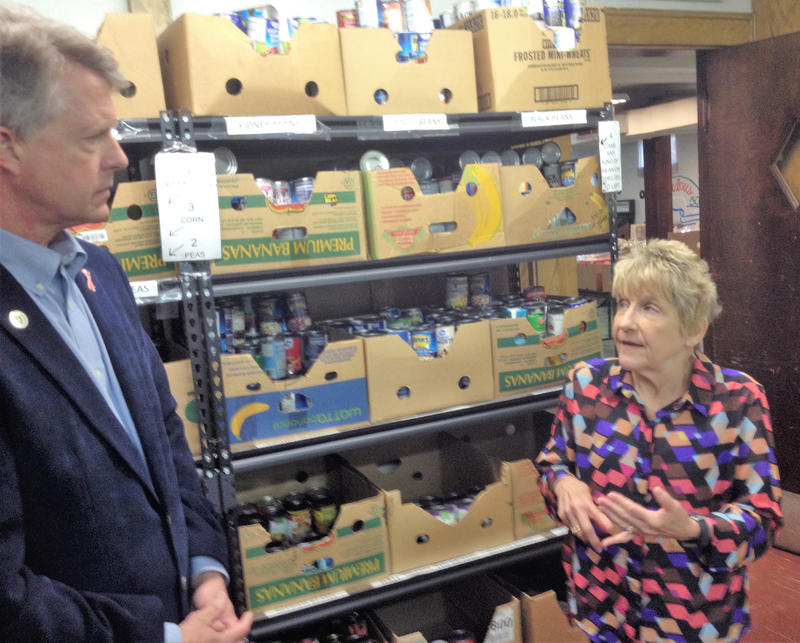 Marshall said his comments in the article were taken out of context. He said he was trying to explain, while talking about Medicaid, that physicians and hospitals have an obligation to care for the poor.

“It kills me, too, to see how that was misconstrued,” said Marshall, an obstetrician. “If you knew anything about me, I never turned away a Medicaid OB patient in 25 years. I was the only OB doctor within 80 miles taking Medicaid patients.”

After the town hall meeting, Marshall visited a nearby church that serves as the hub for a mobile food pantry.

Marshall said when he began his campaign for Congress, he thought that it was parents’ obligation — not the government’s — to feed their children. However, he said his eyes have been opened by seeing the number of preschool children who are hungry.

“It’s not their fault, and you know my bigger concern is that if they don’t get proper nutrition — especially at those young ages — whatever their potential could have been will never be realized,” Marshall said. “So, I think we need to give every kid that we can a chance. … My job is to make sure these programs are as efficient as possible.”

Bryan Thompson is a reporter for the Kansas News Service, a collaboration covering health, education and politics across the state. Follow him on Twitter @KSNewsBryan. Kansas News Service stories and photos may be republished at no cost with proper attribution and a link back to kcur.org.

The food bank is asking for money to prevent a $300,000 summertime shortfall. The bank is traditionally known for collecting cans. But this summer they’re asking for monetary donations.

The food bank is asking for money to prevent a $300,000 summertime shortfall. The bank is traditionally known for collecting cans. But this summer they’re asking for monetary donations.

From the Kansas Health Institute: