Republican Ted Cruz leads Democrat Beto O’Rourke 51 percent to 45 percent in the Texas race for the U.S. Senate, according to the latest University of Texas/Texas Tribune Poll. Libertarian Neal Dikeman was the choice of 2 percent of likely voters and another 2 percent said they would vote for someone else.

Democratic and Republican voters, as might be expected, lined up strongly behind their respective party’s candidates. But independent voters, a group that often leans to the Republicans in statewide elections, broke for O’Rourke, 51 percent to Cruz’s 39 percent.

“The major Senate candidates were trying to mobilize their partisans, without a lot of attempt to get voters to cross over. And it looks like they’ve done that,” said Jim Henson, co-director of the poll and head of the Texas Politics Project at the University of Texas at Austin. “If you look for Republican defections to Beto O’Rourke, they’re not there. But the independents break to the Democrat instead of the Republican in that race.”

The poll of likely Texas voters was conducted before early voting in the general election began this week.

In several other races for statewide office, Republicans hold double-digit leads over their Democratic opponents.

Gov. Greg Abbott maintains a comfortable 19-percentage point lead over Democratic challenger Lupe Valdez, with 56 percent backing him to her 37 percent. Mark Tippetts, a Libertarian, attracted 3 percent support and 4 percent said they would vote for someone else.

In that race, independent voters lined up with Abbott, 59 percent to 30 percent. And Valdez’s support among Democrats, while strong, didn’t match O’Rourke’s. Where the Senate candidate had 94 percent of Democrats behind him, 82 percent of Democrats said they would vote for the party’s gubernatorial candidate.

Attorney General Ken Paxton’s race is slightly closer; he leads Democrat Justin Nelson by 12 percentage points, 48 percent to 36 percent. Michael Ray Harris, the Libertarian in that contest, got 6 percent, and 10 percent said they would vote for someone else.

“Abbott does better than other Republicans with Hispanic voters — even running against a Latina,” said Josh Blank, manager of polling and research for the Texas Politics Project at UT. Valdez had the support of 52 percent of Hispanics to Abbott’s 39 percent. Compare that with O’Rourke at 60 percent to Cruz’s 33 percent; Collier’s 44 percent to Patrick’s 40 percent; and Nelson’s 44 percent to Paxton’s 30 percent.

“For every other race, the independents are in the Republican column,” Blank said. “Also, the other Democrats in the poll do not have the same level of support from Democratic voters that O’Rourke has.” He added that, “In the end, most of the Democrats voting for O’Rourke are going to vote for Valdez, Collier and Nelson.”

A handful of the state’s races for Congress have been very competitive this year; a “generic ballot” for congressional races suggests the reason for that. Asked which party’s candidates they would support in a race for Congress, 54 percent picked the unnamed Republican and 46 percent picked the unnamed Democrat. That 8-percentage-point difference is smaller than the results in most of the statewide races

Voter impressions of the candidates reveal some shifts since the last UT/TT Poll in June. Cruz gets favorable marks from 51 percent of likely voters and unfavorable marks from 44 percent. He’s improved his standing with Republicans to 86 percent favorable from 77 percent in June.

More importantly, his race to define his leading opponent to voters before O’Rourke could do it himself has paid dividends. In the June UT/TT Poll, 49 percent of Republicans said they had no opinion of O’Rourke; in the latest survey, that had dropped to 9 percent. Now, 83 percent of Republican voters said they have an unfavorable opinion of Cruz’s challenger — up from 42 percent at the beginning of the summer.

Overall, 44 percent of likely voters have a favorable impression of O’Rourke, while 49 percent said they have an unfavorable one. 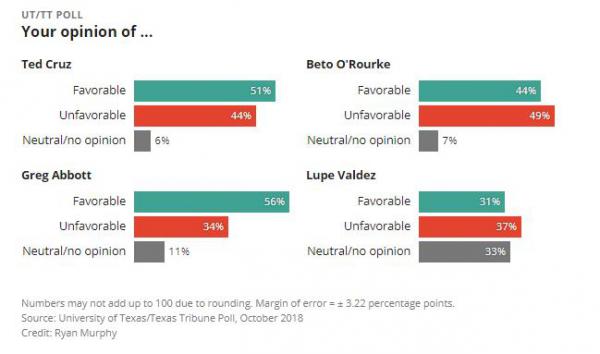 In the governor’s race, Abbott is viewed positively by 56 percent of likely voters and negatively by 34 percent — healthy numbers for an incumbent. Valdez has had difficulties breaking through: 31 percent of voters have a positive opinion of her and 37 percent have a negative opinion. But while only 11 percent of voters had a neutral or no opinion of Abbott, three times as many had no impression of Valdez. She hasn’t left an impression on a third of the Texans likely to vote in this election.

Ask voters about the work being done by public officials and Texas politicians do better than their national colleagues. President Donald Trump’s numbers have held steady in Texas, where 48 percent of all voters give him good marks and 45 percent give him bad ones. For U.S. Sen. John Cornyn, the ratings were 39 percent positive and 34 percent negative, and for Cruz, they were 47 percent to 42 percent. 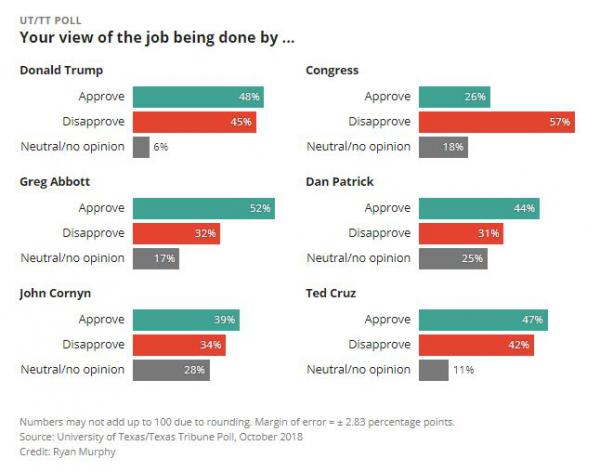 That probably explains the results when voters were asked which branch of the federal government they most trust: Congress got 8 percent of that vote, while the executive and judicial branches each got 29 percent. The remaining 35 percent didn’t choose any of the three.

At the state level, Abbott got good marks from 52 percent of voters and bad ones from 32 percent. For Patrick, it was 44 percent good and 31 percent bad.

The University of Texas/Texas Tribune internet survey of 1,200 registered voters was conducted from October 15 to October 21 and has an overall margin of error of +/- 2.83 percentage points. The likely voter sample of 927 voters has a margin of error of +/- 3.22 percentage points. Numbers in charts might not add up to 100 percent because of rounding.

The University of Texas has been a financial supporter of The Texas Tribune, a nonprofit, nonpartisan news organization that is funded in part by donations from members, foundations and corporate sponsors. Financial supporters play no role in the Tribune's journalism. Find a complete list of them here.

This article originally appeared in The Texas Tribune.

More than $100 million has now been raised for the U.S. Senate race in Texas.

HOUSTON — President Donald Trump, speaking Monday evening here at an uproarious rally, cast his 2016 battle with U.S. Sen. Ted Cruz as a thing of the past and blasted Cruz’s Democratic challenger, Beto O’Rourke, as a “stone cold phony.”

When Texas Tribune reporter Alana Rocha asked U.S. Sen. Ted Cruz, R-Texas, last month whether he'd serve a full six-year Senate term if he defeats Democrat Beto O'Rourke in November, Cruz gave a two-minute reply — but didn't answer the question. O'Rourke, meanwhile, said he would serve a full term if he eked out a win over the incumbent.

But in an interview with ABC News over the weekend, Cruz gave a far firmer answer, saying he "absolutely" would serve a full Senate term if re-elected.