A Hands-On Look At Gene-Editing Technique CRISPR, Which Could Be A Game-Changer For Ag

In a lab at George Washington University, painted lady butterflies flutter in mesh houses. This is where assistant professor Arnault Martin and his research group use the new gene-editing technique CRISPR to unlock secrets about the colors and spots on the butterflies’ wings.

CRISPR has allowed them to isolate a precise gene that controls wing appearance, and they can shut it off at will.

Listen
Listening...
/
Harvest Public Media's Amy Mayer gets behind the microscope to test out the gene-editing technique CRISPR. 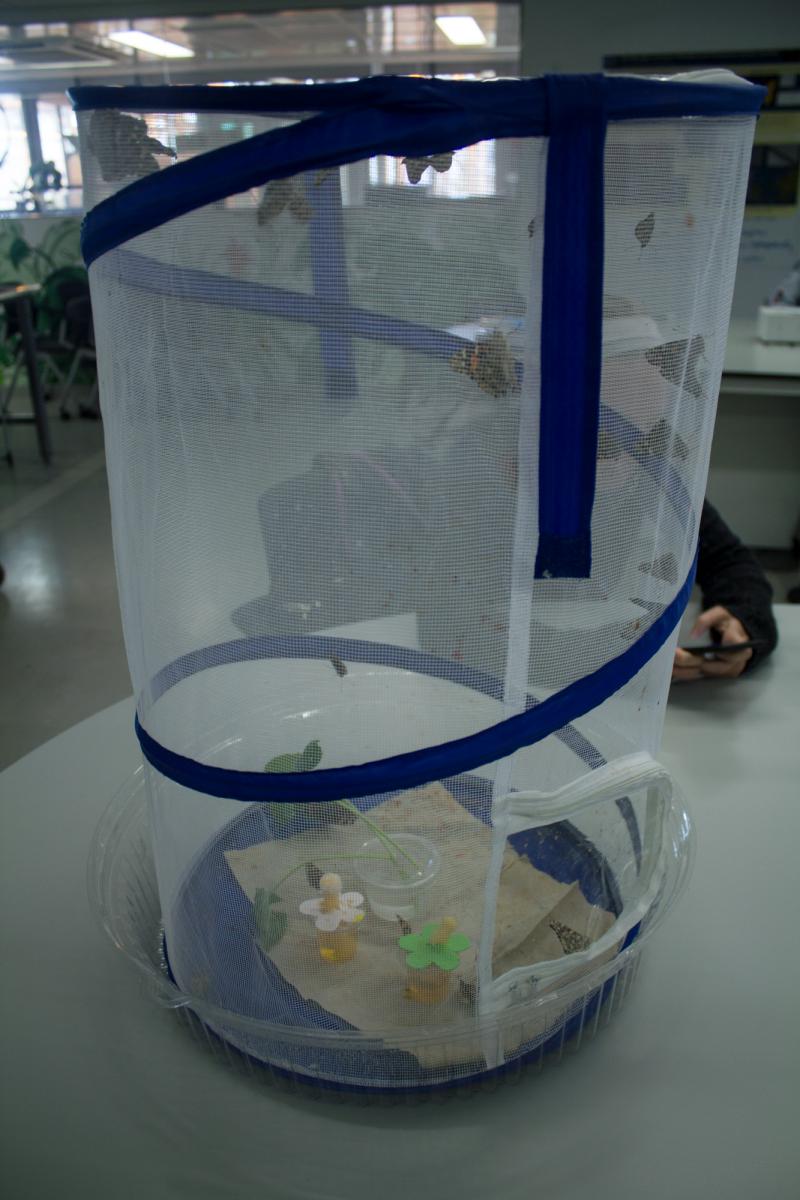 “What we do with CRISPR is nothing fancy. We don’t do genome editing or detailed surgery, we just break genes,” Martin told a group of visiting science writers in October.

Martin’s lab explores questions of development and evolution, but CRISPR’s potential extends to new treatments for human diseases, crops engineered to withstand intense rains or long droughts and foods stripped of allergens. The ethical quandaries are also vast, as highlighted recently by a Chinese researcher's claim to have used the technique with human embryos.

The other writers and I each got to try the CRISPR technique. We started with a small dish containing a bunch of butterfly eggs on a sticky surface. The eggs were visible to the naked eye as tiny blue-ish dots.

A look through the microscope revealed much more detail, showing they are, in fact, egg-shaped, with one end a bit flatter than the other. We were instructed to nudge them gently with a thin glass rod until they stood on that flat end. It’s harder than it sounds.

When I finally got a few eggs in the right position, I took my dish to a different microscope that was connected to an electric needle full of a reddish fluid. The liquid contained the CRISPR Cas9 protein tool and and something called “guide RNA.”

Researchers compare the gene editing process of CRISPR to a search-and-replace function in a word processor. First, the exact phrase, or genetic location, is identified. Then, it is cut out and other genetic material can be inserted.

“The guide RNA is the specific directional vector that will direct the Cas9 to specific sites in the DNA, to cut there,” graduate student Vincent Ficarrotta explained, adding that the the DNA repairs itself around the cut, and the egg develops normally from that point forward. 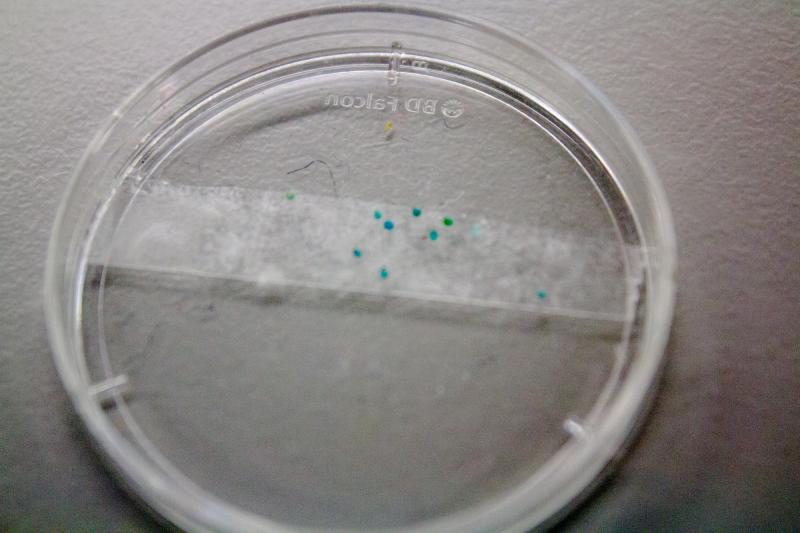 It took some help from one of the research assistants before I managed to align my egg with the needle. When it was in the right place, I tapped a foot pedal and watched through the microscope as red goo oozed into the tiny egg. Experienced scientists can inject a hundred eggs in one sitting. I did barely a few.

There’s no outcry against this lab’s CRISPR work, which is primarily funded by the National Science Foundation. Compare that to last month, when a Chinese scientist announced at a meeting in Hong Kong that he’d used CRISPR to alter DNA in human embryos to protect a set of twins from AIDS.

Colleagues decried his disregard for the peer review process and questioned the truth of his claim. But scientists and ethicists were left fearing the pending arrival of designer babies, or children genetically altered in utero to suit their parents’ preferences.

Martin said he discusses bioethics and appropriate uses for the technology with his students, encouraging them to “think about several levels of consequences”; for example, how a genetic change will affect future generations of a species.

If used responsibly, Martin said, CRISPR could help solve many challenges, including in agriculture. 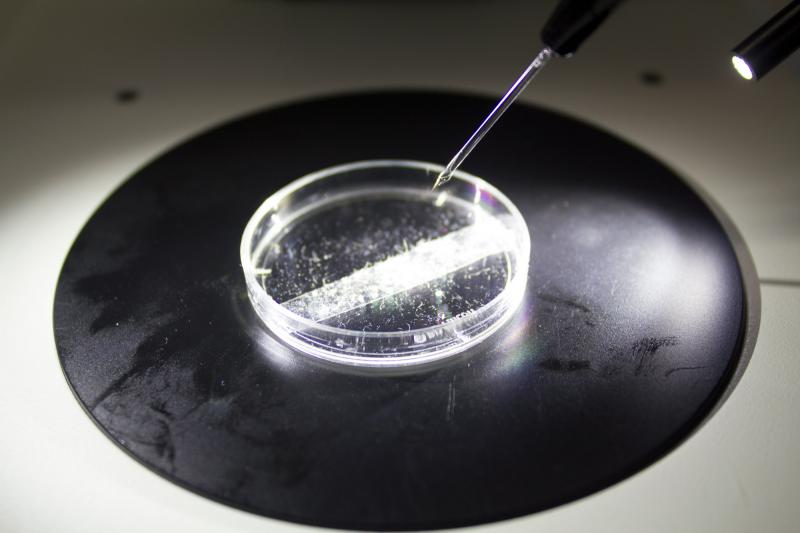 “If you want to feed the planet, 9 billion people, I think we will benefit from accelerated domestication from engineering crops so they are less demanding in terms of resources, less vulnerable to pests or less waste, better use of land and so on,” he said.

CRISPR’s use in plant breeding is a bit less controversial than in humans or other animals as seeds can be manipulated so that genetic changes don’t persist into offspring. Agriculture companies already have their eyes on the technique.

“It's a development that we're very excited about,” Bayer Crop Science president Liam Condon said in October, when he was in Des Moines for the World Food Prize.

Companies want the public to understand up front the value of a new technology, he said, echoing what Harvest Public Media reported in 2017.

“One of the issues that we've always had with GMO technology,” Condon said, “is that the benefits are very clear for the grower, for the farmer, but they're not so clear for the consumer.”

He’s confident that CRISPR’s potential to remove food allergens or boost nutritional quality will appeal broadly. What he’s more concerned about is how different governments will approach regulation, as GMOs taught the industry an important lesson after different approval timelines held up overseas deliveries of some U.S. crops.

“It is important that there's kind of a consistent regulatory framework to ensure international trade with whatever is developed using CRISPR Cas 9,” Condon said.

For now, countries are on their own to determine whether new policies are necessary because there is no coordinated effort to establish international regulations. But the flurry of interest sparked by the announcement in Hong Kong may prove the catalyst for a seeking a global consensus sooner rather than later. 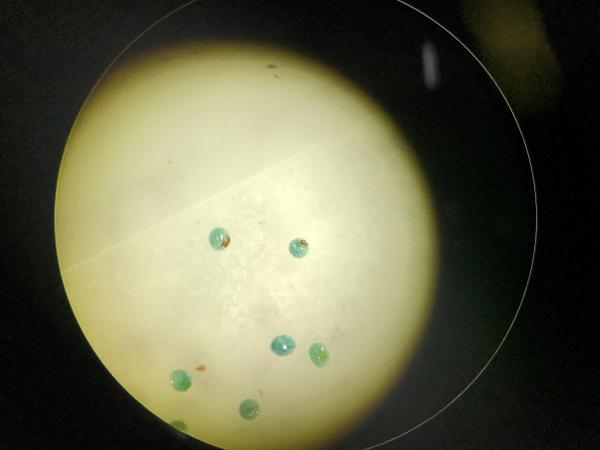 A changing climate has major implications for farmers and ranchers across the U.S., according to a federal report.

Here’s a select breakdown of the agriculture section of the fourth National Climate Assessment, which was released last week.

Beyond The Farm: A Look At The Wide World Of Ag Degrees

Fields, crops and farm animals are part of the agriculture-industry landscape, but an increasingly small one.

The number of farm and ranch managers shrunk by about 20 percent between 1996 and 2016, according to the Bureau of Labor statistics. At the same time, there are more students graduating from ag colleges, and, in many parts of the country, 80 percent to 90 percent of them find a job (or go for an advanced degree) within a few months of graduating.

Forecasters say the El Nino weather pattern in the Pacific Ocean should lead to slightly warmer and wetter conditions across the Midwest this winter. That’s good news for some farmers who struggled with drought over the summer.

Slow speeds, bad coverage and expensive service: These are just some of the concerns contained in nearly 300 public comments on Rural Broadband Pilot Program proposed by the U.S. Department of Agriculture, a review by the Midwest Center for Investigative Reporting found.

Updated at 11 a.m. Nov. 26 with a correction — A southeastern Missouri cotton and soybean farmer has the distinction of being the first person in the United States to face federal charges over alleged dicamba misuse.