Hybrid seed corn and nitrogen fertilizer transformed farming in the 20th century, but they are also closely tied to some of today’s major agricultural challenges. That has prompted some members of two families that played pivotal roles in developing farm innovations to work on putting a lighter, 21st century stamp on the landscape.

In Carlisle, Iowa, Rob Fleming still uses the 1947 Ford 2n tractor he drove on the family farm as a teenager. Back then, neat rows of corn lined his family’s fields. Not anymore.

“There's a 20 acre prairie right here,” Fleming says, gesturing out the window of his childhood home, “which is the first restoration.”

Native plants such as big bluestem, yellow coneflower, and milkweed grow tall but also have deep roots that hold soil in place. Even after clearing invasive species and planting the desired ones, it can take a few years for prairie plants to establish. Once they do, they naturally keep most weeds at bay.

Fleming’s great-uncle, Henry A. Wallace, created hybrid seed corn, a science-based breeding system that produced uniform seeds, leading to drastically increased production yields. Wallace and several partners formed a company in the 1920s that lives on today as the “Pioneer” in DuPont Pioneer, but is no longer directly connected to the Wallace family.

These days, hybrid seed and the twin innovation of that bygone era, nitrogen fertilizer, are standard farming tools. They are blamed for some of the industry’s biggest challenges, such as oversupply that pushes down prices and chemical runoff that pollutes rivers. 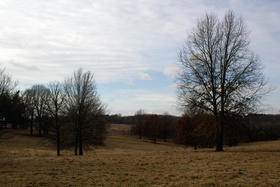 Fleming came to recognize this as he studied to become a landscape architect in his adopted city of Philadelphia decades ago.

“It seemed obvious to me that modern agricultural practices were potentially damaging to soil structure and soil health,” Fleming says, and he realized he had never even seen an intact prairie ecosystem despite growing up in Iowa. It took him a long time to come back home and set about making changes on the landscape.

When his parents died, he decided to buy his brothers out of the family farm and bring back the prairie and oak savannah, two native landscapes that all but disappeared from the farm areas of the Corn Belt during the 20th century’s row crop explosion. Among other Wallace descendants, he says there is a similar shift away from what is today conventional farming.

“If you were to do some kind of survey of the extended Wallace family,” Fleming says, “they would be in favor of sustainable agriculture.”

Fleming says the Wallace family always valued the land. Many Wallace descendants have supported a variety of sustainable agriculture groups, including one that bears its name, The Wallace Centers of Iowa. The Wallace family shift from inventor of modern production tools to promoters of lower environmental impact is in keeping with the family ethic of embracing tools that drive success, says historian Tom Morain.

“It was Garst who had the boots on the ground and (was) willing to go, not quite door to door, but put the sales pitch into Pioneer Hi-Bred,” Morain says. 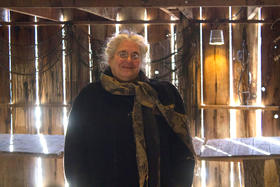 Garst and her family donated land to create Whiterock Conservancy, a nonprofit that, in addition to restoration work, still has active farmland.

“This is as good a conservation farm as you will ever see,” Garst says, stopping her car at one of the fields.

The Whiterock farm uses terraces on hillsides, grass waterways, and cover crops -- all strategies intended to manage water, keep nutrients from flowing off and into rivers, and prevent soil erosion.

She wants farmers to hear how sustainability is compatible with making money. And also, how it can improve their land. Garst says her grandfather’s philosophy was “always learn and innovate.” One thing she has learned is that too much of his beloved nitrogen creates problems, such as the fertilizer runoff polluting the Des Moines drinking water supply.

In their day, both Henry A. Wallace and Roswell Garst did what they thought was best for farmers and the land. And today, their descendants are trying to do the same.

“Very much the culture of my family is to try to make the world a better place,” Garst says, “And my grandfather was always a big advocate that you, you, can do something. You’re an independent actor and you can do what you think is right. And that’s a wonderful legacy to come from.”

Even if it means undoing damage unintentionally caused by your predecessors’ success.

President Donald Trump has nominated former Georgia Gov. Sonny Perdue as Agriculture Secretary, bucking a recent trend of Midwest leadership at the U.S. Department of Agriculture and making many in the farm country of the Midwest and Great Plains a little leery.

Coupled with the appointments of leaders from Oklahoma and Texas to head the Environmental Protection Agency (EPA) and the Department of Energy, respectively, there looks to be a shift in the power center of the parts of the federal government that most directly impact agriculture.

The state of the farm economy is helping agricultural groups and farm-state lawmakers make their case for preserving and possibly increasing funding levels in the 2018 farm bill but some last week argued against it.

As Politico reports, the Heritage Foundation, the Environmental Working Group and Taxpayers for Common Sense argued that the current downturn in an inherently cyclical market shouldn’t be used to maintain the status quo on farm policy.

To diversify the landscape, diversify who works it

Farmers in the U.S. like to point out that their products feed people all over the world. And while this is a diverse country, the people working on farms and elsewhere in agriculture often don’t reflect the nation’s demographics. Changing that is becoming a priority, in hopes new people will bring fresh ideas to meet some of our food system’s greatest challenges.

Colorado rancher shows support for Trump in a big way

An eastern Colorado rancher is showing his support of President Donald Trump in a way only a rancher, or farmer, could come up with.

As 9 News reports, rancher Doug Koehn of Limon, in frustration at some of the negativity coming from opponents of Trump, hopped on his plow and carved the word “TRUMP” in big block letters into his field.

In search of profit, some conventional farmers may go local

Low crop prices have many Midwest wheat and corn farmers looking for ways to supplement their incomes. One possibility for conventional farmers: producing food for farmers markets.