Attorneys for the state and the Legislature faced a barrage of questions from skeptical Kansas Supreme Court justices Tuesday scrutinizing the Legislature’s school finance plan.

Solicitor general Stephen McAllister and Jeff King, a former Senate vice president, sought to fend off claims from school districts that Kansas is doing too little to make up for several years in which budget cuts and funding stagnation became the norm and school budgets fell behind inflation.

The justices repeatedly interrupted their arguments to seek deeper clarification of calculations the state cited to justify adding $293 million to school funding over the next two years. And they showed some interest in potentially retaining jurisdiction once they have issued their ruling, to ensure the state complies.

Digging into the math

Among the justices’ concerns in this latest round of the legal battle was a statistical analysis of student achievement that the Legislature generated this spring and used to extrapolate what statewide funding should be. The calculation was based on spending levels at 41 school districts found to be performing well on certain academic outcomes.

Explore a timeline of the seven-year Gannon v. Kansas lawsuit

“I understand the math,” Justice Dan Biles told McAllister. “I need to know what makes that reliable and valid, and I’m not seeing it here.”

The justices homed in on methodological particulars, such as the use of averages instead of medians and whether the omission of budget changes at six school districts could have skewed the results. And they questioned whether lawmakers had cherry-picked portions of past school finance studies to minimize the state’s financial obligations.

Justice Eric Rosen asked about the state’s reliance on local property taxes to fund education through a system that allows school boards to elect to spend more. The concern is that poorer school districts are less likely to do so because of the burden on local taxpayers.

“What happens to those children?” he said, referring to students in those areas.

Their attorney, Alan Rupe, urged the justices to find the $293 million funding increase inadequate.  Rupe contended that it’s worth as little as one-third of what is actually needed statewide, and is particularly unfair to poorer school districts.

The state’s plan flouts the court’s previous rulings, he argued, “moving the target away from what your instructions were, to something less.”

In 2014 the Supreme Court found that the state’s K-12 funding should be at a level suitable to help students acquire the foundational skills they will need in life. And in March the justices asked the state to address the fact that one-quarter of Kansas students are struggling with math and reading — and even higher proportions of minority children and children from low-income families.

McAllister and King argued the state is meeting its obligations to struggling children by requiring that schools spend part of their budgets on helping them and by increasing funding for preschool and kindergarten.

Rupe, however, said the state could find true guidance and expertise on appropriate spending levels by consulting the Kansas State Board of Education, a body of 10 elected officials that oversees the state’s public education system.

By law, the board must produce annual funding recommendations. It has recommended a nearly $900 million increase.

Speaking after the proceedings, Senate Majority Leader Jim Denning, of Overland Park, said the State Board of Education’s recommendation is out of reach because it would entail major tax hikes or deep cuts to other government functions, such as health care or prisons.

Raising taxes was one of the thorniest issues of the 2017 legislative session, which finished in June. Lawmakers struggled to close a nearly $1 billion projected deficit. After multiple attempts at a resolution, they repealed Gov. Sam Brownback’s signature 2012 income tax cuts, including exemptions for owners of more than 300,000 businesses.

“I think that is the only answer. It’s essential,” she said. “I worry a lot that we’ll repeat what happened in the Montoy case if jurisdiction does not remain with the court.”

Lane was referring to another seven-year school finance lawsuit, which closed in 2006 after the state crafted a three-year plan to gradually add in more than $750 million in annual funding for schools.

The Montoy plan fell by the wayside when the recession hit and governors Kathleen Sebelius and Mark Parkinson slashed hundreds of millions of dollars from K-12 spending in 2009.

It was not later restored, prompting school districts to file a new lawsuit in 2010. They say schools have fallen hundreds of millions of dollars behind inflation.

Democratic Sen. Lynn Rogers, a member of the Wichita school board — another of the plaintiff districts — suggested the justices’ skepticism on Tuesday reflected the weakness of the state’s claims regarding its $293 million increase. 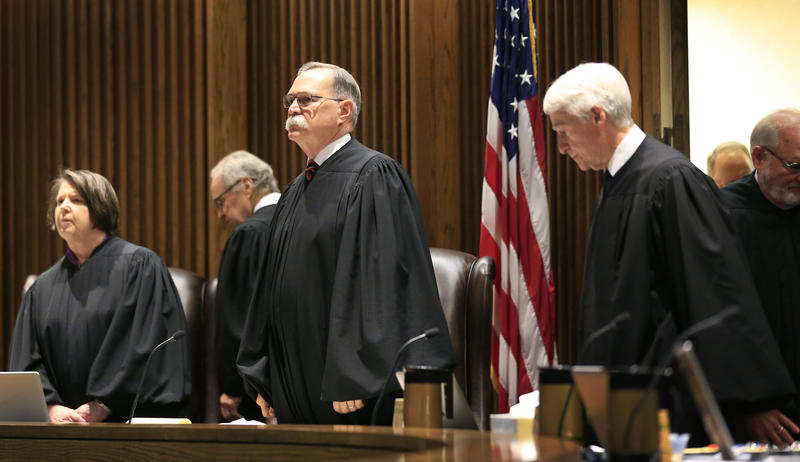 “The justices really had seen through many of the state’s arguments,” he said, “and understood that this wasn’t really new money, it was money they were putting back in. And it wasn’t even keeping pace with inflation if you look at the last three years.”

Denning, who directed legislative researchers to produce the analysis that the state is leaning on in its defense, said he thinks the Legislature did a good job of attempting a logical calculation for funding schools.

The Supreme Court had asked for this type of rationale, he said, but “didn’t give us any direction going into it.”

“And I actually thought that they would be very pleased,” Denning said.

Celia Llopis-Jepsen is a reporter for the Kansas News Service, a collaboration of KCUR, Kansas Public Radio and KMUW covering health, education and politics. You can reach her on Twitter @Celia_LJ. Kansas News Service stories and photos may be republished at no cost with proper attribution and a link back to kcur.org.

Texas ranks 41st among states when it comes to child educational achievement. That’s nothing new; Texas has hovered near the bottom in this category for years.

5 Themes At The Heart Of Kansas’ School Finance Lawsuit

The Gannon v. Kansas lawsuit is in its seventh year. In that time, the case has led to repeated rulings against the state for underfunding schools and responses by lawmakers in the form of appropriations bills.

Lawyers for Kansas and for dozens of school districts suing it filed briefs Friday at the Kansas Supreme Court, in what could be the final leg of a seven-year legal battle over school finance.

The state argues legislation passed early this month ratchets up annual state aid to schools by nearly $300 million over the next two years, and that should be enough to end the Gannon v. Kansas case once and for all.

The Kansas legislative session may be over, but lawmakers still aren't sure whether their work has ended. They're waiting to see whether the new school funding system they put in place will satisfy the Kansas Supreme Court.

The court previously said education spending was inadequate. In response, lawmakers approved $300 million in new funding over two years and a new method to distribute the money.

Mark Tallman, with the Kansas Association of School Boards, says members of the group like the new funding formula, but they still have concerns.

Texas Panhandle school districts are pleading with the state for more funding.

As The Amarillo Globe News reports, a wind farm, as well as several oil and natural gas wells in Roberts County, Texas has given independent school districts in Miami and Bushland a robust tax base to draw from for paying for teachers and buildings, but the tax roll was cut in half this last year as oil and gas prices decreased and a state aid provision districts rely on to guard against economic downturns expires in September.

What Do You Need To Do In Response To The Kansas Tax Increases?

Taxes in Kansas will be climbing over the weekend because a tax increase approved by lawmakers is taking effect. The new law will raise income tax rates and reinstate income taxes for thousands of business owners.

For wage-earning employees, Williams recommends studying paychecks in July to make sure the income tax withholding has been increased.

The health care plan unveiled last month by the Republican-controlled U.S. Senate met with fierce opposition from hospital, doctor and patient advocacy groups. Among them was the National Rural Health Association, which is based in Leawood, Kansas, and represents doctors, nurses and hospitals in rural areas nationwide.

Hineman writes that overturning Gov. Sam Brownback’s “overly aggressive 2012 tax cut” was a return to common sense tax policy, resulting from lawmakers fulfilling promises they made to their constituents during 2016 campaigns.

The head of an organization that represents Kansas state employees is criticizing Gov. Sam Brownback’s administration for using a state agency to deliver a political attack on the Legislature.

Robert Choromanski, executive director of the Kansas Organization of State Employees, said it was inappropriate for the administration to send an email to employees of the Kansas Department for Children and Families that criticizes lawmakers for raising taxes.