Don't miss the latest episode of Classical Music Amarillo, the new regional music program on HPPR, hosted by Stephen Johnson. Showcasing the talent of the classical music community in the Yellow City, new shows air on Sundays at 12p CT; an encore presentation can be heard on Thursday night at 7p CT.

We're ringing in the New Year with the "New World" Symphony! Composed in 1893, when Antonin Dvorak was serving as Director of the National Conservatory of Music of America, this work incorporates the music of Indigenous people and African-American roots. During his stay in the United States, he became enamored, studying their music and speaking to its importance for future US composers. Yuri Bekker conducts The Amarillo Symphony. 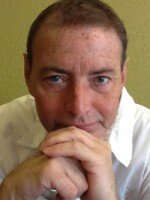 Stephen Johnson
As the host of Open Range, Steve Johnson brings a lifetime of hearing and performing a wide variety of music to this unique program. Growing up in a home where everything from opera to Bill Evans and the Beatles were heard and embraced, he studied piano in college where he became passionate about free-form radio where you might hear everything from punk rock to classic country or jazz in the course of a few hours. Open Range is your invitation to an hour of radio unleashed- presented with heart and humor. All you need for this adventure is an open mind and open ears.
See stories by Stephen Johnson