Thanks so much to Lawrence Hoerman and Buddy Laws for sharing some time with HPPR today in support of the Garden City Municipal Band concert series going on this month.

Every Friday night between June 21 and July 19, the band will get together in the Stevens Park Bandshell (502 N. Main St.) in Garden City, KS from 7:30 pm - 8:30 pm CT. Tonight’s show will feature Buddy Laws on euphonium.

This is the 141st year for the Garden City Municipal Band, making it one of the oldest community bands west of the Mississippi. It’s made up of adults and students of high school age and older from around the Garden City area. The regular conductor is Clint Raynes of Scott City, who is out of town this week at band camp in Breckenridge. Our substitute conductor is Shawn Martin, band director at Lakin.

More about the performers: Francis H. “Buddy” Laws, Emeritus Professor of Music, served as Wright State University faculty for 35 years, starting in 1972. Lawrence Hoerman serves as the board president for the Garden City Municipal Band. 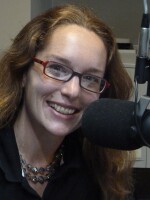 Valarie Smith
As an avid world traveller and gallivanter, Valarie never lost sight of which way was home. A Native to Western Kansas, she has been pursuing a life long career in the many forms of expressive arts including radio, photography, videography, graphics and design. Graduating from Western State College with a bachelors in Art, Valarie once again returns to percolate her love for High Plains Public Radio. Involved with HPPR since 2006, an inquiry about a drive way moment landed her a position as local host of Weekend Edition. Wearing many hats at HPPR such as program host and a regional program producer, Valarie now joins us as Director of Membership and Underwriting. (Oh, and she also hosts Songbirds! Check it out.)
See stories by Valarie Smith