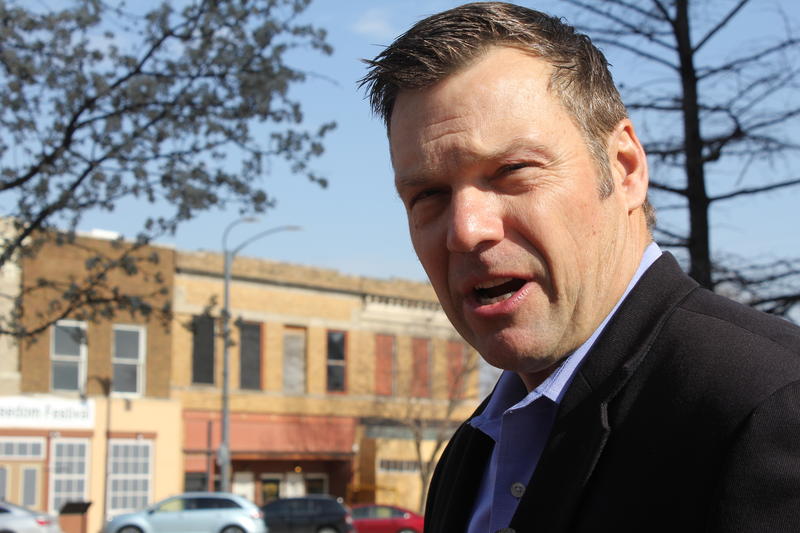 A federal judge will now review whether it’s reasonable for an ACLU legal team to charge Kansas Secretary of State Kris Kobach $52,000 for the time it spent asking a court to hold him in contempt.

The bill for attorneys fees and related expenses came Monday after the ACLU team won that contempt finding last month.

A judge found Kobach in violation of a court order after a dramatic contempt hearing last month. That hearing followed a tense trial that saw Kobach and the two other lawyers on his legal team verbally reprimanded time and again for failing to follow trial rules.

The contempt violations involved Kobach’s office failing to make clear to people who had registered to vote that they could cast ballots and to tell them where they could vote. Kobach’s office also failed to ensure county election officers would treat those voters the same as others.

Read the contempt ruling against Kobach

The approximately 30,000 would-be voters had initially been denied registration for not showing papers that proved their U.S. citizenship. Kobach championed the proof-of-citizenship requirement that was added to Kansas law in 2011.

In 2016, Federal Chief District Judge Julie Robinson, a George W. Bush appointee, ordered Kobach to let the blocked registrants vote pending the outcome of a lawsuit that accuses him of violating a federal voter registration law.

She held him in contempt for flouting that order.

“The notice of appeal has already been filed,” the office wrote in an emailed statement. “The position of the office is that the fees were erroneously awarded and therefore the disposition of this issue will not be known until the appeal is completed.”

Last month the Kansas House voted overwhelmingly to stop Kobach from paying any fees related to the contempt finding out of state funds. The lawmakers wanted the secretary to dip into his own pockets instead, but ultimately the Legislature didn’t write that into law.

Kobach’s office argues the contempt finding is against the secretary’s office as an entity, not him as a private individual.

This is the second time Kobach has faced fees or fines stemming from the lawsuit, Fish v. Kobach.

In 2017, he got hit with a $1,000 fine for misleading Robinson about what was written in a document he took to a meeting with Donald Trump shortly after Trump’s victory in the 2016 presidential election. Kobach wanted the then-president-elect to help change federal law in a way that would sidestep the legal challenges he has faced in the Fish v. Kobach case.

Celia Llopis-Jepsen is a reporter for the Kansas News Service, a collaboration of KCUR, Kansas Public Radio, KMUW and High Plains Public Radio covering health, education and politics. You can reach her on Twitter @Celia_LJ. Kansas News Service stories and photos may be republished at no cost with proper attribution and a link back to the original post.

The American Civil Liberties Union launched a national voting rights campaign during a Sunday night event in Lawrence that was broadcast online throughout the country. It was the start of a grassroots effort, called Let People Vote, which the ACLU says is a chance to go on the offensive.

As The Hill reports, the advisory warns that potential travelers to Texas may encounter “illegal arrests,” “racial profiling,” and “demands to see your papers.”

What Kansas Lawmakers Did, And Didn’t Do, This Year (Hint: Not Tax Cuts)

Listen
Listening...
/
Kansas News Service editor Amy Jeffries talks with Statehouse reporters Celia Llopis-Jepsen, Madeline Fox, and Stephen Koranda about some of what lawmakers ultimately did, and didn’t, do.

In an election year with a state Supreme Court ruling hanging over their heads, Kansas lawmakers wrestled over school spending, taxes and guns.

They fought among themselves and often split ways from legislators they’d chosen as leaders.

In the end, they decided not to throw a tax cut to voters. It would have partly reversed tough political choices they made a year before to salvage state government’s troubled financial ledger.

Hundreds of LGBT activists held a rally outside the Kansas Statehouse in Topeka Saturday. They were protesting Governor Sam Brownback for withdrawing protections for state employees on the basis of sexual orientation and gender identity. The group Equality Kansas led the rally, where several state lawmakers and activists spoke. Micah Kubic (Mike-uh Cubic) of the Kansas branch of the ACLU told the crowd that Brownback’s actions have set the entire state back.